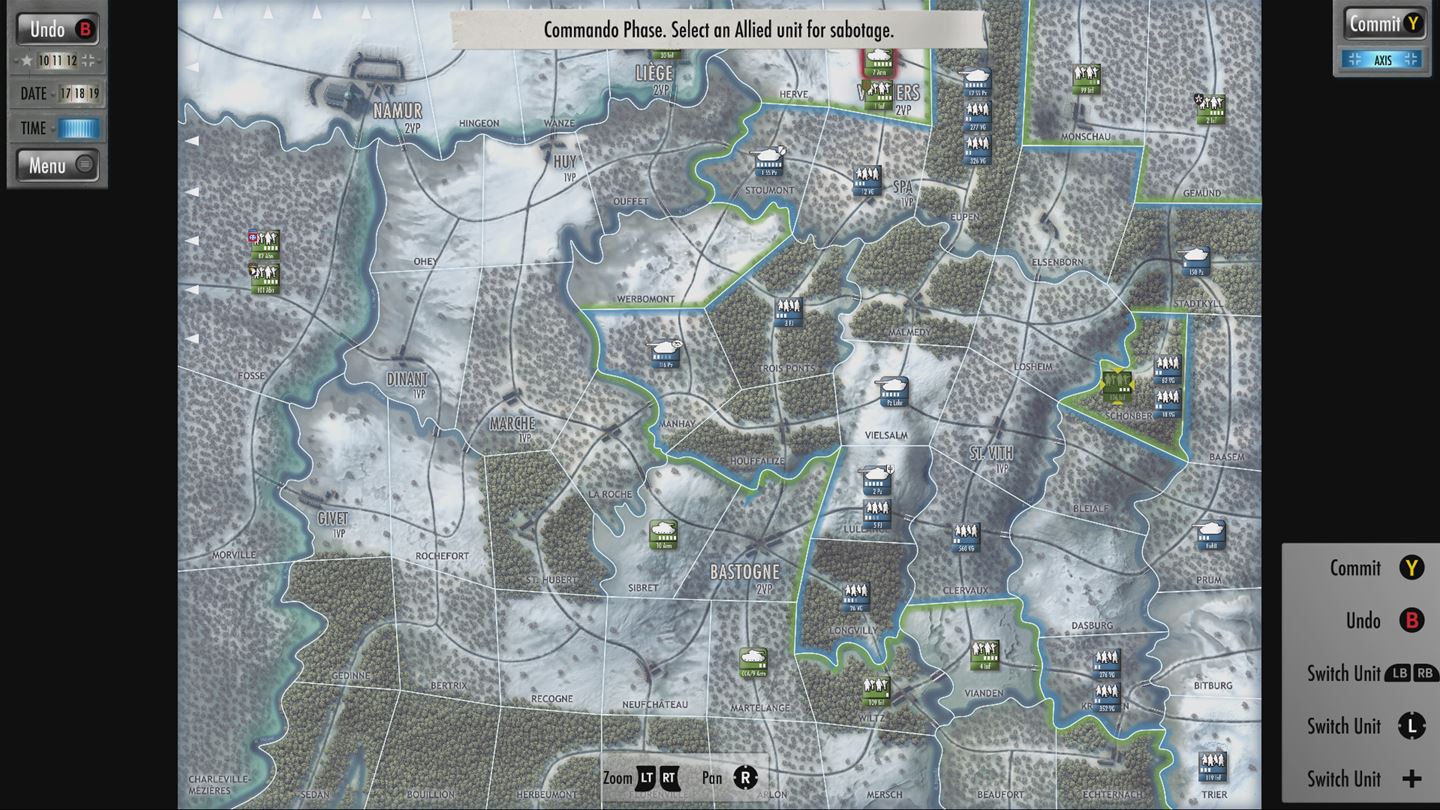 Battle of the Bulge is a turned based strategy board game based on the events that took place in 1944. In this struggle, the Axis (Germany) launches a surprise attack on the Allies (U.S.) in attempt to divide the U.S. and British troops that were in France. Instead what happened was that the line the U.S. held was pushed back where they were attacked, giving it a “bulge.” Of course, this is a video game, so, not all of those facts matter here.

Battle of the Bulge has been broken down into five modes; two shorter battles from different starting points and three variants on playing out the full fight. You can play every scenario from either side, Allies or Axis. Each side has three different Army Generals for you to go against, all of them having their own strategy and tactics. Battles, however, are not won by just who’s stats are better, although that does help, a roll of the dice (figuratively speaking) also comes into play here. 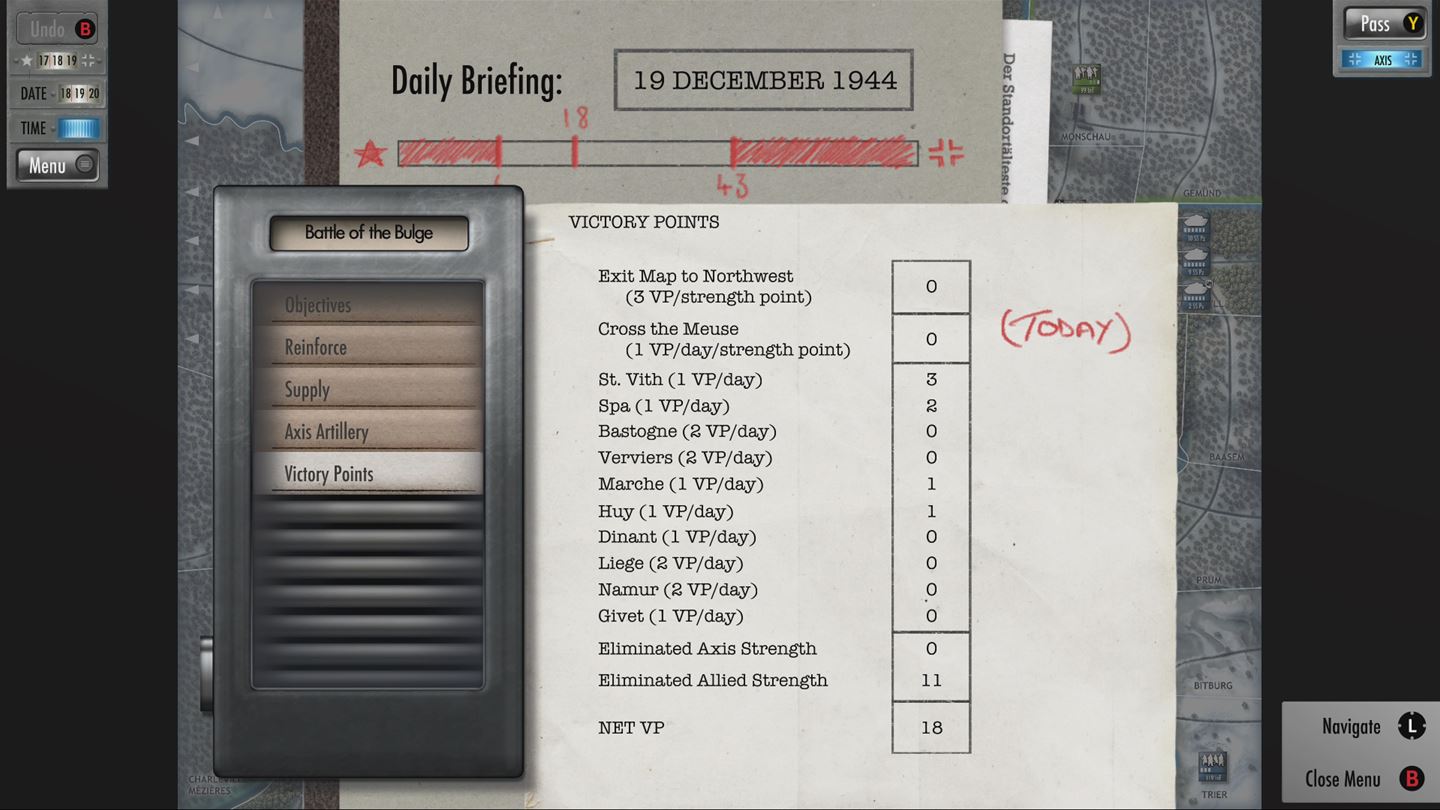 Scenarios and Generals — are a huge part of what makes this game work. Each of the six Generals has their own tactics that they will try and use to beat you. Some will be overly aggressive trying to hit you with sheer force whereas others will try to win by cutting off your supply chain. These variants give each scenario a little more longevity as it will play out differently time and time again. Being as this is one battle, I was nicely surprised to see they had still managed to break it up into five scenarios or starting options if you will. Two of them are quicker matches letting you play through either the first three days (Race to the Meuse) or the last eight days (The Endgame). The other options have you playing through the heart of the battle (Dec 16-28) in a multitude of ways. In Battle of the Bulge, the campaign ends when you accomplish all scenarios, or the 28th comes whereas, in Bitter End, you play all the way through the fight no matter what side is winning. The last option is Lucky Draw, which still places the troops in the historical starting position, but shuffles what forces are where at the start of each game.

Local multiplayer — is called hotseat, and you play with one controller or two, which is brilliant. Hotseat is definitely where this game becomes fun and very challenging. That is, of course, depending on if you have local friends. All battle starting options are available including Lucky Draw, which still uses the same setup.

Simplicity — is key in games like this. Many times developers feel the need to make cut-scenes for troop encounters. Sure, if done right they can be entertaining at first, but they always just get in the way and slow down progress. Developer Shenandoah Studio seems to understand this completely and has no extra or unnecessary flash. They offer just enough information, so you know where you’re going and what you will be battling once you get there. No corny announcer is trying to ‘spice’ things up or redundant combat animations, and for that, I say thank you. 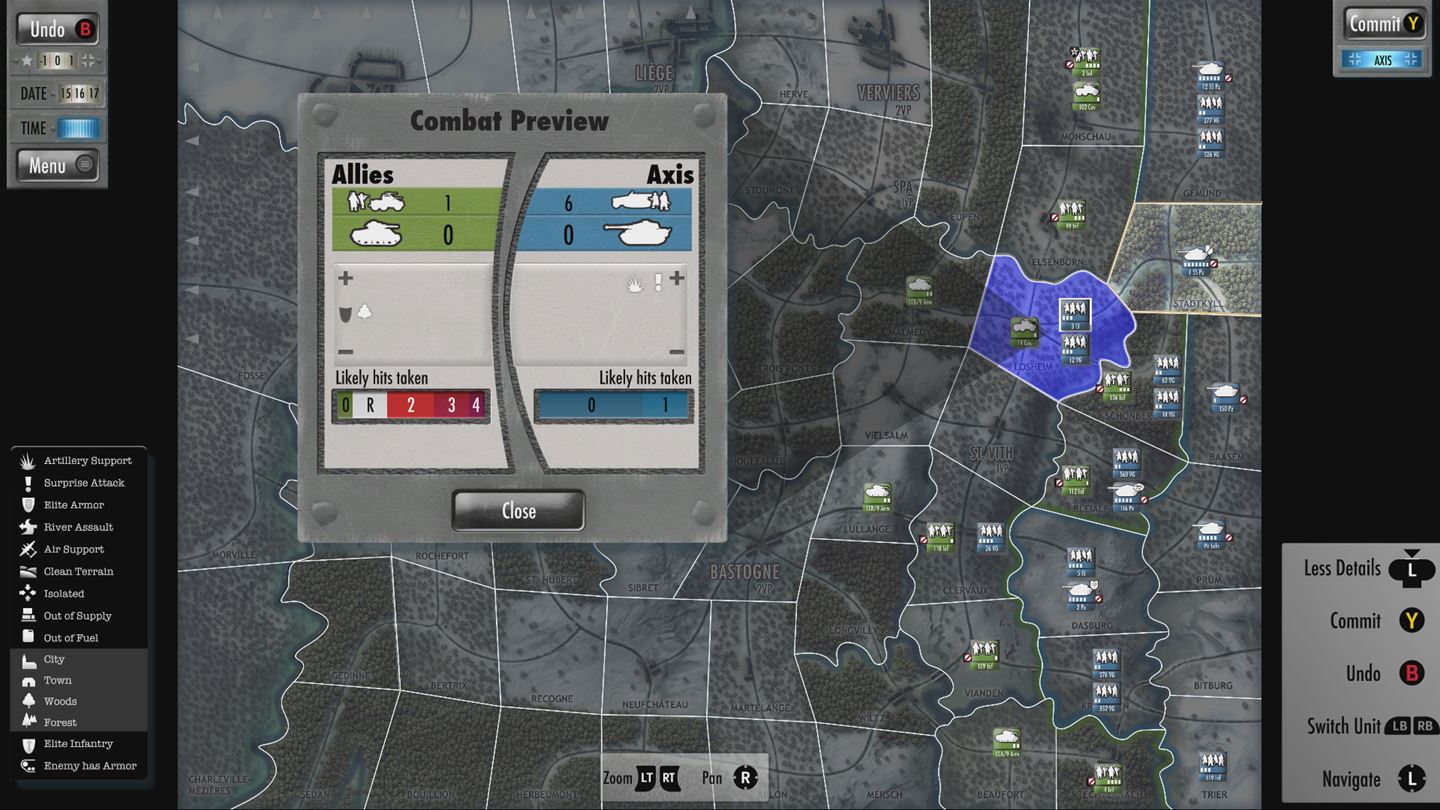 The tutorial — is supposed to teach someone who has never played your game how to play the game. Having different levels of a tutorial makes sense in games since you have novices to genres and then old pros who just need to learn your particular control scheme. There is an option that says tutorial and even another that says basics, but they offer you the bare minimum. When you play a strategy game, you need to know what every armor class does, how and why individual troops can move or what advantages or disadvantages they may have. Most of that is not taught or offered, and I quickly discovered I was going to either have to learn it through trial and error, osmosis or turn to good old YouTube.

No online play — in a strategy game almost feels like a cardinal sin. As I mentioned before, the local multiplayer, hotseat, is excellent. But if you don’t have local friends or at least ones who play strategy games, then what’s a gamer to do? Not offering an online option is a considerable oversite and ultimately limits the replayability it should have.

No difficulty setting — is something at this point in the games industry is outright unacceptable to me. The whole point of creating a video game is so people will play it and why will they play it, because they find it fun. Not offering the ability to lower the difficulty so that I have a chance to win, especially as I learn, can kill the fun. When my 11-year-old son says that looks neat, I should be able to drop the difficulty for him since we are not on the same cognitive level. Now mind you, I understand that strategy games aren’t supposed to be easy, but I feel video games should scale to the player. 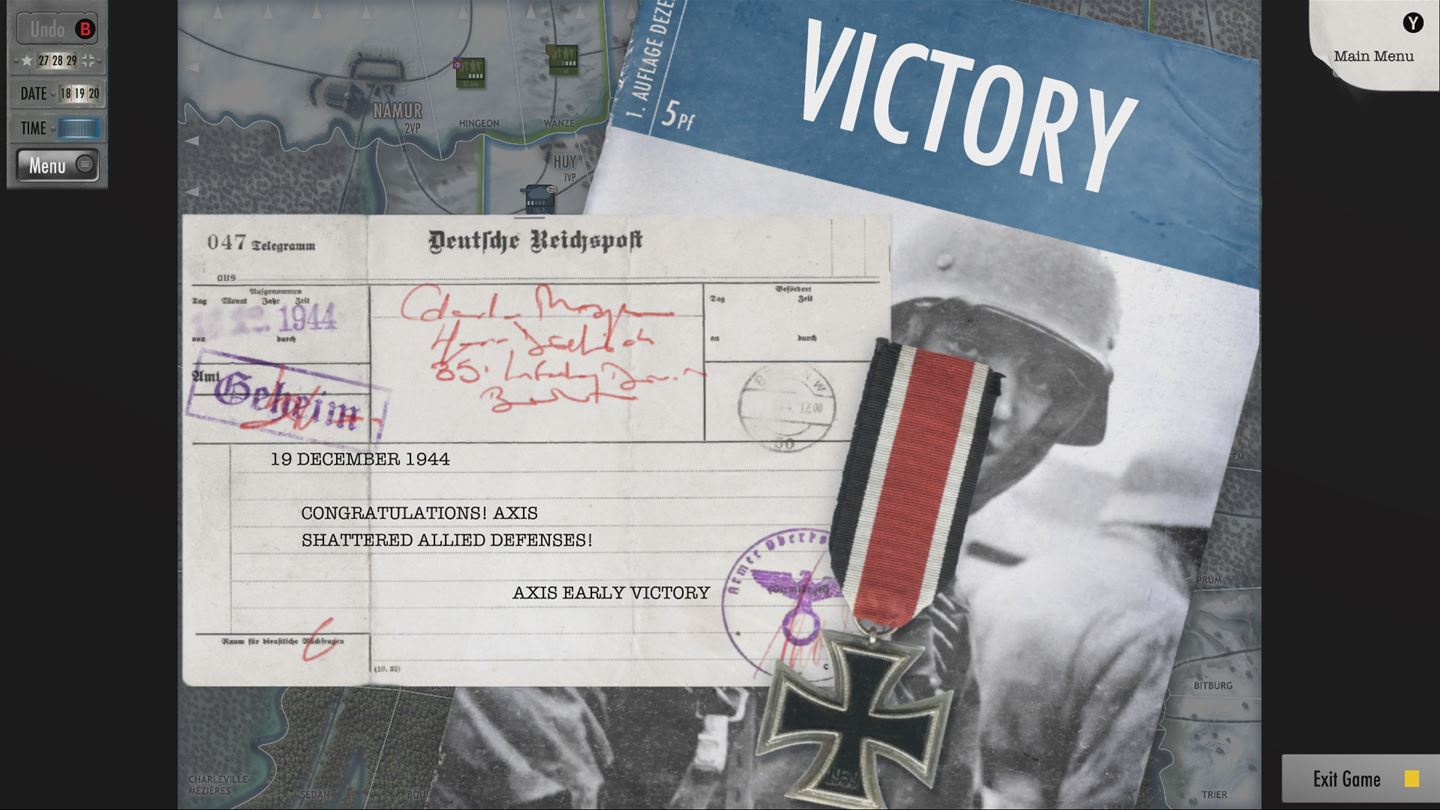 Battle of the Bulge is a basic board and dice style strategy game that holds true to the genre’s format. Although it isn’t a bad game, Shenandoah Studio misses the mark on several levels. The lack of an in-depth tutorial or in-game manual leaves you struggling when you start playing as you’re trying to learn. The game is very bare bones, and that’s not necessarily a bad thing, but in this case it half is. From a historical aspect, not much is explained as to where, when or even why this significant and important battle takes place. This lack of storytelling leaves me wondering; why pick this particular battle? Although Battle of the Bulge offers several ways to play and a simplistic style that isn’t overwhelming, you are still left wanting more from it and not in a sequel kind of way.

Battle of the Bulge was Developed by Shenandoah Studio and published by Slitherine Software. It was released on August 24, 2017, for $9.99. A copy was provided for review purposes. 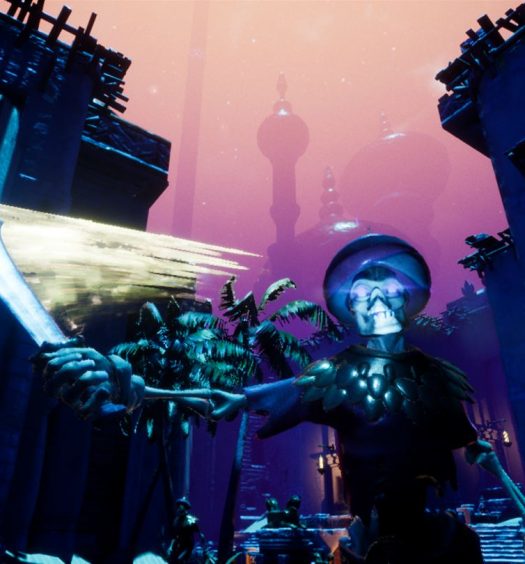 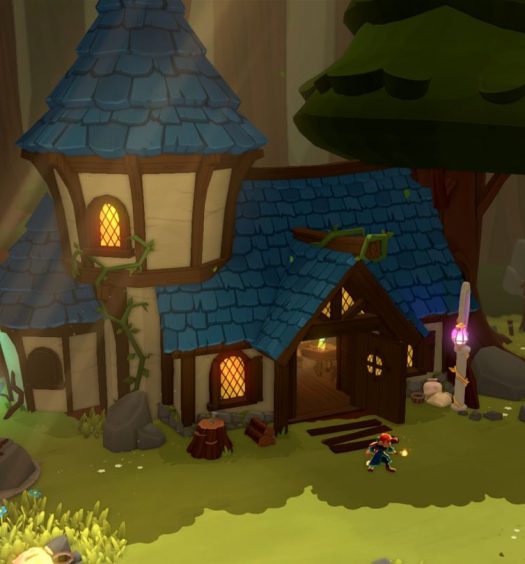