Strania is a vertical shmup where you control a mech trying to reach Vower, a distant star in the universe. The story is as generic as they come, but who cares? It’s a shmup. You shoot things and avoid crazy bullet patterns. The story is so irrelevant to this game that it is hidden in the 5th and 6th pages of text of the “How to Play” section in the Options menu. The true beauty in any shmup is the unique features that set it apart from the many shmups available on the Marketplace. Strania is neither a superior or a below average shooter. There is some potential shown with it’s unique features but there are also a few issues making it a tough recommendation for most gamers. 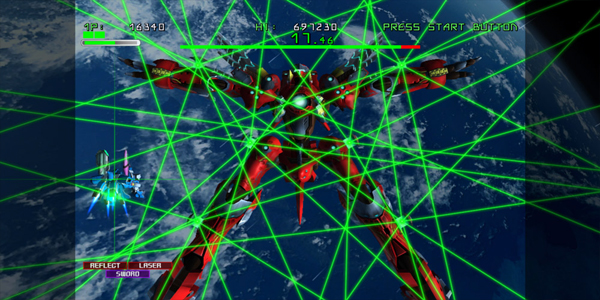 Unique Weapon System – Strania features a 3-weapon system. Your mech controls 2 weapons simultaneously with his left and right arms while storing a 3rd weapon in his reserve. The option to switch weapons you are using is available at anytime by pressing the “B” button. This makes any section of any level fairly manageable. Collecting 2 of the same weapon type with a specific arm will level-up weapons making incredibly effective combinations. Dieing will not reset weapon slots, which is a relief. And there are quite a few different weapons allowing a large level of variety and customization. Strania does the weapon system quite well and hopefully some other franchises will follow in their footsteps. No threat of losing your level-2 Vulcan and Rocket weapons is a huge relief and it allows the player to take more risks.

Clearly marked hit box – There is a small vertical and horizontal line on the mech character that intersects in the middle of his armor. That small area of intersection is the only area necessary to protect and it stands out like a sore thumb. With the large amount of colors and moving parts in Strania, it really is quite an achievement to make 2 small green lines stand out as such a prominent feature. Even with mass green laser attacks from enemy bosses, your hit box will still be easily found. This is a very much-appreciated feature in any shmup.

Overdose system – Most shmups allow players to gain bomb attacks that clear an entire area during times of chaos. Strania is very different in the fact that it allows players to work towards invincibility (Overdose) power-ups, which can occur 2-3 times per level on average. The true genius of the Overdose system is when it automatically triggers itself when the mech is hit with anything. Every game needs to add this feature. Imagine how much more effective gamers could be if they weren’t constantly worried about triggering power-ups at the perfect moment. 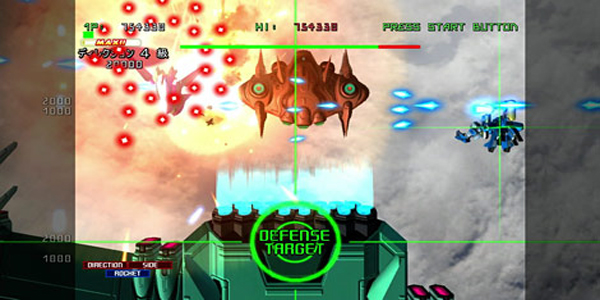 Boss fights are too difficult – Most gamers won’t finish this game. The more you play, the more credits you unlock, just like every other shmup. But unlike every other shmup, a credit does not restart the game where you last died off. Instead a checkpoint system is in place with an insane amount of checkpoints per level. Sounds great right? Well, the problem with this system is that every boss fight has a checkpoint before it begins. Meaning that you have to manage to defeat every boss in less than 5 hits. This is nearly an impossible feat when you encounter the last boss. At some point, gamers need to be awarded more hits per credit, not more credits overall. Without that, there is a very strong chance that every game will become a half hour waste of time as you progress to the final boss battle with ease only to lose that battle 5-7 times…again. In general the game isn’t too difficult, but a few of the boss fights are brutal to say the least.

Too short – As mentioned above, the game is only an average of 30 minutes per playthrough. There are 6 very short levels and one incredibly difficult boss battle. The amount of content you get for your money is not very high. Sure a lot of other shmups have 5 or 6 levels as well, but their levels are noticeably longer. Levels in Strania tend to be 5 minutes at the most. At the 800MS point price tag, there are a few other shmups on the Marketplace with much more content than Strania for the same price.

Strania ends up being a very average ride through the shmup genre. Intense gamers that are fans of the genre will likely enjoy the experience despite its short length and brutal boss fights. The average gamer will likely be turned off by its look, length and difficulty. This really is a decent game but it is nearly impossible to recommend anyone blindly purchase Strania. Games like this are the reason that demos exist for every XBLA game.

Strania is a very interesting shmup with really cool aesthetics and neat weapon system. It’s just a shame the game is overtly hard really quick. Most of the people that developed this game did work on games for Treasure like Ikaruga and Konami with Gradius V, so seasoned shmup developers were on-hand for this. But unless you’re a die-hard fan of the genre, then you’ll find an overwhelming challenge in this game. If you’re looking for a gateway into the shmup genre, start with Ikaruga or wait for the upcoming Radiant Silvergun. Strania’s a fun exercise in shooting but will most likely give you a strain.