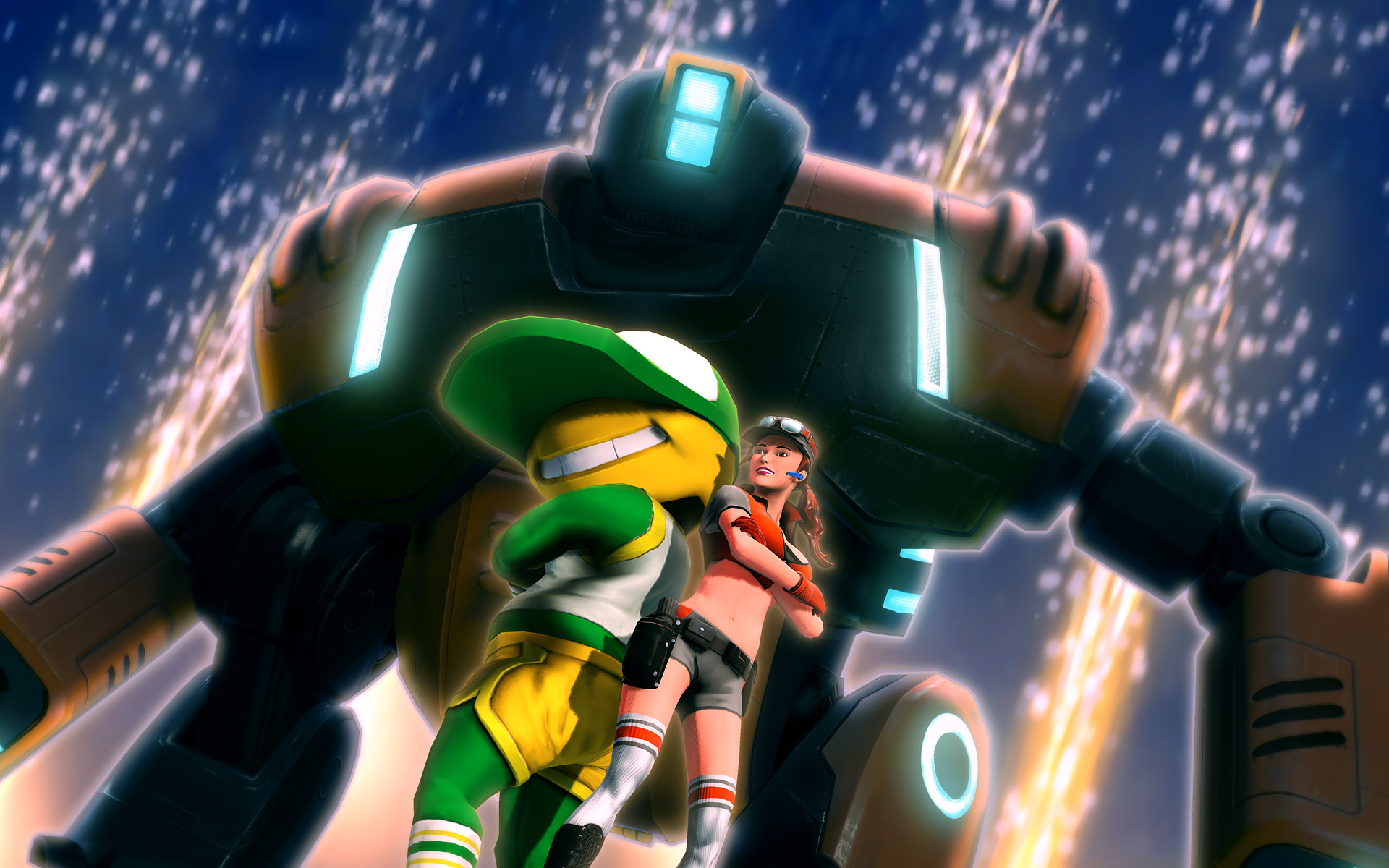 If you haven’t picked up a copy of Monday Night Combat yet, I am going to ask, why?  The game is absolute awesome sauce that has gotten rave reviews from just about every gaming site out there.  I am not sure why we haven’t done one here at XBLAfans yet, but I will get to the bottom of that. Anyway,  Gabe, from Penny Arcade absolutely loves the game, so there is no reason to not spend the 1200MS Points ($15) and get it.  So, go get it NOW!  I’ll wait.   No really, I will wait.

Okay, now that you got it you should have just downloaded the DLC for the game as well since it comes to you at the unbelievable price of free!  That’s right, the first DLC for the game is free as a “we’re sorry Microsoft forgot to certify our title update for over a month.”   No really, back during Spetember and October, they put in their title update to fix some of the bugs and exploits in the game, and Microsoft ended up dropping the ball on it.  It took Microsoft a month to certify the update, hence why the first DLC is free.

If you haven’t read any of the other news stories I have written about the DLC, you can here.  Or, you can just keep reading here because I am going to mention everything.

First thing I noticed with the update, is that they polished up the graphics a little bit, at least I think they did.  The game looks a bit crisper and clearer on my screen, and I LOVE IT!   They also added new loading screen animations that are definitely worth it, and one of them is drool worthy.  A hotshots pitgirl chest bumping the icemen pitgirl can melt even the coldest of hearts.

The Survitol Arena is the new one for the blitz mode.   Blitz mode, for those unfamiliar, pits you and 3 friends against wave after wave of bots from the game.   You need to defend the money ball by any means possible.  This game borrows heavily on the tower defense kind of game.

The new arena is relentless!  The bots come in from 4 different angles, and there are raised platforms that like to spawn gap shots, making it harder to kill them.   Gap shots will destroy all the turrets you have build around the money ball, while the normal bots charge in.   When you get into the higher levels, the bots feel like they are running into your base as fast as they can.   With myself and 2 other friends, we made it to wave 72 and we give the arena a huge thumbs up!

The new crossfire arena, called Spunky Cola Arena,  is nothing less than epic.   The 4 arenas that came with the game to begin with have both teams bases, and then you also have a large “area of play” where you need to push bots, and kill the opposing pros.   Spunky Cola Arena has the two bases, and then a very small area of play.   The bots  get into each other’s faces pretty early on and it turns into a pro v pro slug fest early on.   While pushing the bots is important to take down the other teams money ball, control of the small middle area is also just as important.   It’s a fast paced combat arena that I personally enjoy a lot.

There are some other really nice tweaks to the DLC that make it worthwhile.  Micky Cantor, the Monday Night Combat Announcer, ended up getting many new lines of dialog.  They added a new food pick up in the form of Churros, which give you a boost to healing and skill refresh which is nice.  Not as good as bacon, but good.    They also added 47 new protags for you to earn and show off to your friends.   Sadly, they didn’t add any new achievements, which is the only negative to the DLC.

I would have actually paid up some Microsoft points for this add on, but since it is at the great price of Free, there is no reason why you shouldn’t pick it up.   And if you still don’t own Monday Night Combat yet, What are you waiting for?  Trailers?   They are below.  Screen shots, in this article here.