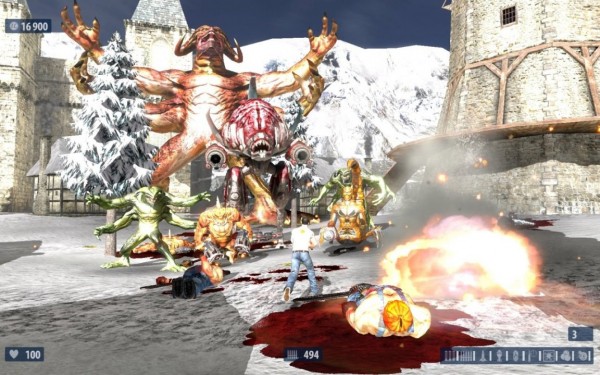 It’s always better to play with a friend –  The online and offline c0-op gameplay for a handful of people is a great feature.  While playing single player the game can get monotonous.  But when played over Xbox Live or via splitscreen the game becomes an instant and constant joy.

Hideous alien creatures – Serious Sam has some serious and hideously attractive creatures.  Throughout the game players chased, bombarded, and attacked by some of the most unique and grotesque enemies this side of a horror flick.  The enemies players encounter really stand out amongst other first-person shooters.

Trying so hard to stay alive – The amount of enemies players will encounter throughout the game at times gets ridiculous — so ridiculous that it’s awesome.  One minute players are running through an empty forest, the next they’re literally fighting for their lives.  The survival mode is a great example of this. 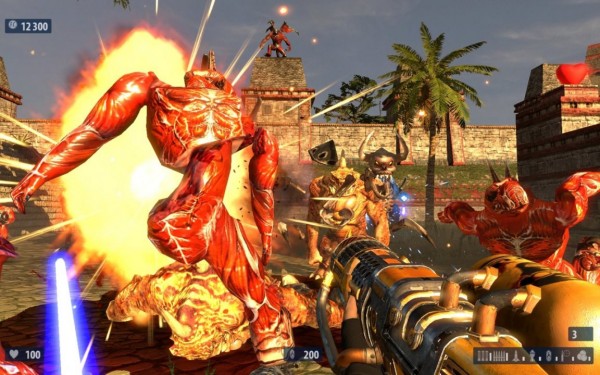 Black sky of doom  – Occasionally, the game has some graphical glitches – like the sky flickering back and forth between blue with clouds to just straight black.  While bugs exist in any game this really stands out, and should have been fixed.

Boring menus – Every game needs to make a good first impression.  The menu needs to be appealing and visually attractive.  Serious Sam’s menus leave a bad taste in one’s mouth.  Thank goodness the rest of the game is stronger visually.

Organization is key – I started off this game with a good wholesome single player campaign venture.  And all I can say is if you don’t like to read, this story isn’t for you.  They could have incorporated some audio dialog in place of the chapter-long briefing before each level. 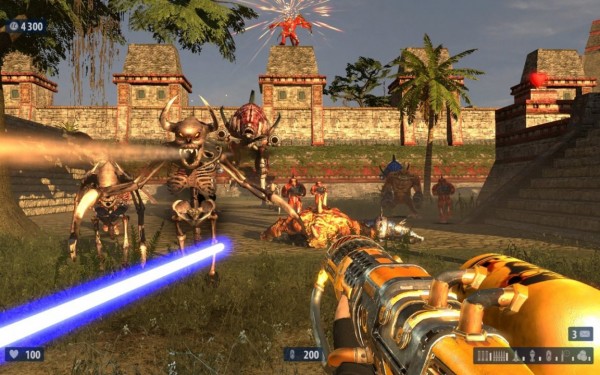 Serious Sam HD: The Second Encounter like its prequel The First Encounter is all about action.  The game has it in droves, and it’s an absolute blast to run and gun against overwhelming odds.  Still, the game’s creatures can occasionally be a bit horror-movie disturbing, so those with weaker stomachs may want to steer clear.