Simple but fun – This game is definitely not as complex as Puzzle Quest. Though the game has a linear story and is divided in different acts that form a collection of ‘dungeons’, each dungeon is filled with different puzzles and a small adventure in itself.

Variety of mini puzzles – you can perform different actions such as looking for treasure, leveling your character or unlocking dungeons by playing small puzzle games. They offer some refreshing puzzle styles to the classic ‘match the color’ template that take you away from the basic puzzle fighting mechanic.

Picking out loot – Though a bit confusing at the start, Puzzle Chronicles starts to drop a full load of cool loot on your character once he’s started leveling up a bit. Figuring out different combinations and what suits my play style best really reminded me of my classic RPG times. The game even displays fun items such as wolf heads on your character during gameplay.

(Maybe a bit too) Great for the kids – The game’s interface is far easier than Puzzle Quest with an entertaining and cartoony narrated storyline that makes it perfect for, but necessarily restricted to, younger gamers.

Full narrated story – Though the animations that are used to tell the main character’s story are a bit static, the fact that they’re fully narrated is a enriches the cartoony style and production value of the game significantly. 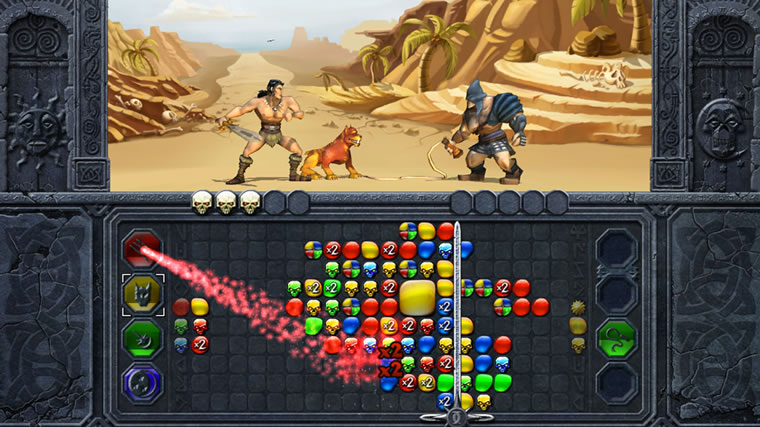 Loading. . . – The biggest disappointment were the huge amounts of loading screens that kind of drive you mad after a while. Simply moving back and forth from the inventory screen to the area map already requires a couple of seconds and even resets the game’s music every time, making it even more annoying.

Puzzle Chronicles is a great game for people who haven’t yet discovered the magic of Puzzle RPGs yet and want to start out easy with the genre. You can clearly see that the game suffers by comparison to more established puzzle titles and might have tried a bit too hard to distinguish itself, but that doesn’t take away that it’s a delightful little puzzle game.