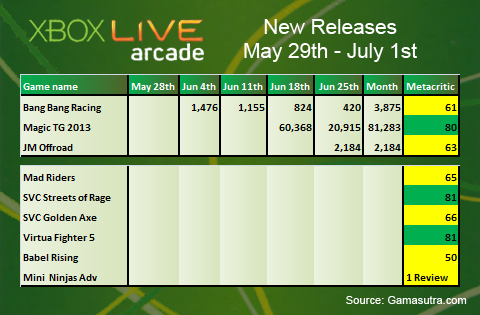 Our friends at Gamasutra have published their monthly XBLA sales analysis for June 2012. June was a tricky month to track; the lack of leaderboards in most games made tracking sales difficult. Out of the figures that could be found, Magic: The Gathering Duels of the Planeswalkers 2013 was the clear winner with over 80k downloads. Racing games were abundant last month, but their sales were lackluster. Bang Bang Racing and Jeremy McGrath’s Offroad only sold 3k and 2k, respectively. Although the other six games don’t have sales figures, it is known that the Streets of Rage collection was the 15th overall XBLA game on its second week of release, which was also the week Virtua Fighter 5 won fourth place. If nothing, the month was great for reviews; June had plenty of releases, yet no game received a dangerously low Metacritic score.