Two words strike fear into even the most jaded twenty-something: student loans. All that education and all that partying came with a price that makes its presence truly known just as they feel life is starting out. Thus begins the cycle of making money to exist and still pay off that loan sometime before we cross that rainbow bridge to eternity. As gloomy as all this sounds, Ugly Beard Games has found a way to make it somewhat more palatable by wrapping it in a top-down shmup, Void Vikings.

After choosing a starship and its equipment, your task is to earn enough money to pay back the debt incurred in the ship’s purchase. Plus accumulated interest. You earn your keep by eliminating enemy ships and scavenging their parts, then using those parts to either outfit your vessel or sell for cash. When the debt is paid off, you can see how long your ship survives against an endless assault of hostile spacecraft.

Choose your … major? – Many shoot-em-ups grant you the option of choosing your ship, and Void Vikings is no exception to this. However, your decision will be based on what “major” you choose to study. This is the game’s way of letting you mod your ship for your particular playstyle. You must choose a major and a minor, then you have the option to add up to four electives for additional buffs. While this sounds very helpful, keep in mind that your debt increases with each choice. When you’re ready, you choose a starting system based on its difficulty and, of all things, interest rate. You see, with each new level you start, you’re charged interest on the remaining debt. If you’re now having flashbacks to your freshman term at college … you’re welcome.

Simple controls – Void Vikings’ controls are very similar to another top-down shooter on Xbox One, Dogos, and are just as effective. The left stick moves the ship, while the right stick changes the direction in which it’s pointing, allowing you to “drift” around enemies, in a sense. Your primary, unlimited-ammo weapon is mapped to the Right Trigger, while Left Trigger fires more limited but more powerful ordnance, such as a homing missile or a rail-gun projectile. Meanwhile, your ship’s emergency equipment is available on the bumpers – Right Bumper for offensive use, Left Bumper for defensive use. Limited-use features have cooldowns that can vary based on the type of equipment you install on your ship, and are illustrated on the right edge of the screen for at-a-glance viewing.

Clever replayability – Okay, so you’ve successfully made enough cash to pay off the debt. Now what do you do? Is the game just over and ready to be started again? Well, yes and no. Most players will go ahead and enter the game’s score attack mode, but you can also bypass it and return to the title screen. If you do, your ship is saved for later use. While you can’t start a new standard game with an old ship, you can go straight to this mode with any completed ship. If a given ship isn’t working for you, you can delete it.

Amusing mash-up – So the merger of economics and shoot-em-up tropes does, after some thought, make some sense. Fortunately, Ugly Beard Games isn’t done with us, since they toss Norse mythology into the mix. Your starter ships are named for Odin and Freya, and the other unlockable ships share similar names. The various weapons and parts you come across also borrow from Norse culture. Fittingly, the game’s score-based mode is named Valhalla, where you can relive battle after glorious battle by surviving as long as you can with your fully-upgraded (and paid off) ship.

Looks dated – When I first launched the game, I was struck by its copyright date, 2015. But, this game was just released in January 2019 on Xbox One, right? It would appear there have been no changes to this port that would have necessitated any update to that date. As it stands, the graphics are effective, even though the blackness of space washes out the ships except for their colored lights. Similarly, the sound effects are good, but the soundtrack is barely audible, even when the sound settings max everything out. A little music to frag opponents by is always kinda nice, but there is something to be said for “silent but deadly”, too.

Grindy – In order to unlock additional starter ships, you need to work toward improving your current newest ship. For example, to unlock the third ship, Skadi, you MUST use the Freya in Valhalla and reach a certain minimum score. After you unlock it, you can only use Skadi to earn the minimum score needed to unlock the next ship, and so forth. But what if you have an extra powerful Odin or Freya ship and find the Skadi not to your liking? Tough. Hopefully you can use those faves to unlock the numerous grinding achievements in the game, instead.

When Void Vikings is taken at face value, the student loan references make sense, but Ugly Beard could have easily changed up the terms and it wouldn’t have affected the game one bit. What you have here is a good and reasonably-priced top-down shooter where a full match can be played in about an hour, including a trip to Valhalla if desired. It also wraps it in a good lesson in economics, complete with the virtual euphoria of seeing that loan balance drop at a faster rate than the interest being charged. There’s no new ground broken here, but I’d like to think the developers didn’t have that as one of their goals for the game. Instead, you get to blast alien invaders and soul-crushing debt into oblivion, and do so for less than the cost of a fast-food lunch.

Void Vikings was developed and published by Ugly Beard Games, LLC. It was released on January 11, 2019 for $4.99. The author used their personal copy of the game for the purpose of this review. 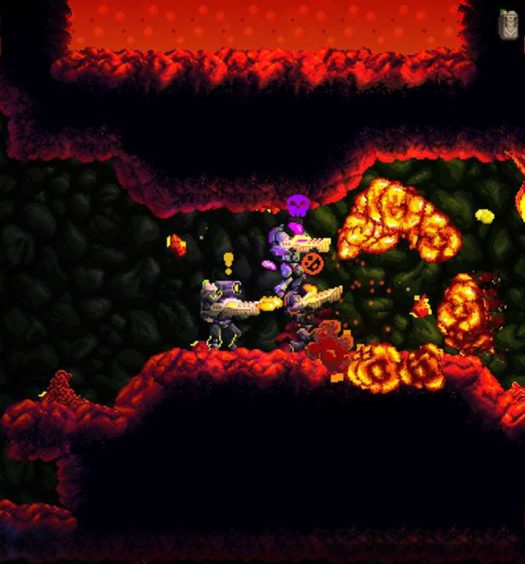