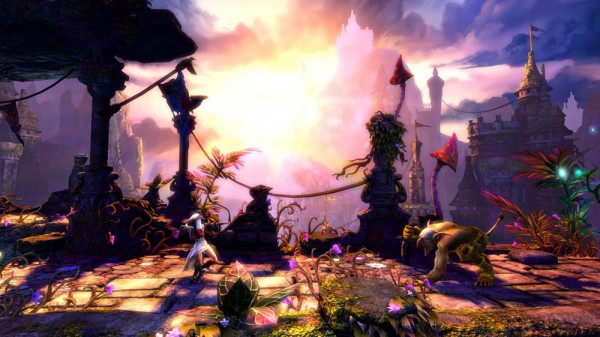 The eye candy – When you sit down to play Trine 2, there’s one thing that we can guarantee you’ll notice; the jaw dropping visuals. It’s clear that Frozenbyte poured their heart and soul into making sure Trine 2 is one of the best looking games on Xbox Live Arcade. From mystical forests, to caves filled with pink mist and giant mushrooms, to Gothic castles all of Trine 2‘s backdrops will have your head spinning at just how pretty this game is. Saying Trine 2 is one of the best looking games on XBLA isn’t enough. Its one of the best looking side-scrollers on the entire console, period. From start to finish, Trine 2 provides players with plenty sights to behold.

Intriguing world – The world that our heroes populate, and we as players are dropped into is what really makes all of those polygons come together so beautifully. What Frozenbyte has created is a mystical world that’s just plain lovely to look at and entertaining to be part of. When you encounter frogs and snails literally twenty times your size, you can’t help but feel like you’re exploring a wonderful childhood dream. All the graphical polish in the world wouldn’t really be worth much if what you’re looking at isn’t particularly interesting would it? Luckily for Trine 2, the world is interesting. The game’s visuals and the developers’ artistic vision mesh perfectly and create something that bides the player to enter and be part of.

Physics – While we’ll touch on the game’s physics and how they affect the gameplay later, there’s no denying that Trine 2‘s physics are impressive as a stand alone element of the game. The first time you conjure a box and attempt to ride on it on top of a huge bubble, you’ll crack a smile. When you’re surfing on a plank of wood suspended on a stream of air blowing upward, you’ll find yourself counting how long you can balance for. Examples such as these are only the tip of the iceberg. Everything from the arch of Zora’s arrows, to deflecting projectiles with Pontius’ shield involves subtle attention to detail and an understanding of physics on the part of the team at Frozenbyte. Conceptually, Trine 2‘s physics are very impressive and are an integral part of every aspect of the game. Lack of clarity – One easily addressable weakness that Trine 2 has comes from a lack of clarity, hints, and/or tutorials. There are important aspects of the gameplay that go completely unexplained. For example, we didn’t really figure out how to properly conjure boxes or planks until almost half way through the game. All because it isn’t ever really made clear how to do so. Until we nailed it down, the game could get extremely frustrating given that creating objects and manipulating them is basically what the game is about. There are certain tactics that go without being mentioned whatsoever. Once you figure out how to perform one particular feat you’ll be able to solve almost any of the game’s puzzles utilizing it. Not explaining it to players may have been done on purpose to force players to think harder. Regardless, failing to arm the player with the knowledge needed to attack the game’s enigmatic puzzles is a glaring flaw. One that could be easily remedied with some in-game tutorials and narration, saving players buckets of frustration. As it stands however, the game is thin on training, hints and tutorials and its because of this that Trine 2 can be rather irritating at times.

Combat issues – At its core, Trine 2 is essentially a physics based puzzle game. Pontius stands out as the game’s one true warrior class that excels in combat. He can wield several different tools of destruction which you’ll come to rely on when you face enemies in battle. The first combat related problem is that actual combat scenarios are pretty few and far between. Throughout each level you’ll occasionally have to switch to Pontius and hack and slash a few goblins, spiders or man devouring plants. But that’s it. Most battles are over in less than a minute (if not less) and you’ll be solving puzzles for another five or ten minutes before you come across some more enemies, quickly vanquish them, and move on to puzzles once again. To say that the game needs more combat makes us sound like we’re a bunch of Mountain Dew sipping teens with attention deficit disorder. But the reality is, the ratio of combat to puzzle solving in Trine 2 does indeed hamper the pacing of the game, and will therefore hinder many players’ enjoyment.

In addition to sparsity, the variety and lack of depth of Trine 2‘s combat are also issues. Whenever combat arises you essentially have one option; Switch to Pontius and cut them down to size. This is a game that’s all about switching between three characters and utilizing their abilities. So why then, is Amadeus essentially helpless when it comes to engaging the enemy? Why bother using Zora’s bow which you have to manually aim, take the time to charge up and then even sometimes arc to kill enemies? You can just switch to Pontius throw up your shield, jump around and slice each enemy a few times. This gets a bit repetitive and plays into the pacing problem we just mentioned. Giving each hero some sort of interesting offensive ability would have created more variety and helped keep combat interesting. Instead however, basic combat remains slanted in favor of Pontius throughout the game game and bogs down the draw of being able to approach everything three different ways. Because you really can’t. The one exclusion to this rule is the game’s boss battles which are mostly enjoyable and inventive and do usually involve the utilization of all three characters.

Convoluted co-op – If there’s one feature that’s become standard with this generation of consoles, it’s co-op. Chances are you can think of several games that lack the feature, that you wish had it. Trine 2‘s co-op however, left us scratching our heads and squeezing our controllers in frustration. All of the game’s puzzles are designed to be solvable by one player. Utilizing all three characters different abilities, all of the game’s puzzles can be solved by one set of hands and eyes. Why then, would you want to get online with two people and chance someone else manipulating the object you’re balancing on, sending you to your death? Took the time move the portals into place, conjure a stack of objects to get on a bubble, and ride it upward to get where you need to go? All of it comes crashing down when someone moves a portal, shoots an arrow out of boredom, or swings their fire sword while idly standing by waiting for someone else to solve the puzzle so the group can move forward. Some of the games puzzles are fairly advanced requiring a lot of concentration, skill, determination and sometimes trial and error. When you introduce two more players into the equation who can bring everything crashing down, things tend to get a bit messy. Murphy’s Law exists for a reason. Unless you have friends who own the game, and share your level of patience, it might be wiser to just skip over Trine 2‘s co-op. The sum of Trine 2‘s parts is a game that’s going to impress some and fail to capture the interest of others. The game’s charming world, gorgeous visuals and impressive physics based gameplay give it plenty to stand up on. It’s failure to show players “how to play” and questionable combat however, may cause the game to fall flat on its face in the eyes of others. If you’re someone who absolutely loves puzzle games, and other conundrum packed adventures like Portal, you will likely find yourself falling in love with the game’s witty design and charm. On the other hand, if you’re someone looking for an action packed romp or a traditional platformer, you may want to steer clear of Trine 2 despite it’s glorious high-definition paint job. In the end, Trine 2‘s going to draw praise from some, and disappoint others. Want a sure fire way to find out which crowd you belong to? Download the Trine 2 trial today and give the game a try before diving in for yourself.