Toy Soldiers: Cold War is a great game. We loved it when it first released and since its August 2011 release, the possibility of DLC has been a roller coaster ride to say the least. Now the Napalm and Evil Empire additions have finally released and unfortunately it might not have been worth the wait. A few fun additions were made but a severe lack of content makes these addons a bit of a let down.

More of the same – The Napalm and Evil Empire additions don’t try to reinvent the wheel and it’s much appreciated. Each campaign contains three new levels with the same Toy Soldiers formula you have come to love with a few new additions. Golden collectibles, awesome vehicles, destructible environments and tons of enemy waves make you feel right at home from the very start of each campaign. Each level may be a bit more difficult than you remember but at only three levels per add-on, the option to slowly ramp up in difficulty is obviously not an option. So bring your A-game, you’re going to need it.

New side of the battle – The Evil Empire campaign will put you on the other side of the battle. You will now be controlling the Soviet Army with the Americans coming right at you. For the most part, nothing really changes as far as how the game plays but a few things like “Ivan” instead of “Commando” or the control of some of the weapons might stand out at first. This really doesn’t hold you back but instead just adds a new look and feel to something that may have become stagnant for some players. 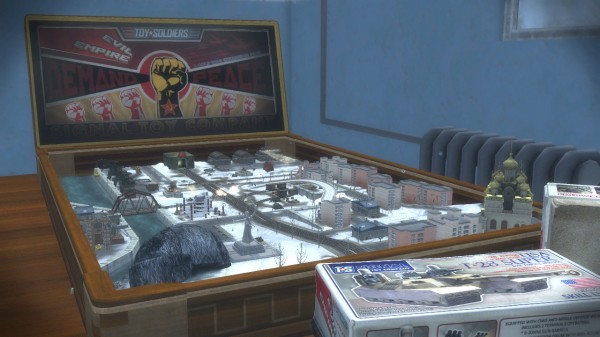 New weapons – By far the coolest additions included in these addons are the Orbital Laser barrage and the Lazer Tank vehicle. Both could be considered game breakers but they just feel damn powerful and fun to use that you‘ll tend not to care how easy they make it to win. The Orbital Laser is a death strike from above that the player can control and it will last for an unbelievable amount of time. This thing can clear a tank in a second or two and a wave of 40+ soldiers in another second. Then you have beast that is known as the Lazer Tank. This vehicle can take a ton of damage while dealing out even more. The downside would be the fact that the laser is the only weapon on the tank but it reloads very quickly and each hit that lands does more damage over time making this the most powerful weapon we have seen in a Toy Soldiers game to date. Both are extremely powerful and capable of creating huge momentum shifts.

Where’s the beef? – The Napalm and Evil Empire campaigns are incredibly short. Each add-on will only take about one hour to run through. The collectibles are all fairly easy to find and the only replay ability would be left in your desire to earn platinum medals or complete the decoration challenges which really don’t add any value to the game other than offer challenges that force you to rethink the way you approach each level. If both of these packs were combined in the same add-on for a total price of 400 MSP, this would be a easier pill to swallow. But as it stands right now, there is not much bang for your buck here.

Useless additions – The content that is included in each add-on is content that most players would find fairly useless. Does anyone ever play this game online to the point where new multiplayer maps were necessary? Does anyone really play survival mode? And even though the mini-games are generally fun for the first five attempts or so, the enjoyment wears off very quickly as it does with any mini-game that usually lasts about one minute per play. As opposed to these additions, a few extra campaign missions added to each add-on would have likely been a much more welcomed addition. The mini-games, survival maps and multiplayer maps are things you might check out once or twice but then quickly forget about once you start the new campaigns. Since this is an add-on to an already existing game, the option to give these addons a “Try It” is not available. To be honest, a score of a “Try It” would be the score these addons would have received if that was an option. But considering the amount of content that’s actually useful and fun, it’s just not worth the price in most instances. If there’s ever a price cut and these go on sale for around 160-200 MSP each, then be sure to pick them up. If you happen to be a hard core Toy Soldiers fan, then be sure to pick these up as they do stay true to the core game you have come to love. But if you are an average gamer without any strong feelings about the franchise then you really don’t need to check out these addons. The content simply does not match the price.