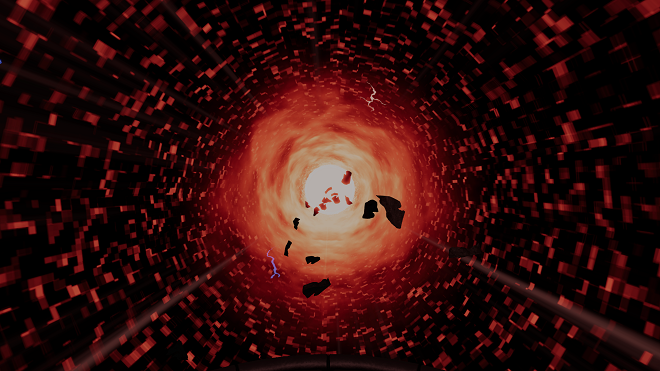 When a science-fiction plot delves in time travel, the characters generally emphasize their efforts to not do anything that might alter the course of history. One such work is “A Sound of Thunder”, a Ray Bradbury short story where hunters pay for the privilege of going back in time and hunting a dinosaur. In the story, the efforts undertaken – walking on an elevated path and hunting a dinosaur minutes before it would die naturally – are still not enough to prevent a very subtle mistake from affecting current events. I would surmise that Wales Interactive partially considered this while developing their new first-person shooter, Time Carnage, before throwing out all the “butterfly effect” stuff and going for body count.

In Time Carnage, the player is sent to various points of the past and future with an army’s worth of weapons at their disposal and one simple directive – kill or be killed. While your armaments are relatively unlimited, your movement is not. You can move only within a small shielded “time platform”, with enemies descending upon you from multiple directions. Good controls – At its core, Time Carnage is a first-person shooter, so the controls will be pretty familiar. Left stick will move your character around, while the right stick will aim your weapons. As you will be dual-wielding, the triggers will fire whatever weapon you have in that particular hand. Tapping the bumpers will switch between the weapons available to that hand, while holding the bumper will return it to its pedestal for reloading without getting the alternate weapon. Control response is excellent, and the weapon swap mechanic is very welcome.

Plenty of game modes – There are three ways to play, and each adds something to the overall package. Campaign is the primary mode and will get the bulk of the player’s initial attention. Completing a campaign level unlocks a new weapon and/or a new level in the Challenge mode for the player to attempt. Challenges have players rack up as many kills as possible using a specialized rule set. Completing challenges awards special perks that can then be used in the Arcade mode, where you can choose your location and enemy set, or let the game randomize where it sends you and what it sends your way. Perks may handicap you, provide support buffs or just do weird stuff, like neutralizing gravity on targets you’ve eliminated.

Fair gameplay – For the most part, everything in Time Carnage is stacked in your favor. Your weapons reload on their pedestals at a reasonable rate while they are not in use. Likewise, your health and shields will slowly recharge when you aren’t being directly attacked, including during the delay between waves, giving players a brief pause before the next onslaught. Lastly, your enemies will only attack within a limited arc (maybe 180-210 degrees) around the time platform. You are far from invincible, and you will be challenged even on normal difficulty, but the game is helping you out as much as it can without too much hand-holding.

Nice details – I enjoy when developers look at the big picture while also paying attention to those who admire the trees, along with the forest as a whole. For example, the sniper rifles do offer a limited scope feature. While you cannot aim-down-sights in the game, you actually see that the scope is rendering a close-up image of where the gun is targeting, which can help you in certain instances. Similarly, I like it when a game doesn’t take itself too seriously, such as the very satisfying “cha-ching” sound when you score a headshot on your target. Stand or fall – I get the concept of hemming a player into a single small area and letting them battle it out, but if the intention is to turn the player into a stationary gun turret, then perhaps it would have been better to have single stick control, using the left or right stick to simply aim the reticle and not have any strafing movement at all. While the controls are good (if not a bit quick; thank goodness for the sensitivity slider in the options), I think a bit of simplification would be in order.

“The dank, Moe … the dank!” – The graphics in the game are more than adequate and, as noted, have some nice touches. However, some levels are remarkably dark, which is all fine and good for the setting, until you factor in the equally dark color palette for the enemies. This makes them very hard to see until they’re whittling down your shields, or taking that last little bit of life you have. If you’re paying attention, you should see them in time, but when you’re being attacked by velociraptors to your left and zombies to the right, the pack of wild dogs sneaking up the middle may escape your notice.

Suspension of disbelief – As I said earlier, a game that knows when to poke fun at itself is a good one, but even that has its limits. The time-travel motif doesn’t bother me, and I really like the dual wield mechanic. Where things go from silly to “silly” is when the weapons you unlock look completely impractical for dual-wielding. Exhibit A? The aforementioned sniper rifle.

(A quick sidebar before I get to my score for the game: I don’t know about you, but I still have my Kinect sensor connected to my Xbox One console. The device has its merits, and I do wish other developers had taken to it and continued to work with it, even though it has now been discontinued. This type of game strikes me as one that could use a Kinect upgrade, especially with the improved sensitivity of the Xbox One version of the sensor. At the minimum, it would be a different and more immersive way to play.) The best analogue I can come up with for this game is the arcade first-person light-gun shooter, like The House of the Dead or Time Crisis. When taken in that context, Time Carnage makes a lot of sense. It’s playable in small bites, it’s pretty good fun and it offers multiple ways to play. The asking price is just right, and low-risk/high-reward combinations are a winner in my eyes. The complaints I do have should not keep genre fans away from this time-hopping adventure, so leave the DeLorean in the garage and start up your Xbox One instead.

Time Carnage was developed and published by Wales Interactive. It was released on September 12, 2018, for $12.49. The author was provided a review copy of the game.