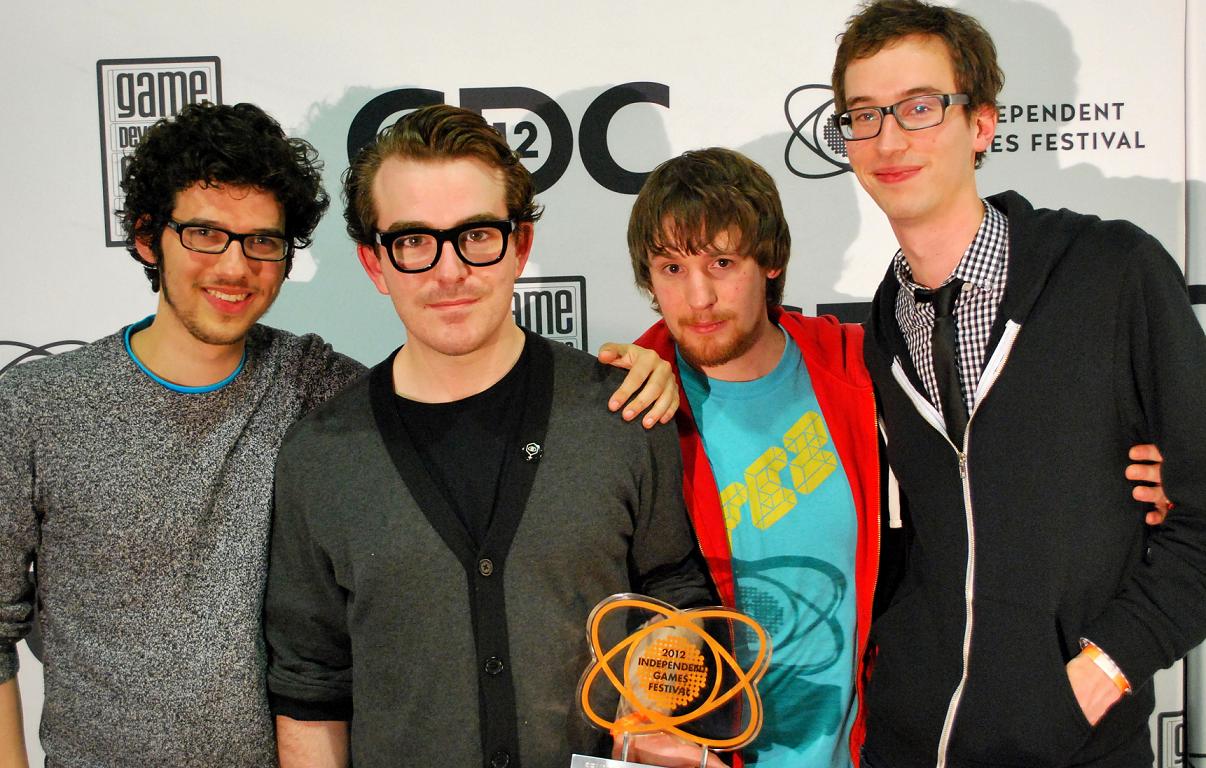 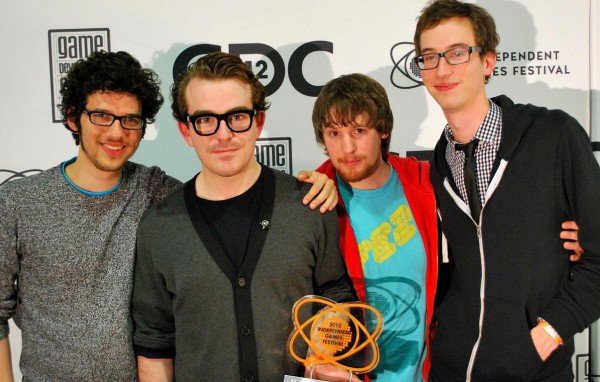 Having been in development for over five years, Fez is a indie/special/something game that has embodied many of the personal challenges its creators have faced, not making the endless development of it seem any shorter. The attendees of the yearly Independent Game Festival Awards at the Game Developers Conference in San Francisco were witness to the emotional release of Fez creator Phil Fish and his colleagues when they accepted the Seamus McNally Grand Prize and $30.000 dollars in prize money last month. Fish, a personal indie hero of mine, is currently starring in the renowned and Sundance award winning documentary Indie Game: The Movie, where he is followed through-out trials and tribulations of finishing Fez. His team’s journey up until receiving this award, touched me in a very personal way. 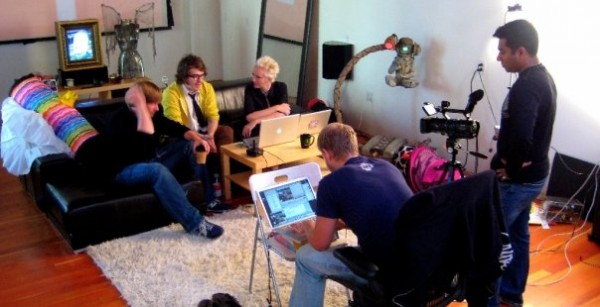 It was March 2009, my first ever GDC conference that I attended as media. The tables were turned on me when I was asked last-minute to be interviewed by BoingBoing.net’s Offworld game blog on my participation of the first ever Global Game Jam. An event which I had attended in the Netherlands a month earlier. Our team’s game, Pulse, not only won the popularity vote at our jam site, but also was offered a publishing deal by a Dutch game developer. A game developed in less than 48 hours by a rag-tag team of students getting an offer like that, was not something even the organizers of the Global Game Jam had foreseen.

So here I was: sitting on a comfortable couch in a San Francisco loft, showing my game to this indie developer called Phil Fish. I had seen Fish talk at the Indie Game Summit just a couple of hours before, where he attracted a lot of love from his equally indie audience having built a strong reputation with his work on Fez, and by employing his immaculate charm. Fish had won the Excellence in Art award during last year’s IGF awards, only to disappear off the radar after I had met him in 2009.

I had added Fish on Facebook and was hoping to hear more from him, but instead only saw a glimpse of him in the past four years – both during the following GDC conferences in San Francisco – and suddenly lost contact with him on Facebook in 2010 when he deleted his profile. Fez was not getting anywhere close to being finished and there were rumors Fish was facing tough times in his personal life. 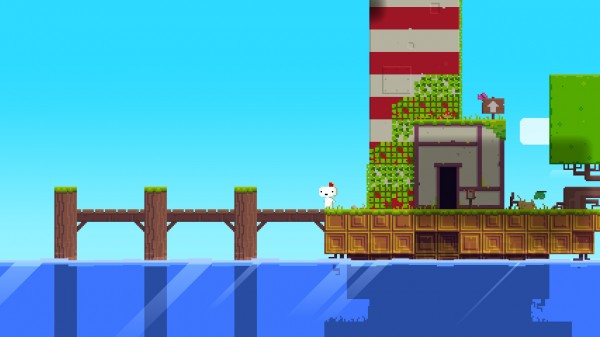 Fast forward to March 7th, 2012: the night of the IGF Awards at GDC 2012. After nine months of absence I made my personal comeback in the game industry during this year’s GDC, having faced my own personal trials and tribulations last year. And there he was, standing in tears on the stage during the IGF awards. Fish and his team had won the Seamus McNally award for Best Independent Game and the $30,000 grand prize. I had to speak with him, which I subsequently did in the interview area backstage.

It’s important to remember that Fez is not just the story of one man, but one of four friends. As the Polytron team all sit down with me, the stories begin to flow. Fish is the main guy with the vision for Fez, but his close friend and colleague Renaud Bedard brought that vision to life as the game’s only programmer.

“I don’t see that much of myself in the game,” Bedard says. “Because Phil is the designer and I totally respected his vision all through and I feel like had a much better view of the entire. I just basically implemented his ideas the best as I could.”

“You just basically made everything happen,” Fish adds standing next to him. Bedard continues his story. “So what I see are the years I spent making it,” he says. “I see like every little thing from two or three years ago that I believe I should’ve fixed at some point, but nobody sees it because it’s been such a long run. You might think it’s been five years, but it’s been over five years. The start of the game is still as crappy as it ever was, but even if you revisited it, it won’t be redone. We were just two people making the game back then, so obviously some parts of the game will be less perfect to our eyes. But everyone else sees it for what it is in its entirety and appreciates it, which is great.”

Bedard and Fish’s common friend, Brandon McCartin, followed the duo ever since they started work on Fez. McCartin joined the two at the award ceremony when Fez had won its first award at GDC 2008 and still remembers Phil’s troubles.

“Halfway through, Phil stayed with me and my wife overwinter when he was melting down a bit and we were nursing him back to health.” McCartin’s involvement in Fez grew gradually, with him filling up the gaps in development and eventually taking up the role of audio designer on the project. “Everyone thought it would be out months from then instead of years, but it sort of naturally evolved. Renaud has kind of been my liaison on the project, because he’s the only one who can hook in my work into the game. Phil is obviously the artist and the mad scientist who basically destroyed himself to make this, but Renaud is the sober Ying to Phil’s raging Yang that made it possible.”

Rich Vreeland, freelance composer and audio designer, was the last team member to join the project to produce the complete soundtrack for Fez. Fish, Bedard and McCartin were all big fans of his performances as a chip tunes artist under the alias ‘Disasterpeace’

“I played a concert in Montreal and Renaud came up to me and asked if I wanted to write a track for Fez,” Vreeland recalls. “I told him I wanted to write all the music for Fez, because I had followed the project for a few years and was intrigued by it. I wanted to be a part of it and thought I could help make it good. So the first thing I did after I went home, I made a track based on the inspiration of what I knew about the game.”

“I really wanted to go to that show, but couldn’t,” Fish adds. “Every time Rich plays a show I can’t go to it. I even missed him last night! But Renauld e-mailed me from the party itself and told me Rich was into Fez. Ok, cool, but I wasn’t really familiar with his work. I started listening to his tracks on Bandcamp and noticed this could totally work. The next day, he sent us a track he wrote that night and it’s still in the game. I was in shock. At that point the game was in development for three and a half years and we didn’t have any music. But I always knew exactly what I wanted and had a very specific mood that I wanted. And Rich just nailed it right away. He would come up with all sorts of ideas, like generative cyclical music that never sounds the same in a million years. Like yeah, let’s do that!” 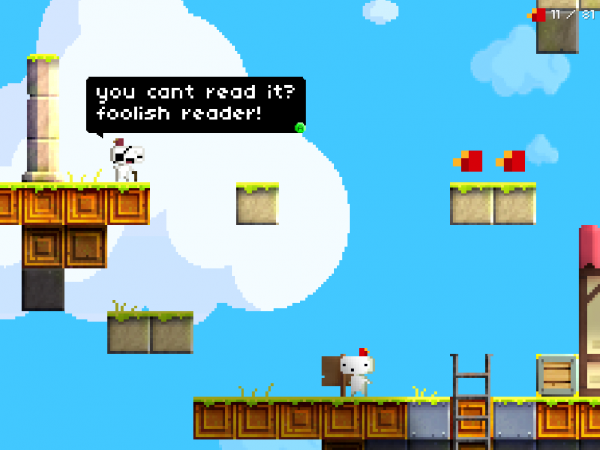 Eventually I got to speak Fish himself, for the first time in two years no less. “I survived because of my love for this game,” Fish says. “I’m really glad of what we achieved and the state it’s in today is pretty much exactly what I’ve always wanted to be. Sure it reminds me of all the bullshit I have had to go through, but now that it’s finished, it’s starting to produce some rewards and it’s not all bad. I’m trying to focus on the good. It’s always cyclical. Making videogames is super hard and we had a lot of things go wrong in the development. At some point you’re so deep into it. It becomes this big important thing, everyone’s expecting it and your whole life depends on it. I lost my girlfriend, my parents divorced, we lost our funding, I had to divorce my business associate and it was a nasty legal battle. All these things happened one after the other and there were definitely periods of time that I wanted to give up completely. I was just going to get a normal job somewhere and this whole dream was going to die. But it becomes so important, that there’s no way to let it go. You just got to keep your head down and just do it.”

If it hasn’t been highly recommended to you yet, you will hopefully be enticed to find out more and even go see Indie Game: The Movie, featuring Fish’s struggle and hardships in getting Fez finished. “If I can say, I’m very proud for me and everybody else for having stuck with it the whole time. I think it’s kind of a miracle that it happened at all considering everything. In all likeliness this game should’ve never been finished.”

Talking to Fish and his team was one of the more emotional interviews I had done in my career. We were all pretty much sobbing halfway through after sharing some similar personal experiences and tribulations. After everything that has happened with Fez in the past few years, a victory like the one they had experienced that night at the IGF Awards can touch upon the deepest emotions a game developer can feel who has experienced what Fish, Bedard, McCartin and Vreeland have gone through together. Because of that, the story of Fez and more importantly of its development team has been able to touch many others and me in a deep and personal way.

Fez therefore isn’t just a masterpiece of programming, sound and design, but also one that is brought forth by a group of individuals who have each had to struggle with their personal trials and tribulations during the development of their game. This turns Fez into a game of which its development story is almost mandatory to explore by watching Indie Game: The Movie, even before diving into the actual game experience.

For some fortunate souls this has been possible, either by attending the Sundance Film Festival or grabbing one of the showings during the GDC Conference. Rest assured, since creators James Swirsky and Lisanne Pajot have planned a nationwide tour to show the movie, you will almost certainly be able to watch it. The story of Fish and Fez, together with that of several other indie developers struggling to get their games done, is one worth watching. One spoiler about their stories is obvious. As many other indie game developers out there, their creations are deeply connected to their personal challenges in work and life. This makes indie games more of a mirror, if not a magnifying glass, into the life experience and imagination of their creators. Something that not only distinguishes indie games from their AAA counterparts, but also makes them very much worth exploring on a large scale.

Polytron recently announced that Fez will be released on the Xbox Live Arcade market this week on Friday the 13th of April.