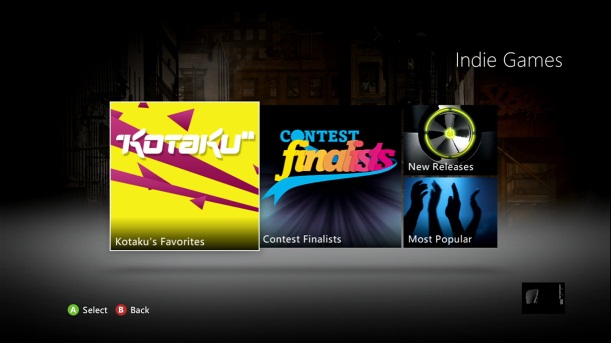 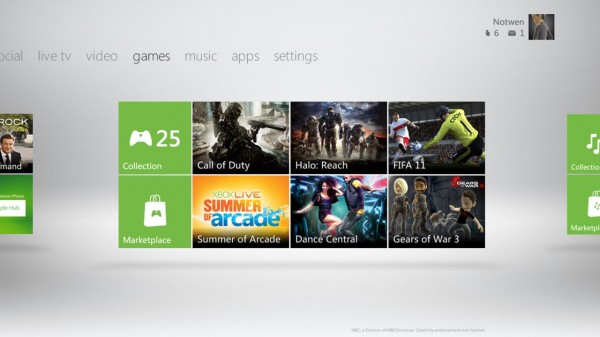 Let’s start with the bad news. Just like with the old dashboard, indie games suffer from a lack of visibility. Despite the claims of Major Nelson’s (admittedly extremely informational) introduction to the new Games Marketplace, the nicely revamped New Releases and Most Popular lists do not have “all” games, as indie games are mysteriously missing. In order to find the indie games, you’ll have to go to the games tab, head to the Marketplace, click on Games, click on Game Type, and then, at last, click on Indie Games. It took us a while to track this navigation down, as it wasn’t readily apparent until watching the Marketplace intro video.

Unfortunately, finding the indie games is the easy part. Instead of having any logical way to filter through the games, you just get a huge, 2200-ish title list of every single indie game ever released, which you can sort by title, highest selling, user rating, and release date. There’s not even a way to look at all of the games by Title A-Z (where you can pull up all games that begin with a certain letter), though you can still do this for both games on demand and XBLA games. Want to search for a list of great RPGs like you could on the old dashboard? Too bad. The ability to search indie games by genre has also disappeared, though it was left in for all other Marketplace content.

There’s a silver lining for every cloud, however, so let’s move on to the good. In a post aimed at indie developers, MSDN blogs does a great job of laying out some of the dashboard features that do actually lend a hand to the typically forgotten indie market. First off, ratings. It’s now incredibly easy to rate games. Some of you might be scratching your heads at this one. The real takeaway here is that it’s something indie developers and fans have been clamoring for, and Microsoft actually did it. It shows that they are willing to listen now and then. Plus, making games easier to rate has the potential to improve the Top Rated list for potential buyers, which is never a bad thing. 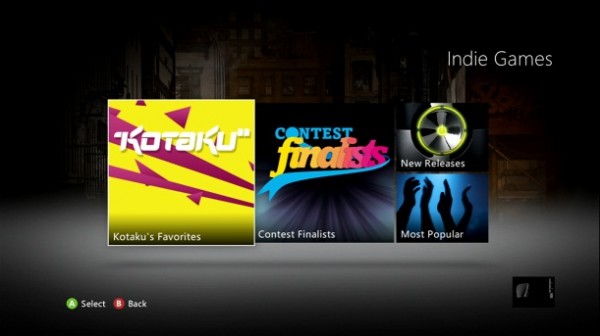 You also may have noticed indie games reppin’ on one of the rotating banners in the Marketplace. While clicking this link only shows a small subset of the games that are out there, it’s the first real regular exposure that indie games on Xbox have had to the masses. As PR folk say, any news is good news, so even this helps.

There are also two areas that the MSDN blog discusses that could go either way. The first is recommendations. Recommendations appear on a tab for every single game on the Marketplace, indie or not. Unfortunately, it doesn’t seem to be too accurate. Judging from some random spot-checking, Call of Duty and Halo are very similar to many indie games, and are therefore recommended purchases. One would hope that the recommendations improve a bit over time, but for now it’s a tad hit or miss. The other iffy area is Bing search. Since many indie games have somewhat interesting titles, the Bing search seems to have a somewhat interesting time finding them. If you have a Kinect, stop what you’re doing, turn on your Xbox, and say “Xbox – Bing: I made a game with zombies”. It won’t find the hit indie title I MAED A GAM3 W1TH ZOMBIES 1N IT!!!1, but gosh darn will it ever try (with hilarious results). On the other hand, if you’re looking for something like Blocks That Matter, Bing will pop it right out for you. 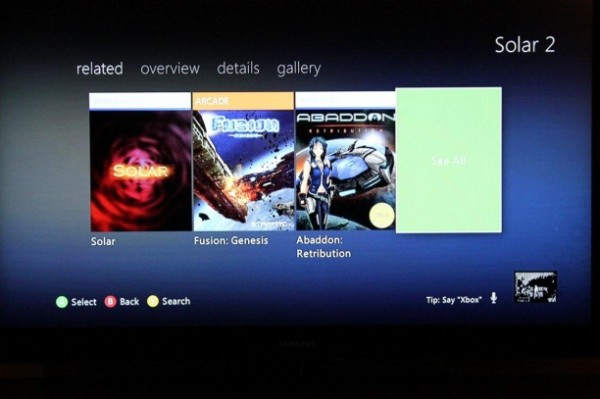 So there you have it. On one hand, searching for indie games is just as bad as ever, and in some ways even worse. On the other, some indie games are getting greater exposure and Microsoft has worked to start integrating indie games into at least parts of the new dashboard. Forums are filled with developers arguing for both sides, so we can’t even turn to those guys for an answer. Some developers have used the time that others have spent talking and created hilarious games poking fun at the new dashboard. No matter which way you lean, it is hard to disagree with the fact that the Xbox Live Indie Games market has become a valuable part of the Xbox Live community. And despite some growing pains, we can only wish it continued success and ever-increasing relevance in the hearts and minds of gamers everywhere.