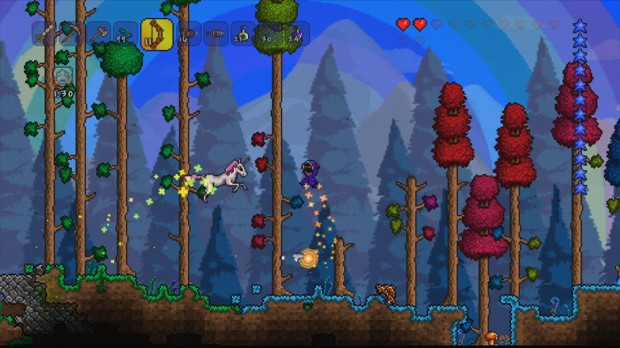 Welcome to the XBLA Fans Terraria Startup Guide. To begin with, we’ve had to make a few assumptions about what you’ve already managed to achieve within the world of Terraria. We’re going to help you build that first structure and do some crafting and exploring, but before you can do so you’ll need to create your own character (please refer to ‘choose the right difficulty level’ below when you do) and generate a world, then spend a little time familiarising yourself with the Terraria controls. Once you feel confident that you can move and jump around, dig holes, fight basic enemies etc, then feel free to read on!

Unlike Minecraft, Terraria does not feature a peaceful mode which is completely free of enemies. Instead, the difficulty level in Terraria is tied to each character and must be selected at character creation – be careful, once you have chosen a difficulty then there is no going back.

The available difficulty levels are:

Normal – when the player dies, he loses 50% of the coins he currently holds and will respawn.

Difficult – upon death, the player drops all items and coins he holds, but may return to the scene of death to recover them upon respawning.

Hardcore – when he dies, the player is killed permanently – dropping all items and money for other players to collect. The player remains in the game as a ghost until he logs out, at which point the character is deleted.

Once in your world, you’ll probably have spent a few minutes running around the immediate area to get used to things. Although Terraria features randomly generated worlds, there’s no doubt that you will see some trees nearby and chances are, there is lots of dirt beneath your feet.

In your inventory, you’ll see that characters begin with a copper axe, pick and sword. Equip the axe and cut down some trees, then collect the wood that falls from them. Repeat this until you have maybe two to three hundred wood in your inventory.

You won’t need it yet, but as you run around gathering wood, you will probably notice that just beneath the surface of the dirt are some different coloured blocks which shimmer from time to time. This will be copper, iron, silver, gold or a precious stone – more than likely copper when so near the surface. You can mine it with the pick now if you like, but best just to make a note of it for later and bear in mind that there will be much larger deposits deeper below the surface. 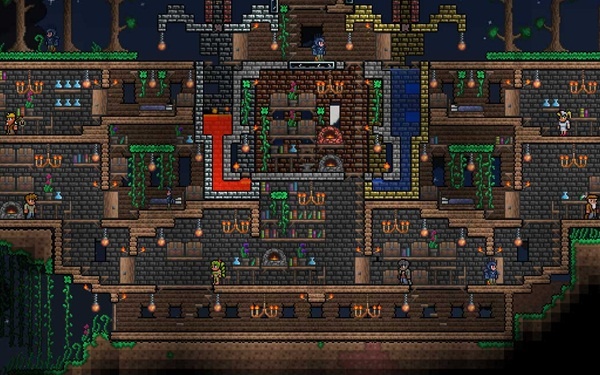 Although you want to be going nuts running around and having an adventure, the first thing you need to do is build a house before night falls. By now, you will have met some weak and easy to kill slimes,  but at night time, zombies and demon eyes come out in vast numbers and can pose a real threat.

To build a house, you really need at least a six block high, seven block wide structure as a minimum. Make sure you are on a flat area (fill in any gaps with soil) and begin to lay your wooden floor by selecting the wood from your inventory. Once you are at the appropriate width, build upwards until the total height (including the floor) is 6 six blocks. Now build the roof by placing a wood block to the side of the top wall piece and drag along to the other side. Making sure that you are inside, build the final wall and your house should look like a complete wooden rectangle. Now use the crafting menu to build a workbench and a chair, and then place them inside your house. Use the crafting menu when standing in front of the workbench and you will see new options are available – including doors and wooden walls. Build about one hundred wooden walls, the door and maybe about fifty torches If it’s getting dark you can place a torch anywhere at any time, but bear in mind that you will need to have at least one light source inside your house for the game to consider it ‘complete.’ Cut a hole three blocks high in one wall and place the door. Now see how you can look right through your house to the world outside? Well that means enemies can spawn inside too – use the wooden wall that you crafted to cover up every last square (including those behind the walls, roof and floor) and your house is complete!

Remember that the house will provide a safe haven for your character at night and also acts as a spawn point. Later in the game, you can move a large number of NPC’s into your house (for various benefits) and you can store your gear here or just generally make things look nice.

So you’ve made a house and a workbench, huh? Big deal! Terraria is all about the crafting and you’d be amazed at the range of things which can be made very early in the game. You’ll need to experiment by collecting various things and combining them at the different crafting stations (workbench, furnace, anvil, pot etc) but here are a few essential early combinations:

Wooden Sword – surprisingly, the wooden sword actually does more damage than the starting copper sword. It won’t actually do you much good, but for the price, and the fact that it can be made at the workbench for just a few wood, you should make one. Perhaps the most important thing is that it swings in an arc, which is much more effective than the starting shortsword.

Furnace – next up, it’s time to advance your tech tree to somewhere roughly equivalent to the Bronze Age, and the Iron Age, at the same time; whatever, you need to build a furnace. To do so, you will first need to mine a little bit (about twenty) stone, but that should be achievable during the first few days at more or less surface level, so no need to panic about diving into a cave just yet. The furnace will allow you to smelt copper, iron and other ores which you find later, enabling the resulting bars to be crafted into invaluable armour, weapons and tools for your character.

Alchemy Station – this one is a little bit more involved, but invaluable. Firstly, make a wooden table or bench (or you can use your workbench) to create a flat, wooden surface. Now, you need some sand, which can be tough to find. Wait until the morning and then head out on the surface and you will inevitably come to the desert biome of the map – if you feel you have been going for ages and become vulnerable, you may also find sand near the surface in some of the auto-generated caves. Once you find it, grab a load and head back to your house. Now, you need to smelt the sand in the furnace to make glass, then the option to craft a bottle will appear – it takes two glass placed in the furnace to create one bottle. Pop a bottle on top of the table/bench and you have an alchemy station, hurrah!

Lesser Healing Potion – the recipe for the lesser healing potion consists of several simple ingredients which you will probably have seen or even picked up already. You need some gel (dropped by dead slimes) mushrooms (lying around all over both the surface and on the floor of caves) and some glass bottles.  We recommend that if you plan to go exploring that you stock up on potions beforehand, as even on normal difficulty, death is not fun when you’re deep in a cave full of awesome loot.

Ironskin Potion – another invaluable potion for the fledging adventurer made from relatively simple ingredients. Take a look on the surface for some small yellow flowers – chop as many of them down as you can and get collecting, then head below the surface to locate some iron ore and water – again both are usually fairly near the surface. You’ll need to collect some bottled water using excess empty bottles, so go ahead and do so. Head back to the alchemy station and craft away – ironskin potions provide a bonus to toughness which lasts for a while, so they are worth having. 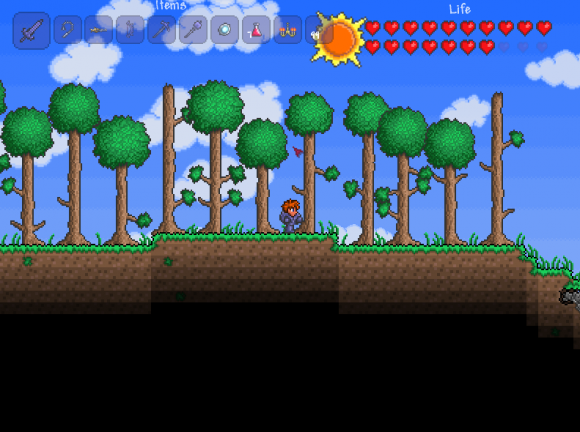 Well if you’ve taken our advice, you should now have a decent safe haven constructed and quite a few potions, as well as a new weapon at the very least. If by chance you have collected a lot of copper or iron already, you will probably be able to create some basic new armour or possible an iron or copper broadsword (both featuring the handy overhead swing arc and more damage than the wooden one we’ve just made.

You need to head on out and see what Terraria is all about, safe in the knowledge that you will be much more survivable with a few new items. The first thing to know about Terraria is that the map is split into various areas or biome’s, which include standard, jungle, corruption, desert and others. You can probably guess which is which once you get there, but really they are for later – the enemies outside of the standard starting area are tough and will probably kill you quickly. If you must go there (to the desert for sand, for example) then try and get out of there as quickly as possible until you feel more confident.

The real intrigue that Terraria offers is actually found in vast network of underground caves and the secrets held within. Walking around on the surface will quickly lead you to a tunnel entrance, which is always a good place to start. The enemies in caves start out quite tame, with bats and alternate slimes to begin with, which are replaced by skeletons and other nasties as the player descends further. The risk is worth the reward though and it is well worthwhile collecting plenty of iron and silver (as well as more precious metals/stones if you find them this close to the surface) as you progress. This will allow you to craft yet more advanced weapons and armour to allow for even deeper runs.

If you’re very lucky, you may also come across chests whilst exploring caves. Chests contain a lot of useful and often unique or uncraftable items such as glowsticks, Pegasus boots and more, so it’s always worth opening them. If you are able to clear all of the contents of a chest, use your wooden hammer on the chest to enable you to collect it and return it home for reuse as private storage! Finally, only by exploring more and more deeply into caves will you be able to collect pieces of heart, which permanently increase your characters health bar.

And there you have it, enough information to get you started in the world of Terraria. Remember that collecting everything (even the most pointless junk) and returning to the house to try different crafting options is always worthwhile. When a new object becomes available to craft, even if you don’t want it, craft some anyway and see what else opens up – making iron chain is a perfect example of this, as it leads to the absolutely essential grappling hook, but there are many more examples as well.