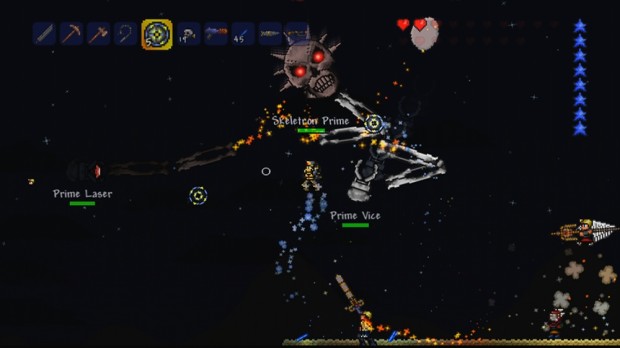 In our Terraria Startup Guide, we explained that it was always a good thing to experiment with crafting and combining ingredients to make as many things as possible. Well… That’s not actually always true, because sometimes combining ingredients can result in some terrible. Something awful. Or at least, a terribly, awfully tough boss encounter. In this part of our guide then, we’re going to explain how to summon (or avoid summoning) each of Terraria’s bosses, as well as how to defeat them if you do.

The Eye of Cthulhu

For most Terraria players, the Eye of Cthulhu is the first boss to be encountered and should be…. relatively easy to defeat. Should you want to summon him at your own leisure, you’ll need to find a suspicious looking eye, or craft one (by using at six lenses at a demon altar), otherwise the Eye will simply appear by himself one night once your character reaches a certain level of HP and has three or more NPC’s living in the house.

To defeat the Eye of Cthulhu, you’ll need to have equipped the strongest weapon and armour available (preferably at least gold armour) and it’s always best to have either a melee weapon with very high damage and a wide swing arc or better still, a bow with fire arrows, some shuriken, or another weapon which has a chance to inflict multiple hits. However you’re armed, the Eye will always use a lot of charge attacks, so dodging is essential. The Eye also spawns a large number of Servants of Cthulhu, so try to keep them at bay with your sword and switch to the ranged weapon for attacking the Eye itself. Be aware that the Eye has a second stage once a certain amount of damage is done, and will be more aggressive from then until death.

Although he takes a little more finding than the Eye of Cthulhu, the Eater of Worlds can be defeated easily with a bit of chance and good use of terrain. Should you wish to summon him, you will need to travel to the corruption and shatter three shadow orbs (which are glowing crystals which usually lie beneath the surface) or alternatively, craft an item called the worm food (using thirty vile powders and fifteen rotten chunks – found in corrupted mushrooms and eater of souls respectively). Note that the Eater of Worlds can only be summoned inside the corruption and will flee if you happen to leave.

The easiest way to defeat the Eater of Worlds is positioning. The Eater is made up of numerous sections, which once separated from the original head can end up with heads of their own. You’ll need a strong melee weapon to defeat him and the best bet is just to follow his looping attack patterns, then place yourself just out of range and keep chopping away. Eventually he will fall and if you’re very lucky, you will be more or less undamaged. 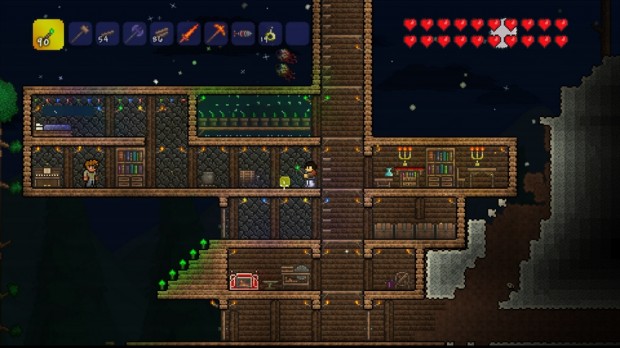 Skeletron is perhaps the most ridiculously hard boss in any game, relative to how quickly you can actually reach him. Somewhere in every world is a dungeon with an old man standing outside. If you talk to the old man at night time, he will turn into Skeletron. Note that Skeletron can only be summoned once in each world, once he is defeated then he is gone forever, although if he defeats you then you will be able to return and speak to the old man again. Oh and if you try to enter the dungeon before Skeletron is killed, then you will be instakilled by a dungeon guardian.

Bearing in mind how tough Skeletron is, there is no easy or sure fire way to defeat him really. Especially as you’ll basically be fighting at the dungeon entrance on his terms, so terrain does not provide the advantages it might against other bosses. By the time you reach Skeletron, if you have any friends to call upon then now is a good time to do so, likewise if they feel like sharing weapons, ammo, potions, armour or anything else then that would also be a good thing for you to ask about. Your best bet is to aim for one or both of the hands first (even though killing the head ends the fight) because they possess the biggest threat and also have lower HP. You’ll need a decent weapon by now, something like a flamarang or a minishark if you can afford it – as well as some decent armour like gold or better. In any case it’s going to be a tough slog so keep trying and if your weapons don’t appear to be damaging him, then consider another approach, or wait a little until you have better kit.

The Wall of Flesh essentially acts as the end of game boss between the standard game world and the version known as ‘hard mode’ – notable because this change in difficulty is not tied to the character as per the selection at the start, but is in fact an evolution (or devolution) of the world towards a greater state of corruption and consequently, danger. The Wall of Flesh is summoned by dropping a voodoo doll into a pool of lava in the underworld.

In order to stand any chance of defeating the Wall of Flesh, it is absolutely essential to prepare carefully with the very best weapons and armour available to you. It is more or less a given that in reaching the underworld, you will have already cleared the dungeon and therefore you should have a lot of loot, so use your judgement in choosing the most suitable. Assuming that you don’t somehow summon the Wall of Flesh by accident (it can happen) then you’ll want to prepare the area by creating a bridge over the lava to make the area safe for your own use. A single line of blocks will do, but try to make it across a long lava pool of at least five hundred blocks to give yourself room to manoeuvre. Traps work well against the Wall of Flesh, so if you have spiky balls, throw them all over the bridge – you’ll need hundreds though! If you’ve prepared well and have lots of buffs and potions, then you should be OK, but like Skeletron, if it seems to be going badly – just withdraw or try again with friends who have better gear. 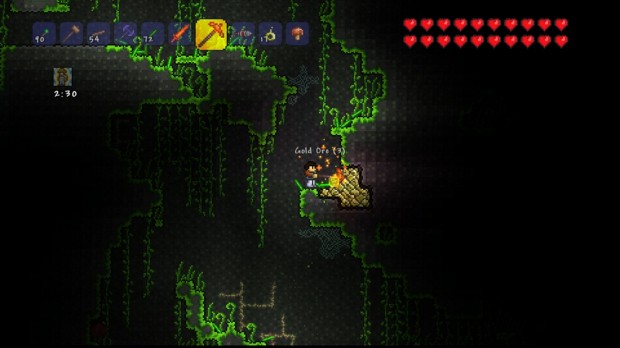 The Twins are basically the hardmode version of the Eye of Cthulhu, albeit much, much tougher and that there are two of them. These guys are summoned by crafting a mechanical eye (three lenses, five copper, five iron, seven souls of light) which must be used at night and present quite a stiff challenge.

The easiest way to defeat these guys (in addition to having at least adamantite or hallowed armour and similar quality weapons) really is to create an environment in which you can use the terrain to your advantage. The most common way to do this is by building a sky bridge of about five hundred blocks wide, which will mean that The Twins can do their thing flying up and down and you will have a relatively easy time dodging them. Like the Eye, these guys both transform into tougher versions of themselves, so it’s a great idea to attack them one at a time – that way you only face the more aggressive version of one or the other at any given time.

Hmm, well you guessed it, the Destroyer is basically a hardmode version of the Eater of Worlds. Not surprisingly, this is actually a very, very tough fight and there is no shame in saying that we had to seek assistance from a few forums for the best methods to kill The Destroyer. This time you’ll need a mechanical worm to summon him, which is made from six rotten chunks, seven souls of night, five copper and five iron.

Here at XBLA Fans, we found that the most success could be found by using a fairly wide (about thirty blocks) vertical ‘tower’ like structure, with wood platforms at regular intervals and then a strong melee weapon alongside the best armour. The Destroyer will be visible at all times using this method and it will be possible to get a lot of hits in – it’s well worth noting that the probes which he can spawn will almost always drop hearts when killed, so you can actually absorb extra damage from The Destroyer himself as long as you keep collecting the health. Don’t forget to buff with potions either and have a flight item equipped for rapid ascents up the tower if needed. 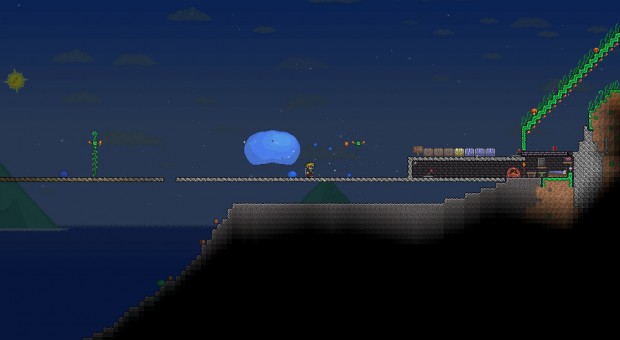 This boss is definitely (and obviously) a remix of the normal mode equivalent, but with some SERIOUS hardware upgrades. This time Skeletron comes with a vice, a laser, a saw and some sort of grenade launcher. Oh dear. Summoning him is achieved at night through the crafting and use of a mechanical skull, which requires thirty bones, five iron and five copper, then five of each souls of light and night.

We’d be lying if we said Skeletron Prime is anything short of nigh on impossible to defeat. You’ll need adamantite or hallowed armour as a bare essential, plus a shedload of buff and healing potions. For weapons, you’ll probably want a hallowed repeater, megashark, clockwork assault rifle and cursed or crystal bullets – you’ll also need a lot of ammo. A common strategy is to once again use suspended platforms of about one hundred blocks wide – plenty of manoeuvrability is essential and being of the ground is too, because that way the grenades won’t detonate and cause you huge damage.

The most threatening part of Skeletron Prime is his saw arm – this should be destroyed first and dodged at all costs, hence the reason for the platforms – dodging vertically is a key benefit here. The next target should probably be the laser arm – it doesn’t do a lot of damage, but if you’re going to attack the head it needs to be out of the way and as it is ‘relatively’ easy to kill, it makes a sound secondary target. The cannon arm is likely to have been rendered useless by your cunning platform strategy, so pay it no mind as you now go for the head – the vice arm is easy to dodge, but kill it if you want.

By now you’ve probably noticed the pattern. You’re thinking “this guy must be the hardmode version of Wall of Flesh, right?” Wrong! Not this time! Ocram is actually an exclusive boss which features only on the console version of the game. After what you’ve already faced in defeating Skeletron Prime, this guy should be no major problem! To summon him, you’ll need to craft a suspicious looking skull which requires a mechanical skull, two mechanical eyes, twenty adamantite bars, ten souls of blight and ten of light. Phew.

As per usual, you will need the very best armour and weapons that you can possibly get your hands on – that means at least adamantite armour and some serious weaponry like the megashark plus cursed or crystal ammo or an equivalent high level melee weapon, even though melee is tough because he is hard to hit. That said, a melee weapon (like Excalibur) is useful for killing his followers and hardvesting those hearts! His attacks and approach are fairly similar to the Eye of Cthulhu (with added lasers), so another floating platform environment can be useful in ensuring he is defeated without too much trouble.