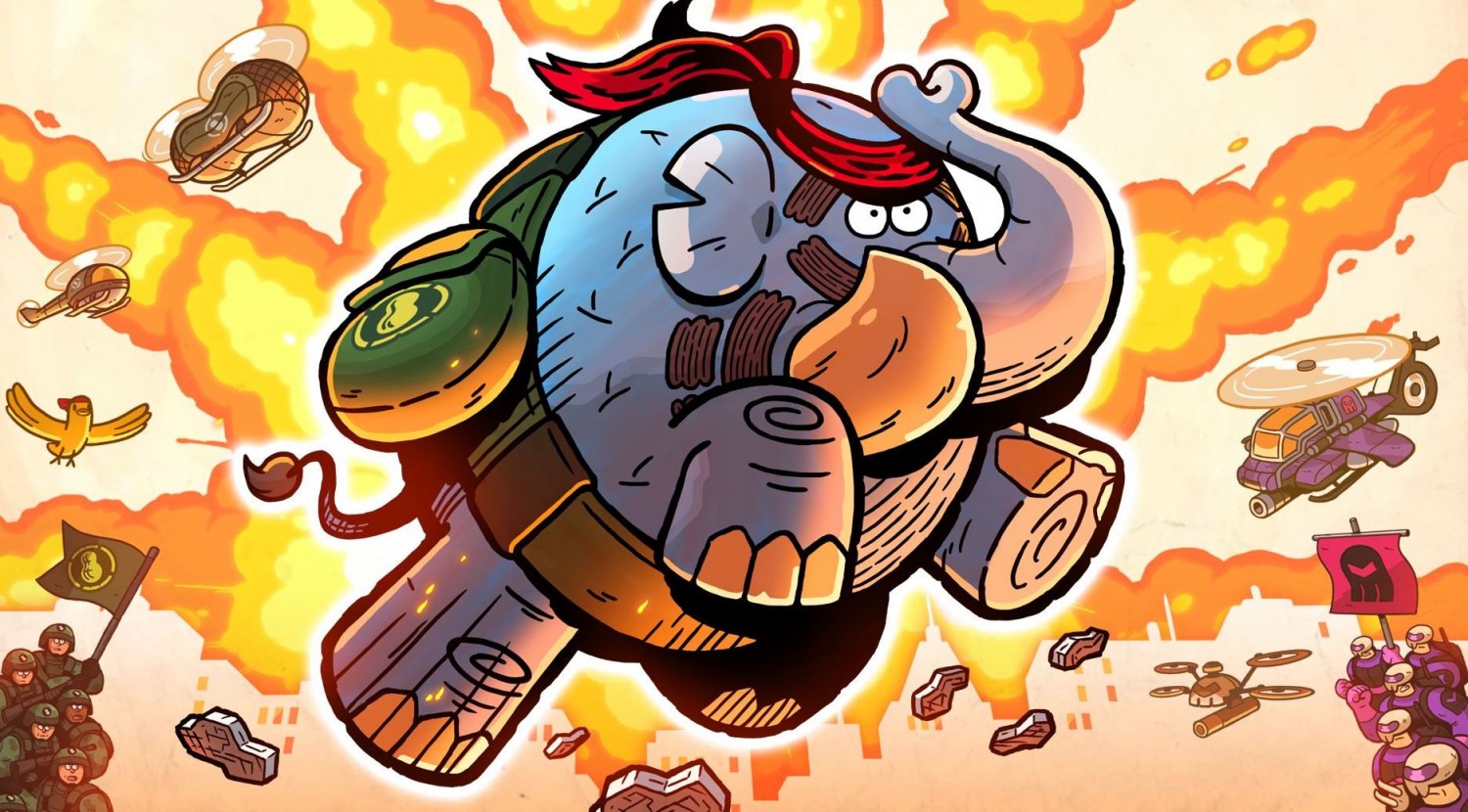 Elephants, as you may have noticed, are hulking, lumbering animals, so they’re probably not the first creatures that come to mind when you think of blazing speed. Luckily, side-scrolling platformers don’t need to follow the rules of reality, which is why you won’t spend much time wondering how it is that Tembo: the Badass Elephant‘s eponymous protagonist is able to move at a pace not normally reserved for 15,000-pound mammals.

In Tembo, the fact that you’re fast is every bit as important as the fact that you’re an elephant. Playing Game Freak’s platformer feels reminiscent of what you’d imagine the Donkey Kong Country series’ Rambi sections would be like when played with a turbo controller. Earlier levels are set up to let players take full advantage of the fact that you’re basically playing as a speeding freight train. You’ll charge through them with reckless abandon while using Tembo’s charges, slams and, um, built-in water gun — he is an elephant, after all — to bust through obstacles and mow down woefully unprepared bad guys. Tembo loses sight of what makes it fun when it introduces dreadful challenges in its later stages, but it’s an otherwise fun elephant ride while it lasts. 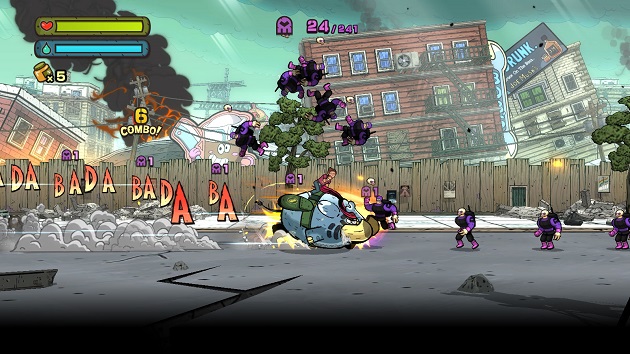 Pachyderm power — Too often games have given players control of ridiculous anthropomorphs without giving them a move set that takes advantage of that situation. Not Tembo. Take off running and Tembo will lower his head and prepare his pointy tusks to ram into whatever comes. Approach a fireball and you can use his trunk to quench the flames. Even the collectibles are elephant-centric. Sure, peanuts that add up to peanut butter used for extra lives were a no-brainer. But there are also hidden NPCs waiting to be freed from Phantom, the evil force the army has Tembo in to dispatch. Having the freed NPCs pile onto Tembo’s back and run on top of him like circus performers when he balls up to perform his roll attack is a nice touch.

Something borrowed — You already know that Tembo was informed by Donkey Kong Country’s Rambi, but that isn’t the only obvious source of inspiration on display. It’s appropriate that Sega published Tembo, because Game Freak has done something more interesting here with the basic Sonic the Hedgehog concept than anything its creator has done in longer than anyone can remember. Game Freak’s platformer is at its best when it’s letting you rush forward at top speed. Since this is a side-scroller, you don’t know what’s coming next until the screen scrolls to show it. And when you’re running as fast as you can, you’ll have little-to-no time to course correct when something deadly and unexpected appears ahead. Running is so much more entertaining than plodding along at a safe pace, though, that you’ll do it every chance you get.

Killer collectibles — Every Tembo level has a way you need to go as well as several other ways you probably should go first. Hidden in the secret nooks and crannies are people waiting to be saved, peanuts waiting to be collected and enemies waiting to be killed. You’ll never feel inundated with too many collectibles. Instead, even cursory exploration will turn up a healthy number of pick-ups — yes, Game Freak has made dead enemies a collectible, which maybe isn’t surprising considering that’s basically the entire concept of the studio’s Pokémon series. My favorite hidden rooms are those with giant bowling balls that must be pushed along to take out pillars, walls and Phantom troops. I don’t know who left all these giant bowling balls laying around, but I’m sure glad they did it. 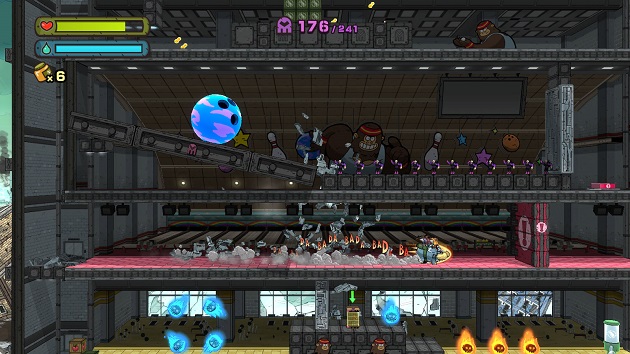 This is the end — For most of Tembo‘s 18 levels, the difficulty slowly builds while layering on new concepts and baddies, and all is well. Then you get to the final section of the game and Phantom unleashes hell. The final level starts with a gauntlet of enemies armed to the teeth followed by a mech mini-boss accompanied by a smaller enemy. It’s tough, but doable. The next section is much the same — only with tougher enemies and a tougher mech and a tougher accompanying enemy. The section after that? You guessed it: the same thing but with all enemies once again being an order of magnitude more difficult. If self-flagellation is your idea of a good time, then you’ll find much to love in this endgame. Otherwise, you, like me, might find yourself inventing new curse words while feeling your blood pressure rise. And that’s to say nothing of the last boss’ “This isn’t even my final form” routine. Is there any way I can get back the three hours of my life it took to overcome these ridiculous challenges?

Is that a car alarm — Video games have a long and storied history of playing super annoying sound effects when a character is nearing death. Tembo continues that tradition with a sound that continually had me looking out the window to see if a car alarm was going off. This isn’t something that drags down the experience in any meaningful way, but it is a minor nuisance that you will regularly have to deal with, so be ready for it. 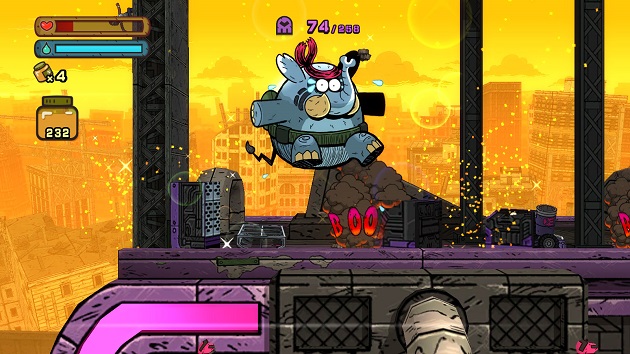 Ideas that were first seen in other games pervade the world of Tembo the Badass Elephant. But while it’s true that the games industry can always use more wholly original ideas, it also has plenty of room for creators who combine pre-existing ideas in ways no one has thought of before. Though Game Freak’s obsession with suddenly forcing players to prove their ability to take an abundance of beatings and keep coming back for more does derail things a bit, it’s not enough to ruin an otherwise excellent 2D platformer.

Tembo the Badass Elephant was developed by Game Freak and published by Sega. It was released July 20, 2015 for $14.99. A copy was provided by Sega for review purposes. 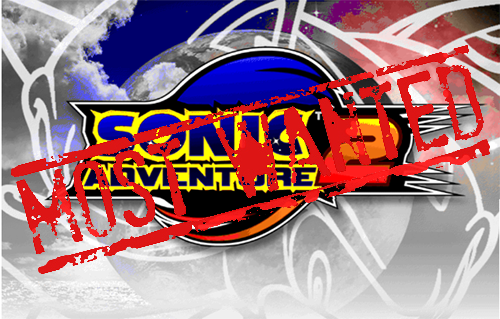