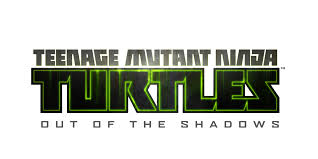 Teenage Mutant Ninja Turtles: Out of the Shadows review

Teenage Mutant Ninja Turtles: Out of the Shadows was developed by Red Fly Studio and published by Activision. It was released on August 28, 2013 for $14.99. A copy was provided for review purposes.

Teenage Mutant Ninja Turtles: Out of the Shadows is a third person beat ‘em up game utilizing Epic Games’ Unreal Engine 3. After a brief introduction starring newscaster April O’Neal (in which she is playable, unlike the majority of the Turtles games), players take on the role of the four famous turtles, hacking, slashing and kicking their way towards a final confrontation with Shredder himself.

The game features more diverse terrain than in previous Ninja Turtle games, forcing the turtles to traverse rooftops, leap over buses, and wind through sewer tunnels while fighting the Foot clan and scientist Baxter Stockman’s endless supply of mouser robots.  In between each stage, the group returns to their lair in the New York sewers to train, learn new moves, upgrade their weapons and play arcade games.

Teamwork – The Turtles are always at their best when they are working together as a single unit, and that shines through in the gameplay of Out of the Shadows. All four of the turtles are always in play, even in single player — players may switch between them fluidly at any point. This allows for a variety of moves utilizing multiple turtles; Raphael or Michelangelo might kick an enemy into the air, switch to Leonardo or Donatello, leap over to that enemy and slam them back into the ground. Additionally, each Turtle has a specific team move — if a player (as one of the other three turtles) walks up to Donatello and uses a team special, they’ll be swung around on Don’s bo staff, taking enemies out in a circle. If the same move is used when Mike is nearby, Mike will throw them off of the end of his nunchuks for a massive single target smash. These team moves (and the “shell-smash” with all four combined) feel great and are the highlight of the game.

True to the source material – Out of the Shadows really nails the turtles aesthetic in a variety of ways. In addition to the team-based moves just discussed, the dialogue quips between the turtles during combat are fantastic (if slightly repetitive by the end), and the turtles’ lair has never looked better. It even includes a functional arcade machine! It’s too bad that the original Ninja Turtles arcade game many players will remember fondly isn’t available; instead, the arcade machine uses the same game engine and mechanics as the main game, just with the fixed angle of the older arcade classics.  It’s worth pointing out that the arcade mode allows for four-player local multiplayer, a dying idea that’s nice to see supported. 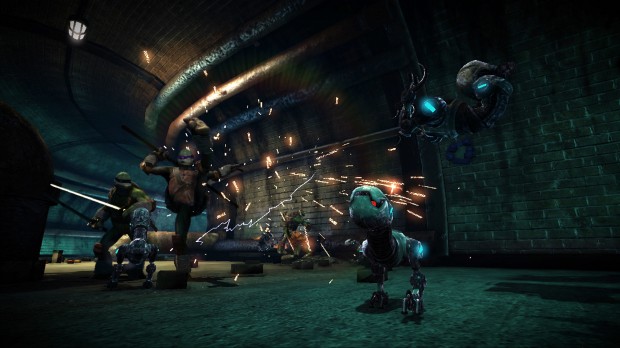 Unreliable inputs – Each of the four turtles has a variety of unique moves, unlockable as the game progresses. Unfortunately, these special moves are bound to specific degrees of rotation on the right analog stick. The game has trouble differentiating between 90, 180, and 360 degree rotations, and which special move a player performs is often based more on luck and less on skill. The team specials previously mentioned are spotty also, especially the group moves involving three or four turtles.

Repetitive gameplay – There are simply not enough enemy varieties to warrant utilizing all of the various combat moves available to players, rendering the majority of the complex move trees superfluous. For the overwhelming majority of the game, blocking and countering is completely unneeded, and against a boss character where knowing all of one’s options should be useful, blocking usually doesn’t work anyway. The end levels feel quite padded, with the same “destroy this object” task being assigned three or four times in a row, with nearly the exact same level design for each iteration.

Lack of accessibility – If you’re playing on anything smaller than a 40’’ television, local split-screen may not be for you. The text is impossible to read when the screen is split — some friends helping to test multiplayer had to sit right in front of the screen in order to read the difference between shurikens and grenades. The hacking minigame at computer terminals (a needless addition that only serves to slow the pace even without a ridiculous loading screen that freezes progress) essentially cannot be completed by a colorblind player, due to the small size of each icon meant to differentiate terminals.

Poor level design – When a turtle approaches a ledge, ladder, or object to be interacted with, it conveniently glows yellow. This is great, but it doesn’t trigger from far enough away, as often players will be left circling a rooftop looking for a ledge interaction that isn’t intuitive, or miss a ladder as they spin the camera searching for the next objective.

Glitches – While we did not encounter any game ending glitches reported by a few other outlets, in the arcade machine, there was one point when one of the turtles under player control became immobilized inside of the stage due to a clipping error. The only way out was to use a team special move by walking one of the other turtles over to the location. 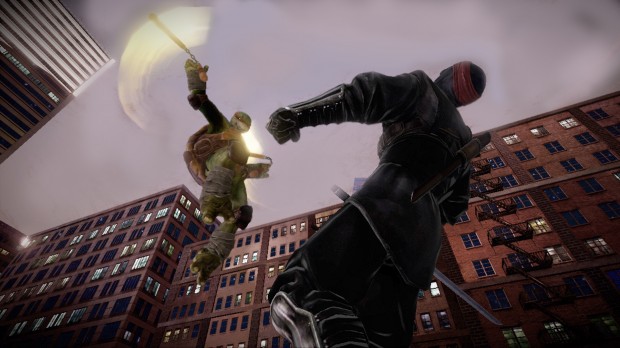 Teenage Mutant Ninja Turtles: Out of the Shadows is a difficult game to recommend to anyone that isn’t a fanatic of the franchise. There are vastly superior games in similar genres on the Xbox 360 already. Both Castle Crashers and Scott Pilgrim vs. the World are more deserving of your hard-earned dollars. Out of the Shadows feels like a game with great potential — the characters are well represented, and the environment (especially the lair — it’s too bad it isn’t playable!) looks fantastic. Unfortunately, what the Turtles have to contend with is a mediocre slugfest that feels archaic, even for the 1980s era in which a concept like the Teenage Mutant Ninja Turtles could shine.