According to Carthew, most of the group at Team 17 felt like a Worms revamp was long overdue before Worms: Revolution had a single line of code. Roughly two years ago, before true development on Worms: Revolution had begun, a presentation was given by key members of Team 17; it was a studio-wide event. Words were said, pictures were shown, heads were nodded — Worms: Revolution would be the “blockbuster” Worms game. “We aren’t just making another Worms game, we’re making the Worms game.” said Carthew. “Of course we’re going to call it Worms something”, but “revolution” really is the point of this new game, and everybody at Team 17 feels it.

“Team 17 has had its ups and downs”, says Carthew, “we really can’t afford to absorb many failures.” Carthew agreed with the criticism of Team 17 being a generally “risk averse” studio, in fact, he brought it up himself, but he explained that that’s part of how the industry works (even without a big publisher pushing your buttons). While Carthew is lead designer on the upcoming Worms: Revolution, he’s also worked on Worms games for the last 14 years. “When you’re a developer working for a company, you have to meet the needs of the company, and a lot of the time that meant working on a Worms game.” It’s understandable that consumers would sometimes react to a new Worms game with “Another one?”, but as the years went on Team 17 could feel it as well. Worms: Revolution is the end of that feeling, “everyone has been excited to work on this, it’s refreshing for us as well.”

On the subject of ups and downs, we also talked a little about Team 17 and XBLA. A fun fact: Worms XBLA is the 10th top selling XBLA game of all time according to Xbox.com (as of writing, Rock Band Blitz‘ position is glitched) with Worms 2: Armageddon coming in at #60. In contrast, episodes 2 and 3 of Alien Breed did not do so well, and the first episode (along with Worms: Ultimate Mayhem) are around the middle. 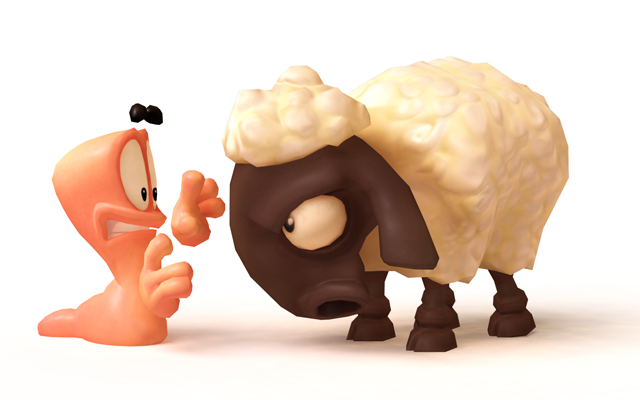 Indeed Team 17 has had its ups and downs. Carthew felt that simply going 3D heavily affected the core gameplay experience in Worms: Ultimate Mayhem and it didn’t resonate as well with people. With Worms: Revolution, he along with the rest of Team 17 wanted to be sure that the game felt like good ol’ Worms gameplay with some new, exciting twists rather than entire paradigm shifts.

Shaping Worms: Revolution involved taking a look at the core of what makes Worms an entertaining franchise. “We want Worms: Revolution to have those “I’ve never done that in a Worms game before” moments.” Carthew tells us. Arguably the biggest change to the Worms formula is the inclusion of four classes; the soldier, heavy, scientist and scout. On top of this new core mechanic are a rework of the “objects” featured in past Worms games. For instance, in a castle-themed level of Worms you may see a catapult, but it’s really just a piece of land sort of like a sticker. In Worms: Revolution, these objects have interactive qualities; should an explosion come in contact with a mushroom in the garden level, a large poison cloud sprays out, affecting any worms standing (sitting, laying?) too close. “Like with the classes, this change creates greater depth in the strategy of Worms“- Carthew spoke often of deepening the strategy in the upcoming game. While the class system and new interactive objects are bold, over-arching new gameplay features, much thought has gone into the weapon selection as well. “We wanted to bring the very best of Worms for this game in terms of both Worms character and strategy. For instance, the old lady is rather similar to the sheep as a weapon, but the sort of humor she represents is crucial to the way Worms is perceived, so she’s back in the game.” A new dynamic water engine has been added to the game to shore up the strategic representation of Worms, along with a few new utility weapons including a “tele-swap” and a “tele-shield”, you can imagine what they do. The new aspects of the game seem to target the strategic elements featured in gameplay, but the consideration and inclusion of Worms classics speaks volumes towards the idea of a true “blockbuster” Worms game.

A couple of times throughout the interview Carthew brought up development constraints, mostly when asked about things that didn’t make it in. “Originally there were five classes… When the concept artist came back with sketches for the heavy, he was much fatter than in his current design. This concept spawned an idea for a massive worm that once placed on the map could not be moved, but was incredibly powerful.” The other class was the “Athlete”, who was tall and lanky, and was essentially a super-scout. These two classes were cut, and while Carthew felt neither were particularly well planned, he was still disappointed. Carthew wanted players to have to choose a class to not include when readying a team for battle. Thus is the price of development: compromise. Beyond the core mechanical upgrades in Worms: Revolution, Team 17 wants to make sure people will know Worms: Revolution when they see it. Carthew mentions that “often when you see a screenshot of Worms you know it’s Worms but perhaps not which one exactly”. From that concern (as well as a drive to meet modern presentation demands) comes the new 3D rendered visuals, but also a change of theme. The new Worms locations are far more worm-like then they have been in the past, “we wanted to better capture the theme of the environments in Worms: Revolution“. On top of more realistic (though still comedic) environments, the worms are also considered to be worm-sized, so things like a tourist’s lost cell phone or dropped water bottle replace the weird, though somewhat stale-looking objects of older Worms games.

With the game going into submission very soon, it’s been all hands on deck to make sure everything in Worms: Revolution lives up to its name. Andy Davidson, creator of the original Worms, has returned to Team 17 to oversee the final stages of Worms: Revolution’s development. “It’s kind of nerving to have him back. When I joined Team 17 and met him I was a tester, and now I’m lead designer. It’s like I’ve been taking care of his baby for 14 years and he’s back to see how she’s grown up.” According to Carthew, Davidson is in sort of a “consulting” role, and after being shown the game Davidson was pleased with the outcome. Team 17 took his ideas and suggestions to heart going into the final stages of development. 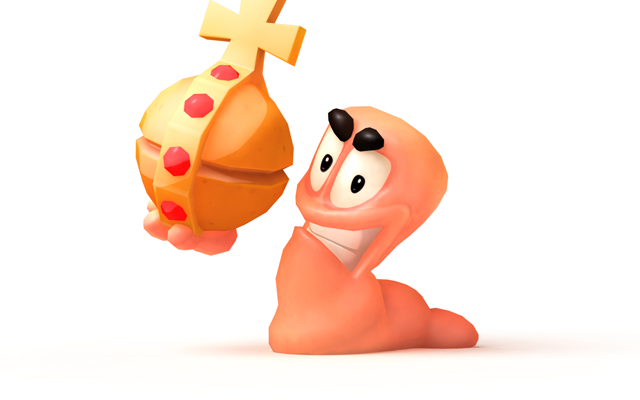 As we ran out of things to talk about, Carthew expressed much appreciation for Team 17 and Worms as a brand. A few things he was worried wouldn’t fit into the game did, and his confidence inspires my own. With such a long-running franchise, it’s easy to imagine development on yet another iteration being daunting, but fortunately that is not the case. Carthew was downright cheery and eager to discuss work he’s clearly quite proud of.

Worms: Revolution is partnered with Warner Bros. Entertainment for distribution and will be releasing sometime in the fall. If you haven’t already, check out the developer diaries for further insight into Team 17’s latest endeavor.