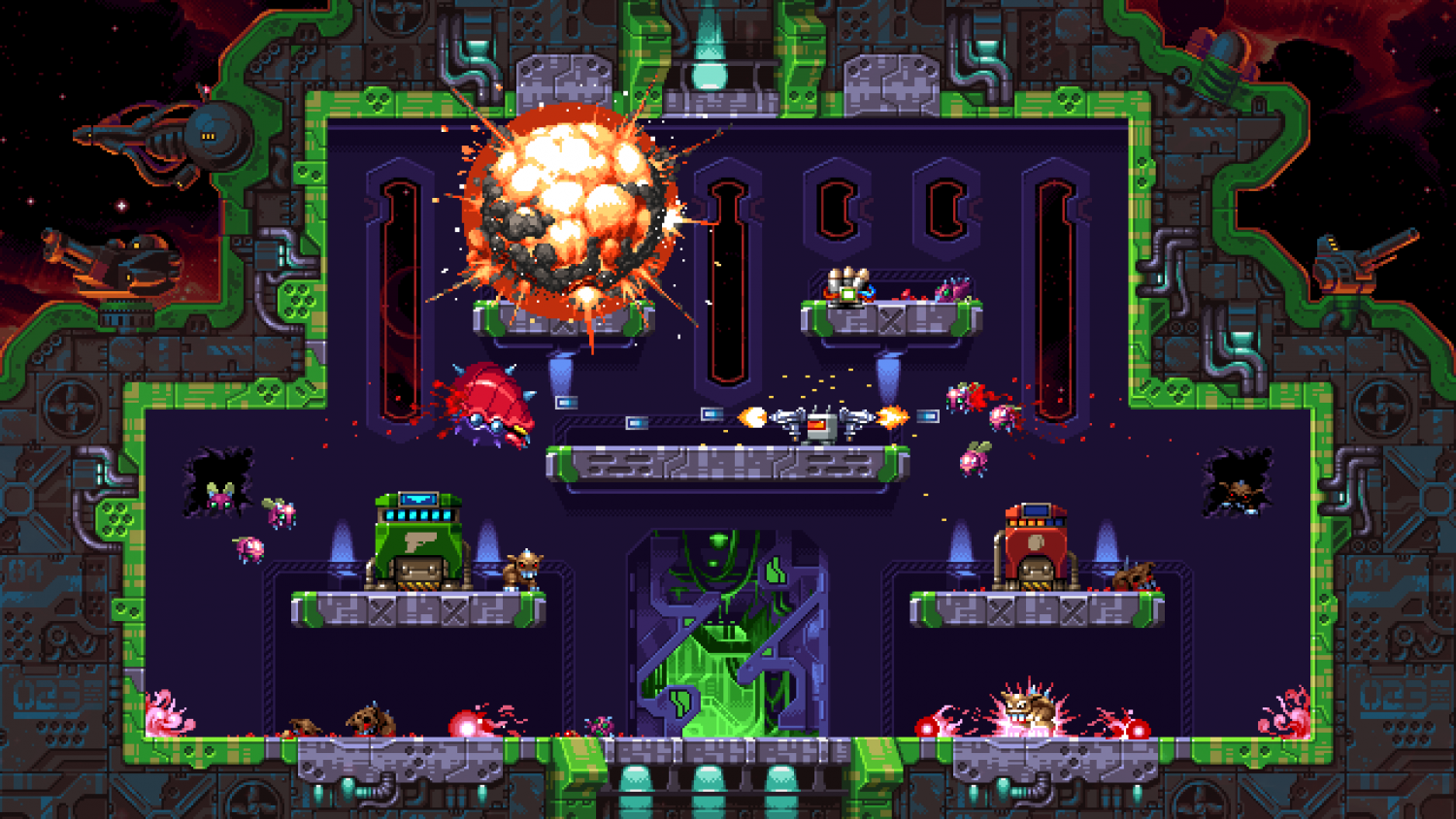 Super Mutant Alien Assault is a game with not much of a story and a very simple premise: kill the gauntlet of enemies with whatever weapons you can get a hold of. Of course, simple games can still be fun, but will this one prove to be worth the price?

While the main bulk of gameplay is killing enemies, there are a few more nuances to Super Mutant Alien Assault that make it a little different compared to other pixel shooters. First off, the player must pick-up a weapon from the weapon crate in order to fight enemies. As the player progresses, they will unlock additional crate types, extra powers and other weapons that can be issued from the weapon crate. In each stage, there is also a mutation canister that can mutate enemies into stronger forms. Later levels up the ante with additional objectives, such as having to load fuel into receptacles or defeat a boss in order to proceed . 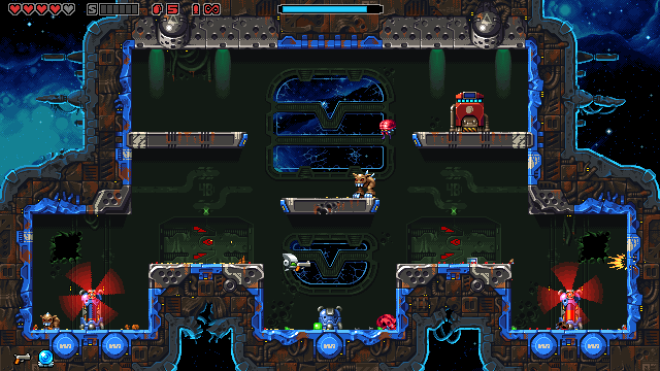 Short, arcade-style fun – Game sessions are usually quick, depending on whether the random elements of the level load in the player’s favor. Elements that can change from game to game include objectives, weapon crates, dropped powers and enemy types. Sessions usually end up averaging anywhere between 2 – 5 or 8 – 10 minutes, short enough to scratch an arcade gaming itch, but not so long that it’s tedious. The game also offers couch co-op, which can be both a blessing and a curse.

Art and animations are great – Super Mutant Alien Assault went more towards the retro end with their graphical influence over the game’s art work , but it’s very sharp , quality work. The animations of things like rockets exploding, enemies turning into bleeding pieces and even enemy attacks look fantastic. The folks at Cybernate did a fantastic job here with very sharp artwork . 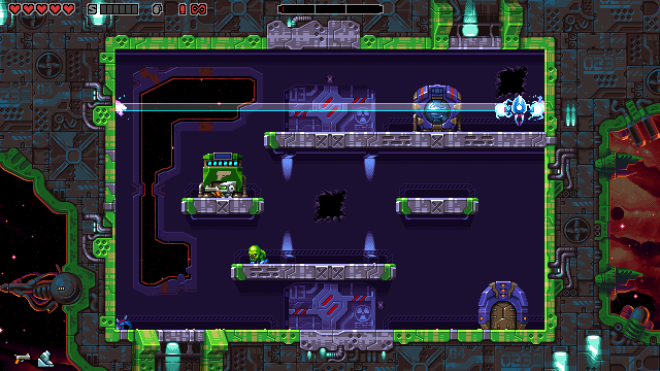 Randomness is (usually) not in your favor – The main gimmick that underpins Super Mutant Alien Assault is procedural generation of the levels and level elements are what keeps play fresh. Unfortunately, the random nature of the game can also make some rounds an exercise in futility. In addition to random elements of the level being present or absent, the item crates (such as the weapon crates) can issue random weapons. End up getting the wrong weapon for the wrong situation? The only option is to wait it out until the crate cools down and spawns something new. Eventually the player can unlock starting items and sidearms (to be used as back-up weapons), but those only unlock after a certain number of levels are beaten. The chaos from co-op can also get messy due to the random element when players receive explosive weapons from the crates and have to be extremely mindful of not blowing each other up.

Short and grind heavy content – Weapon and item unlocks are gated behind level completion badges. At the end of a playthrough, the game will provide a count of how many more level completion badges are needed until the next unlockable item opens up. Overall, Super Mutant Alien Assault is a very short game with 3 stages broken into 3 levels each plus a boss fight. After beating all 3 stages on normal difficulty (either back to back or going and beating them individually), the game opens up an “Endless” mode. If the player can beat all 3 stages in one go, they will unlock the 2 harder difficulties (“Heroic” and “Epic”) to play. There are no further levels to unlock, and enjoyment may be limited from repeating the 3 stages again to earn those stage completion badges. If brutal difficulty mired by procedural generation sounds stressful, this may limit your enjoyment.

Occasional graphical slowdowns are a damper – For a fast action game, the action can slow down to annoying levels due to the screen getting cluttered either with enemies and/oreffects. This can be really disruptive to the rhythm of the game and can ruin some of the precise platforming jumps the player may need to make in order to prevent losing life points or attempts to shoot enemies with precise weapons like the sniper rifle. Maybe this may be patched out in the future, but as it stands it’s a bit of an annoyance that breaks the feel of the game significantly. 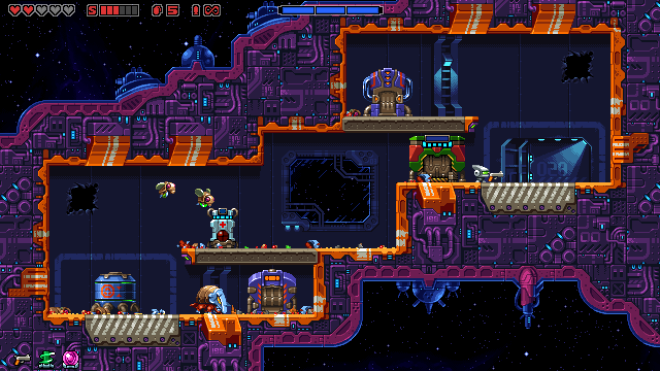 While Super Mutant Alien Assault stays true to the arcade inspirations of coin-eating games from yesteryear with fantastic artwork and 2D shooting action, it is cut at the hamstrings from reaching a wider audience by the varying challenge playthrough to playthrough. Random elements, graphical slowdowns from action heavy sequences and a focus on repeating games to grind out for equipment are not for everyone, but if the appeal of procedurally generated levels with brutal difficulty and near infinite replay value sound appealing, the game could represent a fun challenge at a reasonable price. I personally feel the slowdown issue needs to be addressed, since that can be a little aggravating in action heavy sequences.

Super Mutant Alien Assault was developed by Cybernate and published by Surprise Attack Games. The game will be available on Xbox Live July 12, 2016. A copy of the game was provided to us for review purposes. 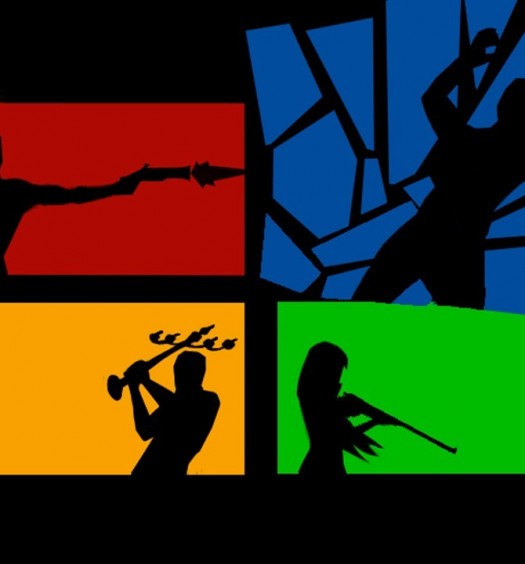