Slice Zombies for Kinect was developed and published by MADE on Xbox One. It was released on May 7, 2015 for $9.99. A copy was provided by MADE for review purposes.

“I don’t want to play this anymore.” Those are the words of disillusion I started to utter within 30 minutes of playing Slice Zombies for Kinect. This is a painful reminder that for every game that tries to raise the bar from its contemporaries, others are happy to coast along as a sub-par, unoriginal effort. It’s not fun to rate a game poorly, but what else can you do for one that aims to be nothing special?

If you’ve ever played Fruit Ninja Kinect‘s classic mode on any platform, you’ve seen most of what Slice Zombies game has to offer. For the rest of us who have not, the one game mode available in this title features players slicing up zombies. Shocking, I know. The player is given three lives (a fourth is available as an upgrade), and each time a bomb is sliced or a zombie is missed, a life is taken away. When all lives run out, the current game ends. Once the round is over, the player is given the option to play again or to go to the shop to buy upgrades earned from playing. In the store, you can buy power-ups to make the experience easier as well as view the modifiers that make the game slightly more challenging. Unfortunately, that’s all there is to the game. For the sake of this review, I decided to play longer, but after an hour I couldn’t take it anymore. It’s the same thing over and over. No more, please. 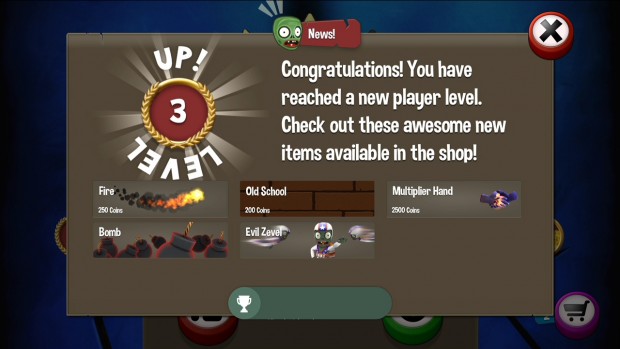 Nothing, zilch, nada — What follows aren’t things that I liked, but rather are things I felt less offended by.

Easy Achievements – I’m the kind of person who prefers to have a moderate challenge when it comes to obtaining some Achievements. But for the community that looks forward to easy Gamerscore, this game throws Achievements at you faster than you can say “Achievement unlocked.”

I’ve seen that somewhere? — Some tributes in this game bare way too much likeness to mascots from other companies. To name a few, there appears to be a zombie Mario and a mushroom-shaped coin formation from Nintendo’s Mario franchise, a zombie dressed up as a Rabbid from Ubisoft’s Rabbid series, a zombie Evel Knievel and more. I’m all for a good homage, but there has to be some originality to make it effective. Poor motion detection in menus — Players will spend most of their time with Slice Zombies in menu screens waiting to slice again. Unfortunately, any screen that isn’t the actual game is a massive hassle to maneuver around and requires both finesse and fortune to have a stress-free time. Slice Zombies simply refuses to acknowledge players under typical Kinect gestures (using your hands for on-screen navigation) in the menu system. There isn’t much to this game; I have no idea how this got overlooked.

Boring — Slice Zombies attempts to provide some gameplay variety by adding in different zombies that do different things. Unfortunately, it’s still the same singular mode each time, and the strategies you employ to dispatch foes don’t change at all. This game gets tedious very quickly. Ask yourself this: does one repetitive game mode that has been done better in other games sound like your idea of fun? If you answered no, Slice Zombies isn’t for you. I expect better from MADE on their next endeavor. If you like fast and easy Gamerscore no matter what you have to suffer through to get it, buy this game. Otherwise, hide your wallet before someone buys it for you.

Achievement notes: Slice Zombies for Kinect throws achievements at you as if they’re going out of style. Most will come within the first two hours of gameplay, and all of them are obtained through a short amount of play time. It’s a good thing too, because most gamers wouldn’t bother with anything requiring a longer investment in this game.

Kinect Xbox One Slice Zombies for Kinect MADE
Top