Skullgirls panel at Evo 2011 write up

Skullgirls, a fighting game being developed by long time pro Mike “Z” Zaimont and his team at Reverge Labs, plans to do a lot of things that fighting game enthusiasts have been wanting for years. Reverge Labs wants to make a solid game full of interesting mechanics, but also do little things here and there to remove the minor irritations that people can’t stand about games or fighting games in specific. During this panel at Evo 2011 much was discussed including all of the characters, game mechanics and features, and we’ve gone through and picked up as much of the relevant info as possible provided below the jump and cut into neat, cheweable pieces. Let us know if you need more steak sauce with that: So far Skullgirls has four characters with the one announced at Evo. While initially it was assumed the roster will have eight characters, Reverge Labs has switched to not being able to comment on how many characters there will be, so who knows what the initial roster will be, but DLC plans are already in the works. Either way, here’s what we’ve got on each character discussed at EVO written as things were said:

The new character Parasoul has been detailed here in her announcement post, but she’s a zoning character with traps and range rather than lots of projectiles. She’s got a variable-use Soldier Call attack which can be used for protection or for attacking in its many varieties including a grab that brings enemies to the other side of the screen and a projectile blocker. Her napalm tears are her main attack though which place mini time-bombs at any point across different arcs (players decide where they go) and can be quick-detonated by being hit by any fire attack (most of her umbrella attacks). She’s part charge, part directional input, all woman as she’s very tall and stern looking.

Peacock is a zoning character inspired by 1940s cartoon antics. As a zoning character she has a one button projectile which can be cancelled into specials, making her very effective from range. Speaking of specials, many of her attacks and special attacks are full of references to other games of all sorts, not just fighting games. The list is pretty huge, apparently there are about thirty just for “drop heavy stuff from the sky” attack. Her repertoire also includes projectile attacks to supplement her zone game.

Skullgirls’ grappling character, Cerebellum, is all about grabs, throws and four-arms. Like any grappler, she’s got plenty of command grabs, but command grabs are different in Skullgirls and arguably far better for it. Instead of hitting a punch or a kick, any command grab is executed with the throw button (default weak punch and kick) and a motion. Cerebellum has a grab for down forward, down back and “DP” (aka forward, down then down-forward diagonal) motions with a 360 motion for one of her supers. She also possess a command run with super armor (she can take one hit while doing it before she’s stopped) and some of her normals can stagger if they connect without being combed into. Her gameplay was closely related to that of Potemkin (Guilty Gear) and Juggernaut (Marvel vs. Capcom).

The last character, or rather the first character as she was announced first, is Filia, a rushdown type. Her and her head-adorned parasite Samson are all up in their opponents’ faces with high speed and a reliance on dashing and air dashing. Filia posesses a roll attack for use both on the ground and in the air as well as a drill attack which comes out of the ground and can be aimed with the different buttons. She also has an anti-air attack with the “DP” movement, but it’s got a long cooldown so be careful. Apparently Filia plays a lot like Magneto from Marvel vs. Capcom complete with square jumping, resets and air-dash cancels.

It’s apparent that amongst even the four characters that exist there’s plenty of variety in play style and in theme. When asked about how the characters come about, when suggestions are made for characters typically Mike Z will receive hundreds of photos describing how the character might behave in a several different ways, not just fighting. For instance there was on submission for Filia where she was simply at a grocery store. As Mike goes through the photos he’ll take into account recurring themes or actions, for instance Cerebellum may have had several photos wherein she was grabbing people or throwing them, so she became a grappler. After that it’s all gameplay, but plenty of work goes into the theory side as well. 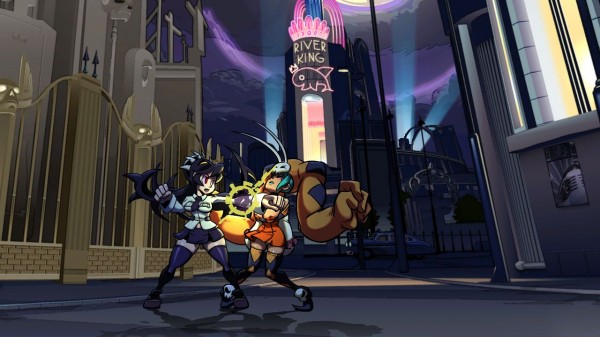 Fighting games have an amazing capacity for bits and pieces to learn and follow with movement, execution, and timing. Skullgirls is no exception exhibiting many finer mechanics to pay attention to as well as more general ones. Players are free to go with one character with plenty of health and damage or they can pick two or three characters each of which will be less powerful/tough, however they can call in assists or tag out if the going gets rough. To supplement that, instead of having to pick through a list of assists, though that’s still an option, players are free to customize their assists complete with a stick motion and button input, but no supers or air attacks. That means it can be as complicated as a special move, or simple as a single jab. Assist characters are still vulnerable to attack and combo and actually have a few frames of vulnerability before even attacking, so a well timed assault can stop an assist. Assist characters can also be snapped back (forcibly removed) along with the point character being tagged out (that is, both can be hit by the same snap back attack).

On offensive end, Skullgirls plays similarly to games from the versus series however without the irritation of infinite combos. That is, if the game detects full repetition of a combo red sparks will fly from the hit effect and the defending player can immediately break free at no cost by hitting any button, however if the attack is varied (let’s say it begins the same way but then ends differently) it can be continued until the attacker runs out of moves. This is done instead of providing limited-use breakers or implementing stun/dizzy mechanics. Unlike some games like Marvel vs. Capcom 3, Skullgirls will not be implementing a dedicated launcher button, instead players will have to figure out what it is as each character does have at least one. Another huge issue beyond infinite combos in fighting games is how the super meter will work and how it’s charged. Of course landing attacks or being hit charges the meter, but unlike most games players can build meter for whiffing any moves, even normals. Sounds crazy right? Well the catch is after or if the player has at least one level of meter filled, whiffing ANY attacks yields no meter. A smart trade off.

For every offensive mechanic there is a defensive one, especially in Skullgirls. Typical to versus style fighting games is push blocking, which is doable, but it’s different in Skullgirls. For instance, using push block earlier in a combo can limit the block stun, making punishing attacking combos more likely if timed correctly. On top of that, when push blocking players won’t take red life damage but do take regular chip (meaning players can die while push blocking still). Another defensive mechanic included are what are known as “alpha counters”, named thus for their initial inclusion in Street Fighter Alpha. Alpha counters allow players to attack out of the middle of a block string, so if their opponent is laying on the attacks and they are blocking normally they’d be stuck waiting for the attack to end. Instead they can attack out of that block string, provided they aren’t held back by block stun, with excellent timing; alpha counters can also be done in the air. 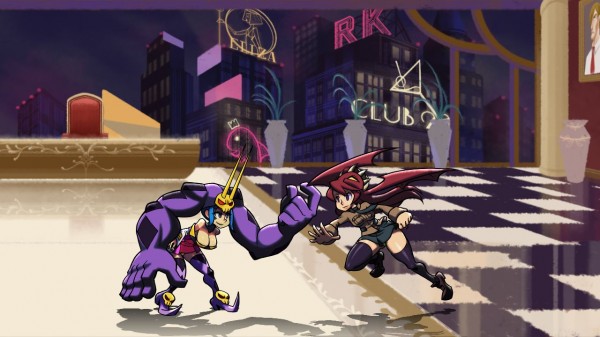 Skullgirls doesn’t stop at just defense and offense though, there are plenty of nifty bits here and there that really demonstrate the amount and level of thought put into some of the less conventional aspects of the game. For instance, the game has a mechanic which detects 360 motions, so players won’t inadvertently jump when trying to make a 360 degree motion, and this comes at no cost to jump responsiveness. One irritation we have, especially with newer players, is the pause button being hit while players are smashing about their controller; in Skullgirls, the start button must be held for a bit before activating. The list continues, some players dislike the normal button setups, but instead of forcing them to traverse menus they simply have to hit select and then hit each button in succession (light to heavy punches then kicks) to map the buttons to their liking. Another couple cool, possibly tournament inspired things are that one versus one matches are best two out of three as they are typically shorter, and there is a Tournament mode in the works which allows players to map their buttons immediately after picking their character and if during the match any controller disconnects they all do to ensure nothing unfair happens.

From a more aesthetic point of view, the characters aren’t sprites, they’re actually drawn larger than their representations in the game. On top of that, they’re rendered in a 3D environment (though they aren’t 3D models) so dynamic lighting affects them, well, dynamically, and it looks fantastic. This awesome lighting even affects fallen team mates who, instead of disappearing into nothingness, stay on the battlefield to be trampled in shame. However, they’re free to look fantastic as each character currently has 12 color swaps and counting, some of which are referential (for instance Peacock has a grinch color swap) as much of the game is, at least from a visual standpoint.

Skullgirls is shaping very nicely, complete with a lot of fixes for traditional fighting game irritations and plenty of things for players new to the genre to appreciate like their revamp of training modes. Beyond that Reverge Labs also has a philosophy for newer players and plan to accommodate them with easier inputs, but will not make them single button presses nor will they remove moves as Skullgirls is designed to teach new players, not to babysit them. We’re hoping for a Parasoul trailer or screens soon, but for now check out the footage from EVO 2011 up at the top of this post to get your Skullgirls fix.