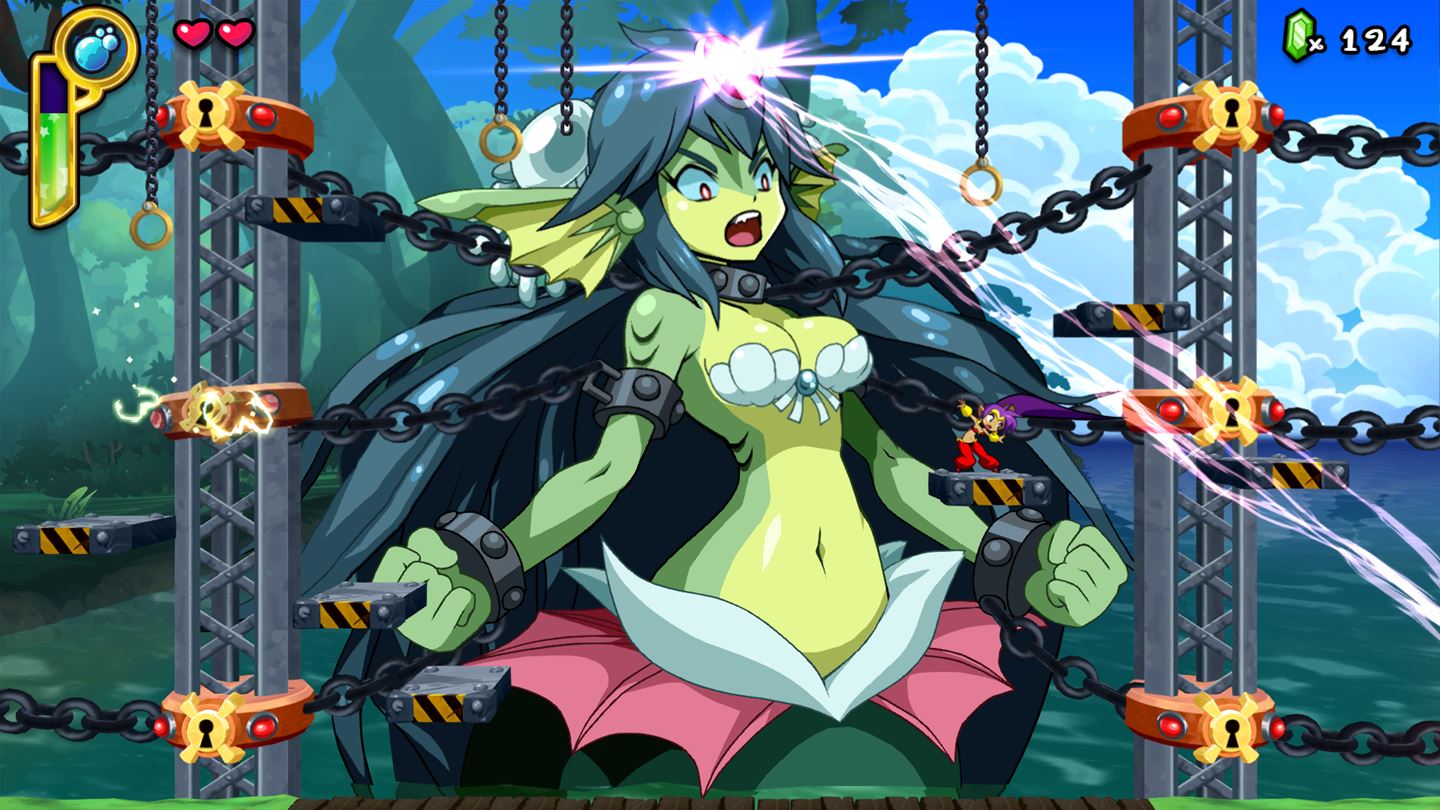 Shantae certainly has come a long way since her debut on the Game Boy Color back in 2002. The series has seen the release of 4 unique games in the 16 years since it’s release. Unfortunately, some of the earlier titles never saw the light of day on earlier Xbox consoles. Shantae graced the Xbox One back in March 2016 with the release of the third game of the series, Shantae and the Pirate’s Curse. Later in December of that same year Shantae: Half-Genie Hero would also release. Since that time, a large amount of downloadable content has been released for the game. Nearly a year and a half since the game’s release, WayForward has, at last, brought us the Shantae: Half-Genie Hero Ultimate Edition which includes the full game plus all extra content in one big convenient package. Eight different modes of content for $29.99. Is the ultimate edition a wish granted or a curse?

Shantae: Half-Genie Hero stars Shantae; a half-genie half human girl whose job is to protect Scuttle Town from an attack against any enemy. One day, her Uncle Mimic informs her that he wants to put together the dynamo, a device that when constantly powered will keep the town free from attack. The plans for the device are quickly stolen away by the evil Risky Boots, a devilish pirate woman and her band of Tinkerbat henchmen. Uncle Mimic tasks Shantae with recovering the plans and collecting all the different parts to construct the mechanism. The gameplay is simple. In each level, you are required to clear 2 – 3 different stages by running from the start of the level to the end. Enemies stand in your way, and the path is quite linear however there are areas off the beaten path that can lead to chests with upgrades or other different things. After the stages are clear you are required to fight a boss. The game does have other tasks outside of levels for you to complete which help to kill the monotony. Aside from the main game, the ultimate edition comes packed with 7 other modes. Pirate Queen’s Quest is an alternate story that allows you to play as Risky Boots on a quest to build the Dynamo and control the genie realm. Friends to the End tasks you with playing Shantae’s 3 friends, Sky, Bolo and Rottytops on a mission to free Shantae from a curse Risky has placed on her. Hard Core Mode is the main game with the difficulty ramped up to 10. It’s more of an old-school difficulty challenge to truly test a player’s skill. These are just a few of the extra modes the game has to offer.

Soundtrack – Don’t let it bother you that the soundtrack is first on this list. The game is fantastic on many different levels. It’s rare that a game will have you pointlessly standing around at a level doing nothing just so you can continue to hear the amazing soundtrack that the game has to offer. Each stage in a level offers a different musical track and more symphony to your ears. The soundtrack that Shantae: Half-Genie Hero has to offer will give you great reasons to do backtracking through previous levels, or even encourage you to buy the official soundtrack. Different modes come with different music for the levels and all of them are heavenly.

Creative Backtracking – The best type of exploration that a game can offer is the kind that requires you to come back to a level when you’ve got different abilities. Moving around a certain level, you come to a wall that looks like it should be able to be destroyed. Or you notice just off the edge of your screen, a treasure chest with no way to get to it. Simply playing the game and advancing the story may give you the tool you need to get some of the more hidden items in the game. There are even some collectibles that are way off the beaten path and only a true explorer will find. It’s interesting to see levels set up like this as it has you question what would happen if you jumped off the cliff this far up. Would you the player fall to your death, or would you stumble upon a secret area?

Hardcore Mode – The Hardcore mode that is included with the ultimate edition is completely optional. It’s probably best to consider giving the hardcore mode a playthrough after finishing the main game and finding you enjoyed it. Hardcore mode is what the main game should have been. To put it bluntly, the main game is a cakewalk where the hardcore mode actually has a considerable challenge for completing the game. The most recognizable differences right from the start are the increase in enemies, the damage the enemies do to you and the overall health of the bosses. Pirate Queen’s Quest – There’s always something interesting about being able to play the enemy in a game such as this. It allows you to see firsthand the types of abilities and skills the enemy has. Risky Boots is not a genie-like Shantae is, so she is unable to turn into different forms. She does, however, have a disposal of different pirate tools at her disposal. Starting out she has a sword and the ability to summon Tinkerbat henchmen. Every time you complete a level she is given another interesting tool. This mode will have you questioning who’s truly the better female.

Dialogue­ – The dialogue included in the game is interesting. Short parts of the dialogue are voiced by the character while the rest requires you to read. The whole concept gives players somewhat of an idea of how the main protagonist or her combatants sound. One interesting fact about this. The Kickstarter for the game back in September 2013 had an option for full voice acting had the game reached $1.1 million dollars in funding. The Kickstarter had only raised $776,084, so the complete voice work was never included. What is present is an interesting taste of what players could have expected. 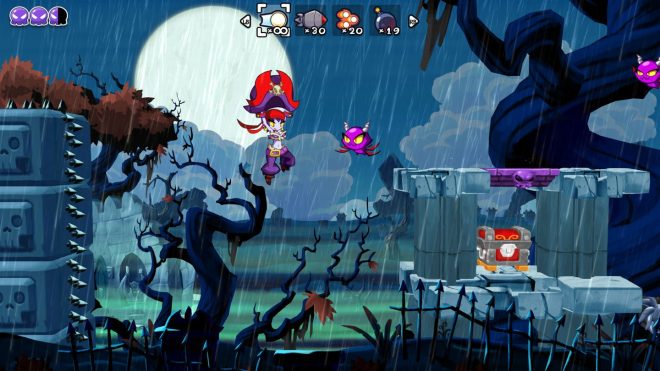 Friends to the End Mode – Possibly the only mode in the entire collection to not be enjoyable. You play Shantae’s three friends Sky, Bolo, and Rottytops as they transition through her memories around each of the levels from the game. Each character has their own power. Bolo can chain swing on anchors and punch big rock walls. Rottytops can throw her zombie head through dark energy barriers which will transition her body over to the point her head lands. Sky can throw a bird egg which creates a platform, she can also glide using her bird. The problem with the mode is the concept is a lot slower paced than every other mode in the game. With the slower pace, it also makes some of the platforming segments also feel tedious. It’s up to the player to figure out which character is needed for each levels obstacles. The controls are a bit clunky and the entire concept just feels complicated. The characters abilities can be leveled by collecting gems dropped by enemies and in various pots throughout levels. Each character’s level is separate from each other but they all share the same health bar. This mode would have been better if it were just the main game and your character was one of the three friends (or perhaps all three of them appearing in different levels). Even despite the many different modes featuring the same six levels, the game is still worth it for many other reasons. The phenomenal soundtrack, the funny and creative dialogue between characters and the interesting side stories between modes are what make the game a constant enjoyment. The game even comes packed with 46 achievements for those looking for a further challenge. Shantae: Half-Genie Hero Ultimate Edition is definitely a bundle that holds weight with content and replay value for the decent price. Other bundles of this kind normally cost double the money and offer less in value.

Shantae: Half-Genie Hero Ultimate Edition was developed and produced by WayForward. The game released on May 8, 2018, for $29.99. A copy was provided for review purposes.