Shank 2 was developed by Klei Entertainment and published by Electronic Arts. It was released February 8, 2012 for 800 MSP. A copy was provided for review purposes.

In 2010, the original Shank was released under a curious industry eye. Side scrolling brawlers are a well-worn genre, but for some reason Klei Entertainment had piqued the interest of the XBLA community. Shank was fairly well received, but stumbled in areas where it counts most, mainly in gameplay. The aptly named main character, Shank, traverses shipyards, jungles, and ancient ruins in search of his enemies, in hopes that killing them will ensure the safety of the people that are important to him. He slices, dices, and shreds enemies to bits with many different types of weapons and kills them in the goriest of ways possible. It seems Klei has upped the ante with this sequel, but does it deliver? 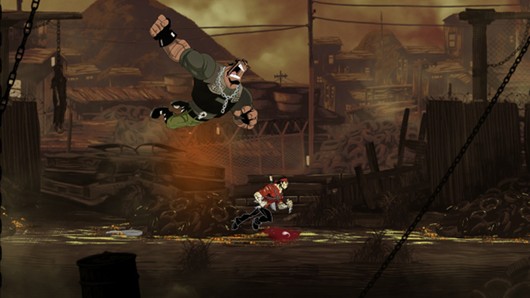 Solid, non frustrating mechanics – Something that seems to plague games in this genre is frustrating mechanics that get in the way of the gamer having fun. From Battletoads to the original Shank, there’s an annoying section or part to the gameplay that causes cheap deaths and broken controllers. Fortunately, Klei has given gamers a title that offers little to no frustration, and deaths that only amount to a lack of skill, not a fault of the developer.

Super responsive controls with fast animations – Shank 2 controls incredibly well. Every action is felt immediately after pressing the corresponding button, and the animation system reflects that. There is no question about when things are supposed to happen either, and the timing on everything from dodging to jumping feels spot on. Any time you want to do something, the game makes it incredibly easy, and makes you feel like a force to be reckoned with when you do it.

Satisfying action and superb balance – Boss fights and enemy AI can be a tricky thing to balance correctly. In Shank 2 enemies will shoot, smash, and destroy Shank in any way they can, and the different enemy types with wily AI make the game challenging, but not frustrating, making gamers master the controls to beat arduous stages. Not to mention the boss and mini-boss enemies are difficult but not TOO difficult, providing just the right amount of challenge to the ends of levels.

Fun multiplayer – Instead of making the campaign fully playable in co-op, Klei has decided to create a separate survival mode where 1-2 players can face off against waves of enemies until they are inevitably overwhelmed. While some may be disappointed by the removal of standard co-op, this mode was actually a blast to play through, and can get incredibly addicting when you add in different weapons and enemy types. 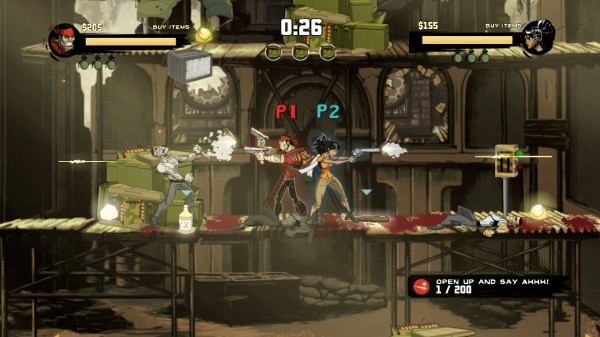 Multiplayer – While this was also a positive, it would have been nice to have a fully playable co-op campaign with a story like in the original Shank instead of a separate mode. The thought of blasting through a campaign with a buddy is just too tantalizing and obvious to not include in a game like this.

Short campaign length – Depending on your skill (or lack thereof), the campaign can be over incredibly quickly. Granted, Klei added incentives to replay levels on higher difficulties such as new outfits for the characters, but artificially extending the hours played on a game doesn’t change the fact that it can be finished in a few hours. Games like Shadow Complex can pull off being beatable in a short amount of time because of the many different ways you can explore the world, but Shank 2 is incredibly linear with its level design. 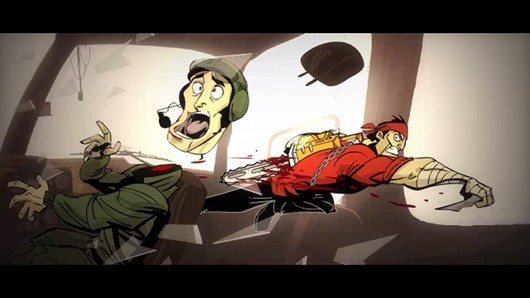 Shank 2 is an incredibly solid game, and it has the most important thing that a lot of games seem to lack: it’s fun to play. While the campaign is short and the multiplayer isn’t as fleshed out as it could be, the whole game is fun the whole way through, and that is not something to scoff at. At 800 MSP, this game is a steal.