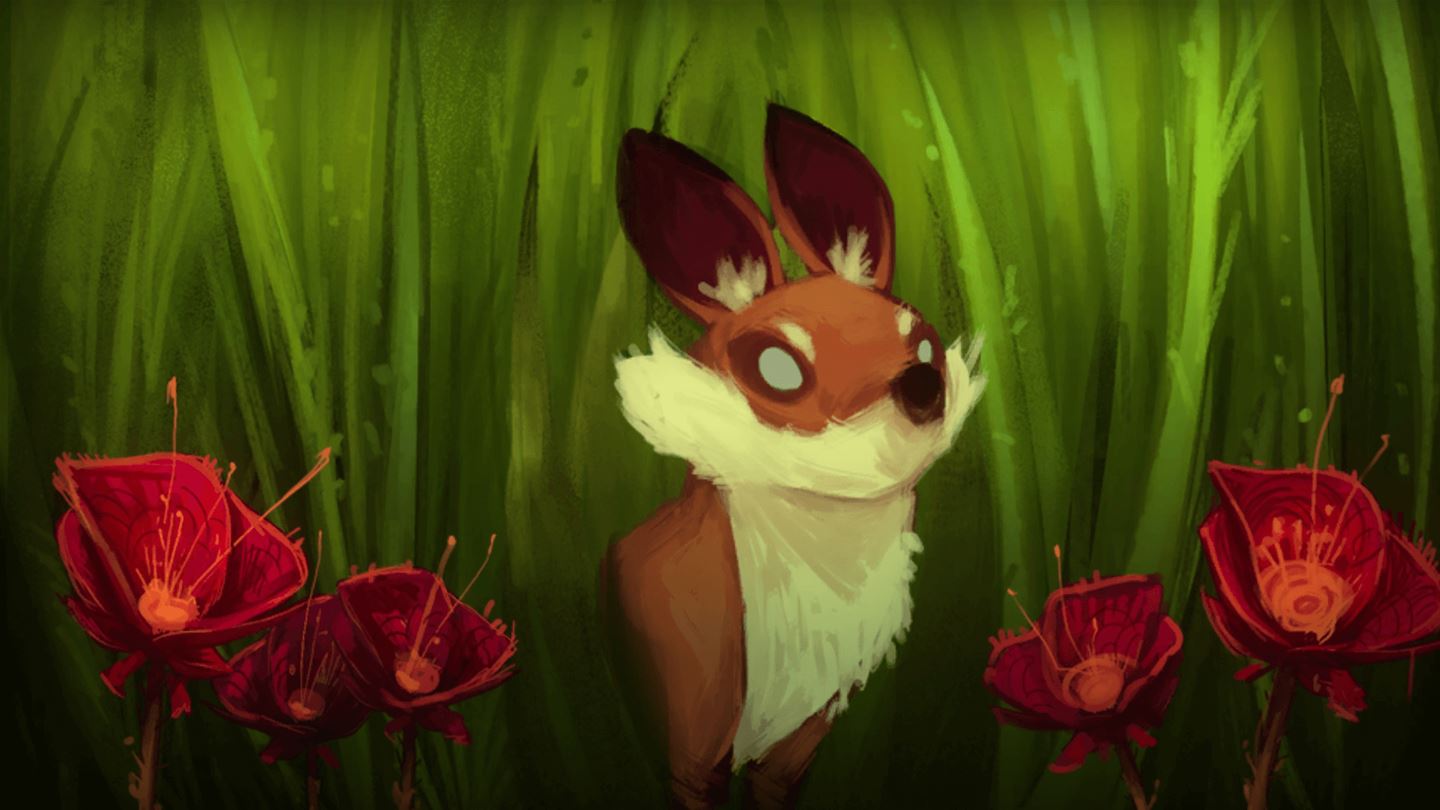 Living in Scotland, I know only too well the daily adventure called changeable weather. Now gamers throughout the world can also experience four seasons in one day thanks to Swing Swing Submarine’s Seasons After Fall. A 2D puzzle platformer with Metroidvania style elements, the game tasks you with exploring a land governed by magic and nature with the cutest little fox and his weather changing ability.

Despite appearances you actually take on the role of a “seed” of nature rather than the fox himself. The seed just happens to control the fox, though you do leave his body from time to time. Controlling the fox allows you to travel though the forest, earning the power to change seasons at the push of a button and eventually awakening the guardians of the forest. There’s no fighting and no dying but that doesn’t mean it’s a walk in the park. 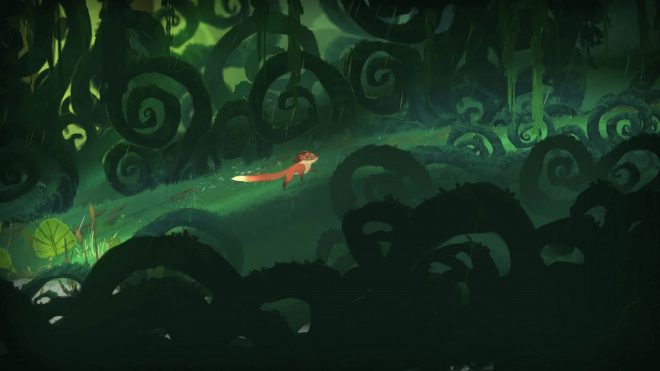 Natural Beauty – From the moment you turn the game on, Seasons After Fall is a visual and aural delight. With beautifully hand painted scenary and a fox so charmingly sweet, it’s likely that you’ll spend a good portion of the game just enjoying it’s swishy tail as he bounces between platforms. The artwork is intricately detailed and changing seasons is breathtaking as the scene instantly transformed as you switch between fall, winter, spring and summer bringing even more surprises and details. I especially enjoyed the crunching of the snow and the delicate tapping as you walk over ice. The animation is stunning, reminiscent of Ori and The Blind Forest and the voice acting is also well done. The game’s original score is both haunting yet uplifting as it almost narrates your journey, mainly thanks to it’s fantastic performance by a live string quartet. Hell, even the game’s main menu sounds great with little chiming noises as you scroll through them. As far as presentation goes, this game ticks all the boxes.

A change in weather– Luckily there’s also some great gameplay to back up all the beauty. The main game mechanic here is that we are given the ability to change the seasons as often as we want. This can be done quickly and easily by moving the right analogue stick to brings up a dial allowing you select which season you want. This also slows time down slightly meaning you can switch seasons mid jump if required. But let’s be honest, Seasons After Fall isn’t really about fast reflexes. There’s no combat to speak of and the platforming, while fun, isn’t much of a challenge. Even if you do mess up, a fall will rarely require a restart. This game is all about exploration and relaxing puzzles solved using your new nature controlling skills. Each change in season brings about a dramatic change to the environment letting you reach new areas or discover hidden locations. For example, branches will bloom in summer allowing you to walk along them or switching over to winter will turn rivers into ice that you can stand on and produces giant snowballs to let you reach new heights. It’s a fantastic hook and the developers managed to continue to surprise with it’s use throughout the game. 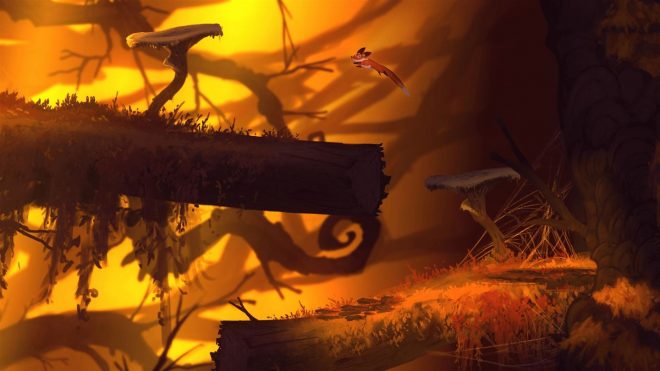 Backtracking Galore – A staple of Metrovania style games is repeating known areas but with new skills to access previously locked areas. As our little fox gains the ability to control each of the four seasons, so too does our backtracking commence. Except here it feels excessive. It doesn’t help that there’s no mini map to speak of so players must try to remember the way to each area with no direction from the game whatsoever. I mean even just a “left” or “right” would help before sending us off on a wild goose chase to find something. Exploring is also hampered by the fact that it’s difficult to tell the difference between each location, especially since it might have looked slightly different depending on which season you were locked on the last time you travelled through it. Sadly, I spent large portions of the game completely lost, searching for things that I had no idea what they looked like. There’s mystery, then there’s being obtuse.

Loading…times… – No one likes a loading bar but they’re usually a necessity in large games. However Seasons After Fall isn’t a particularly massive game, beautiful yes, but still simplistic. Yet the loading bar made far too many appearances and well outstayed it’s welcome especially for such a game. This became even more noticeable during the times I spend lost without? a map and I started dreading leaving an area of I wasn’t 100% sure I was going the right way, because it would mean another long loading time only to find out if need to turn back and do it all again. 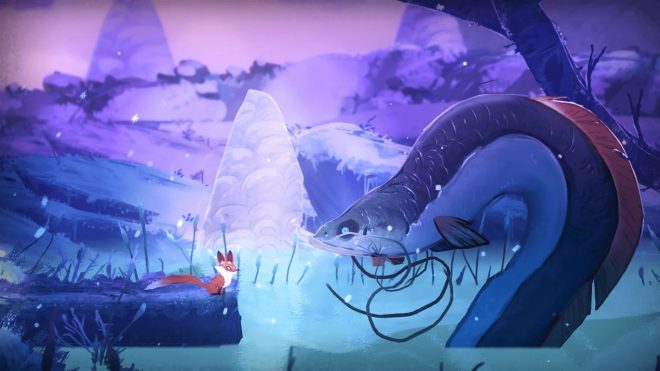 I wanted to like Seasons After Fall more than I did. I’ve gushed about it’s breathtaking beauty and the relaxed pace was a welcome change from the fast shooters we’re used to seeing. However the mysterious puzzles soon started to grate and the amount of backtracking was insane. The developers certainly show great potential, but unfortunately Seasons After Fall isn’t quite the sleeper hit I were hoping for.

Seasons After Fall was developed by Swing Swing Submarine and published by Focus Home Interactive on Xbox One. It was released on May 15 for $19.99. A copy was provided for review purposes.