Rock Band Blitz is an entertaining music game utilizing controller-based play. Touting 25 songs, Harmonix channels their popular PS2 game Frequency; players control all of the tracks in a song and use power-ups to accumulate stars and points. An interesting twist is earning multipliers for each track, and players must get the maximum number of multipliers on all tracks to raise their level cap.  Another way to gain points is to enter Blitz Mode. While hitting every note is impossible, hitting many of them in a row will put players into this mode, where they’ll start earning additional points for every tenth note hit. 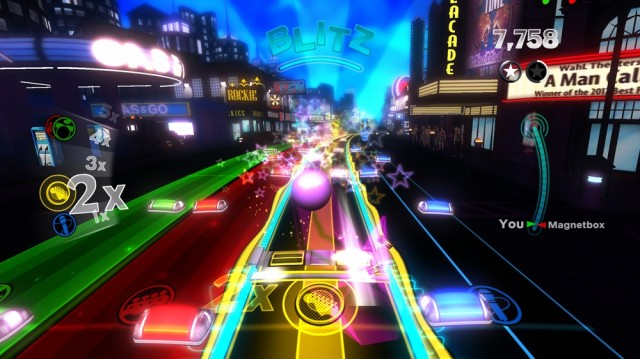 Large music library – With nearly 4,000 songs to choose from, Rock Band Blitz may be a game you play for a long time. All downloadable content from previous Rock Band games can be used right away. In addition to DLC, any previously exported Rock Band packs will be playable. The 25 songs that come with Blitz can also be exported to Rock Band 3. Sadly the on-disc Rock Band 3 songs cannot be used in Blitz.

Strategy-based points system – The points system is very similar those of past games, but there are a few new additions: Cred and coins. Cred acts as XP which unlocks different power-ups, increasing your points’ potential. There are three different categories of power-ups that can be used: Overdrive Power-ups, Note Power-ups, and Instrument Power-ups. These help you do a wide range of things such as: Earn double points on a certain instrument, have a firework blow up the notes in front of you so you don’t have to play, or have a track be played for you for a small amount of time. Coins are used to pay for the power-ups and the better you do in a given round. Sometimes earning coins can be a bit slow, but luckily Harmonix has added…

Facebook integration – In response to the lack of multiplayer, Harmonix offers the Rock Band World app, which provides players with a challenges as well as leaderboards to go up against both friends and other Rock Band Blitz players. In the feature called Score Wars, players will have the ability to challenge other players for coins. As stated above, coins can be crucial to attaining higher scores. In addition to Score Wars, you can also join fellow friends and fellow Rock Band World players to achieve community-wide goals for coins. For instance, you and four other players will need to attain 30 total stars on a Foo Fighters song. You can also attempt solo goals to achieve more points and helps the player maintain a high coin balance to spend on power-ups in game. Basic goals are smaller scale and can be completed with friends or by yourself. 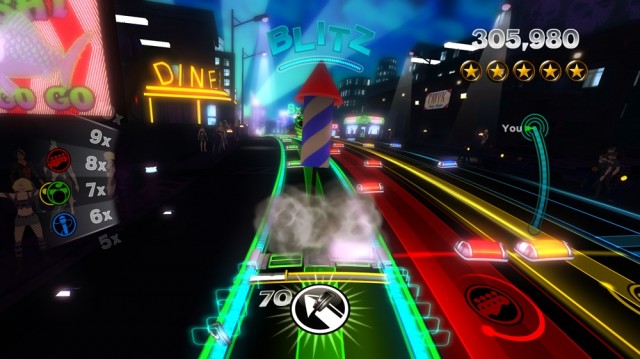 Learning curve – At first, many players may have a bit of an issue with learning the points system. Having to play all four or five instruments can be quite a daunting task. It helps to get out of the original Rock Band mindset and understand that the goal of the game is not to play all the notes, but to play the right notes to accumulate points. It also helps to know a given song well, so you know which track to focus.

Graphics – Rock Band Blitz‘s flashy and consistent graphics with constant moving surroundings are quite outstanding. That aside, the twists, turns, and hills that the tracks follow can sometimes leave you guessing what your next note will be. Most notably this problem appears in Blitz Mode where the game speeds up and reaction time is reduced.

Iffy default control scheme – Three different control schemes are available. The default setup utilizes the left and right joystick for notes and using the triggers to switch tracks. Using the joysticks for notes seemed rather sluggish, but switching the controls to using either the bumpers or triggers as notes and joysticks to switch track resulted in a better performance. 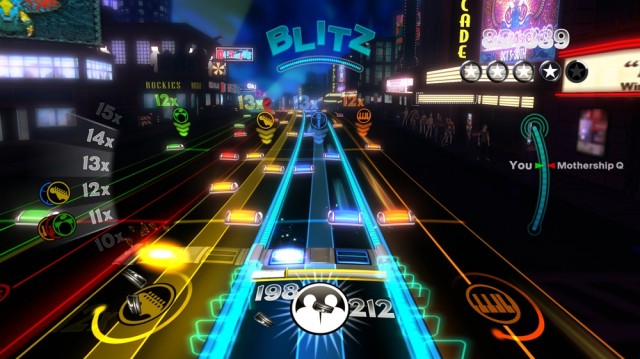 Rock Band Blitz is an extremely addictive and entertaining game. With the 25 songs included with the release and many more songs available to download from past games, it brings a refreshing boost to the music genre. At 1200 MSP, this game is an outstanding value for both old and new fans alike.