A little over 3 years ago, Poker Smash was released on Xbox Live Arcade. At first glance, one might write it off as just another generic match-three game. Sure, the game can be played by simply matching 3-of-a-kind, but the depth that Poker Smash brings to the action/puzzle genre is unlike any other game on the marketplace.  Inspired by the SNES cult hit; Tetris Attack, Poker Smash is truly one of the hardest puzzle games to master.  But the true beauty of the game is that any gamer of any skill level can find an enjoyable experience in Poker Smash. 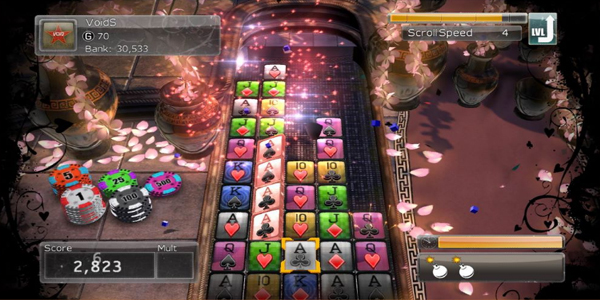 Addictive gameplay – The odd thing about Poker Smash is that there are multiple ways to become addicted. Beating high scores, chain scores and speed levels can all provoke that “just one more game” mentality. Aside from besting personal scores, making better poker hands can also addict players. Trying to figure out creative ways to make a royal flush without accidentally creating a 5 or 6 flush will really stretch a gamers thought process to a new high.

Incredible music – Poker Smash features 11 unique environments all with their own original theme songs. These aren’t your everyday run of the mill game themes, these are songs that will be stuck in your head for days at a time. They perfectly refresh the game every few minutes as they accompany background changes and they add to the addictive nature of the game. Hearing the next song is enough incentive to keep gamers desperately trying to stay in the game for a few more minutes.

Great controls – Dual stick controls in a action/puzzle game can sound like a potentially bad idea. But the controls in Poker Smash are incredibly intuitive for any gamer of any skills level. The slow down/speed up controls are mapped perfectly to the triggers and are very easy to understand keeping you in total control of all game mechanics at all times. Using bombs marks the only time the gamer will have to chose between which mechanic to control. But bombs stop the movement of the cards for 3 seconds, so there is really no risk in giving up control of the right thumb stick to quickly place a bomb.

Anyone can play – Poker Smash can be an enjoyable experience for anyone. The gameplay can be relaxing or intense depending on how each individual gamer chooses to play the game. Casual gamers can stick to matching three while pros will likely be working on their chain skills. This creates a wide variety of gameplay styles for the single player game, but multiplayer games should really be played between gamers of similar skill levels. Although anyone can pick up Poker Smash and effectively play the game, multiplayer matches are heavily geared towards rewarding consistent chain makers.

Puzzle mode – Puzzle mode in Poker Smash completely changes the way the game is played. If action or timed modes don’t grab your attention, puzzle mode can provide a whole new experience. With over 50 different puzzles lending multiple solutions, puzzle mode focuses on extreme thought over the extreme reflexes that other modes showcase. As an act of mercy, solutions for each puzzle can be found at the in-game store if they pose too much of a challenge. 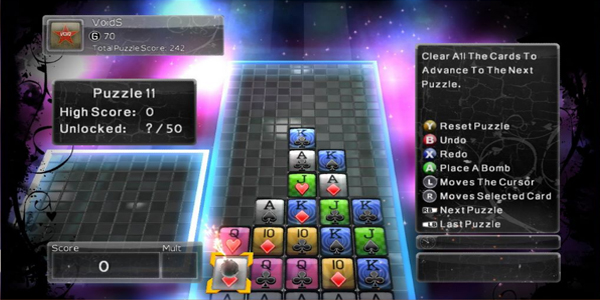 The rules of poker – The only real complaint about Poker Smash tends to come from the top-level players. Tetris Attack veterans won’t hesitate to claim that Poker Smash focuses on the rules of poker too much. Almost every chain can and will be broken by the fault of poker rules, not by the fault of the player. Full houses, straights and flushes are nearly impossible to predict causing epic runs of 2 straight minutes of chaining to be halted by the game recognizing a flush is a better hand than 3-of-a-kind. An option to turn off specific hands would have taken a unique element out of the game, but it would have also allowed Tetris Attack veterans to relive their glory days.

Poker Smash is one of the easiest games on the marketplace to recommend to a friend. It is very rare for a game to appeal to such a wide variety of gamers. It is easy for anyone to pick up and play, but it is brutally difficult to master. Countless hours of fun will ensue upon the purchase of Poker Smash.