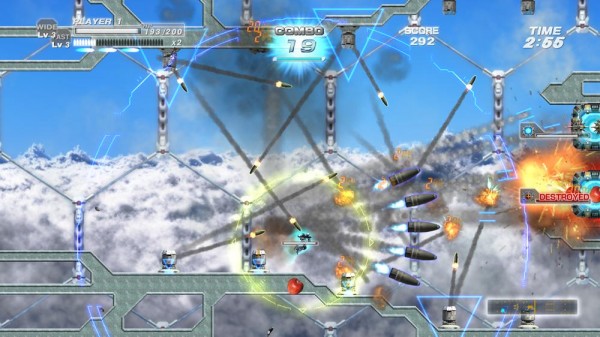 Amount of action – In Bangai-O, you control a mech armed with two weapons per level given one simple task: survive. The amount of action that takes place on screen in Bangai-O is absolutely insane. It’s not uncommon to literally have thousands of missiles and/or enemies on screen chasing you at any one time. There are times when there is so much on screen that it’s easy to get overwhelmed and lose track of what’s going on. Success in Bangai-O is measured by choosing the right strategy at any one moment and reacting quickly. You need to familiarize yourself with your abilities and get good at using them. If you don’t, you will quickly find yourself being obliterated by the sheer danger on screen. Seeing so much go on all at once is threatening, but also down right amazing. You can’t help but smile from time to time and ask yourself “how in God’s name did I just survive that?”

Gameplay variety- At the heart of the Bangai-O experience are the game’s levels. Bangai-O isn’t just an extremely hardcore shooter, it’s an extremely hardcore shooter with an endless amount of variety. While all the game’s levels are 2D, you’ll run into every shooter design approach you can think of, and dozens you can’t. Some levels have you simply flying through side scrolling, others have you moving vertically. Then there’s absolutely crazy levels that take place on a single screen and pit you against hundreds of enemies all at once. You can literally finish levels like this in thirty seconds or so, but on the flip side, its easy to die about three seconds in. These levels are often about quick reactions and finding the right strategical approach. Other levels have you avoiding enemies in a style similar to Geometry Wars as you slowly clear them out. Others have you fighting ants in an ant farm like design, while others have you rocket boosting into soccer balls which bounce off the walls and destroy enemies. That’s right, giant robots, ants, skulls and soccer balls all in the same game! This is only the tip of the ice berg. Bangai-O HD presents an amazing amount of gameplay variety for an arcade shooter. Not only is there a wide variety of approaches, but there’s also quite a bit of content here with enough levels to keep fans busy for a long, long time. Precision controls – Because of the amount of action on screen, Bangai-O would be a completely broken game if it didn’t control well. Thankfully, that’s not the case. While mastering the controls is definitely not easy, once you do you will find that you have the right tools to succeed. The game controls very smoothly, and the variety of weapons also makes the shooting element interesting and even a little forgiving. Some weapons will seek out targets in their general direction, and others have a ricochet effect meaning you don’t always have to place your shot perfectly to have it destroy an enemy. Overall the game controls very well but certain more advanced techniques such as freezing enemies really require some time and effort from the player to be able to utilize correctly.

Replays – One of the best “extra” features of Missile Fury is the ability to save replays of the level you just played. While you can only save your most recent replay, the addition of this feature is a good one. Since some of the action that takes place on screen just must be seen to be believed, why not save your replay to show off to any of your friends that are into shooters? Save both your greatest successes for the glory, and your epic failures for laughs. You can also view other players’ replays from the leaderboards which can help you with finding the right strategy for a level you just can’t figure out. The ability to watch and save replays is something more games need to utilize and its presence here in Bangai-O is definitely noteworthy. 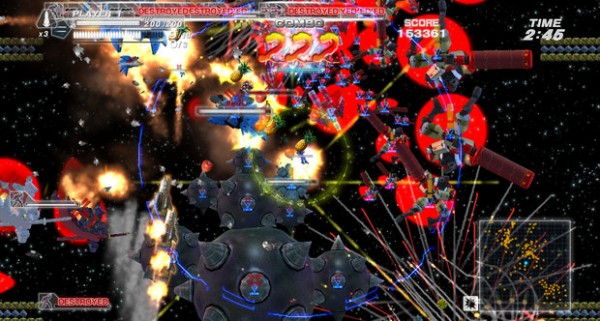 Difficulty – Terms often used to describe Bangai-O‘s gameplay include hectic, insane, and overwhelming for a reason. This game is hard. Really hard. As previously mentioned there are levels that are so difficult, you may not last longer than a few seconds before dying. There are also times when you will take time to clear out a plethora of enemies only to find a massive wave of enemies that come as a surprise at the end of the level who kill you in one shot forcing you to start from the beginning. While some will surely appreciate the challenge, it becomes very frustrating once you get into the real meat of the game and find yourself doing nothing but dying level after level. To alleviate this, the team at Treasure was wise enough to unlock the next level for you after failing three times on a given level. While this is certainly appreciated and allows you to progress despite constant failure, it builds up and becomes frustrating. This game is the definition of hardcore. Players who aren’t extremely versed in arcade shooters will find that the game’s difficulty is a barrier that may prevent them from enjoying the game.

Red filter of death – In addition to the difficulty by design, Bangai-O has what some call the “red filter of death”. This is a trend in the gaming industry that can become intrusive to gameplay. When you start to get low on health, the edges of the screen become red and blurry to notify the player that they are nearing death. The problem here is all the action taking place on screen requires you to be on your toes and react quickly. When part of your screen is obscured by a red filter it makes it hard to see what’s going on and you’re even more likely to die. The last thing this game needs is additional unnecessary difficulty added on top of it. Bangai-O is not the only game that has this problem, but it is a design flaw nonetheless.

Map editor complexity – In concept, the addition of a map editor to any game is a great addition. It allows fans of the game to be creative and bring their own ideas to life. Bangai-O‘s map editor however is so complex that it’s hard to use. The control scheme for the map editor seems to have been made on another planet where the beings have more than two hands and ten fingers. If you really want to sit down and spend huge amounts of time to craft and play your own Bangai-O level, Missile Fury allows you to do that. Just be prepared to spend as much as, if not more time trying to figure out the controls on your way to doing it. 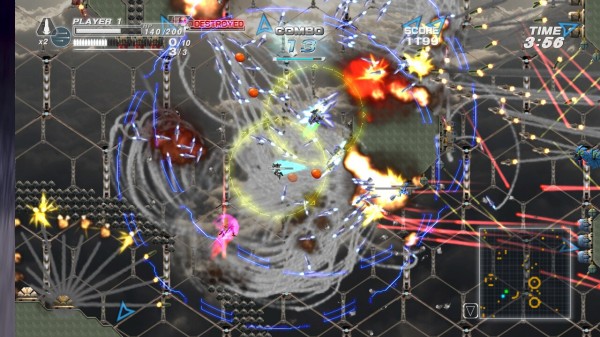 There’s no doubt that Bangai-O: Missile Fury will hit the spot for hardcore fans. Those new to arcade shooters or even those who have dabbled in some of Treasure’s other shooters however may find that this game is just so intense that it’s difficult to get into. What Treasure has designed is great; It’s a game with good variety, precise controls, and a ton of content. But when take the Bangai-O plunge, you have to come prepared for a very steep learning curve and sometimes impractical difficulty that can be enough to make you put your controller down for good before you even have a chance to dive into many of the game’s features and content. If you’re a fan of Treasure’s other efforts and arcade shooters in general by all means, dive in. If you’re not familiar with the genre however, we highly recommend that you give the game a try and do some research before paying the price of admission. While Bangai-O HD: Missile Fury is without a doubt a a good shooter, it is certainly not for everyone.

Bangai-O HD: Missile Fury could roughly be called a twin stick shooter. But it is much more than that simple label can describe. It’s very different from any other game out there. Much of the game feels unintuitive mainly because it is so unfamiliar. The counter system is simple enough, but when is the best time to use it? Which weapons are best used in what situations? These are questions the game largely leaves for the player to answer. This leads to frustration and confusion. If you can get past the mechanics of the game you will find an extremely solid game that is very rewarding. But only those who click with the game will really enjoy it. The rest will be left scratching their heads. Everyone should try it out and if you aren’t impressed with the demo walk away and know the game wasn’t for you.