Cruise control – Renegade Ops is one of those games that controls exactly as you expect it to. After 30 seconds of driving your chosen vehicle you’ll be making tight turns with ease and doing donuts just because you can. The vast majority of your time in the game will be spent driving around but it never becomes a chore because it’s just so satisfying. While each character controls pretty much the same there are some slight differences in their vehicles handling, nothing that requires too much adjustment though.

Constant gratification – If blowing stuff up doesn’t completely do it for you then don’t worry, Renegade Ops has plenty of other ways to make you happy. Namely its leveling and upgrade system. Which you progress by, funnily enough, blowing stuff up. As you take out the bad guys you’ll earn experience, when you gain enough you’ll level up. Every time you level up you unlock upgrade points, you then use these to unlock various upgrades for your chosen character. There are three different types of upgrade, defense, offense and tactical. Defensive upgrades are mostly related to your health, offensive to bolstering your secondary weapons and tactical augments your special ability. There are 18 upgrades in total for each character (most of the defense and offense upgrades are shared) but you can initially only carry three. This means you have to put some thought not only into which upgrades to unlock but which to take with you into a mission. It also allows you to mold your character to fit your play style, which is especially useful when playing with others. 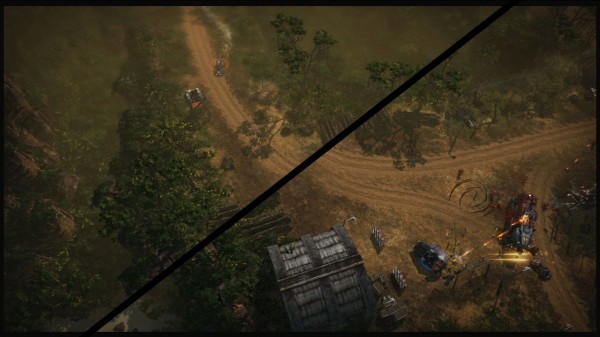 Made for co-op – Renegade Ops entire campaign can be played cooperatively with up to four players over Xbox Live (there’s also two player splitscreen). A lot of the missions throughout the game have clearly been designed with this in mind. Secondary objectives are often scattered all over the map, allowing players to split up and clear them faster than you would be able to on your own. It creates a great co-op dynamic as everyone works together, but separately, to complete a bigger goal. The different special abilities also compliment each other really well, Diz’s EMP for example can be used to take out enemies weapons while Gunnar uses his heavy gun to wipe them out. Or Armand can use his shield to get in amongst a group enemies and distract them while Roxy does a hit and run air strike on them.

Explosive scoring – Once you’ve played through Renegade Ops‘ five or six hour campaign there’s plenty of reason to go back and play again. First off is leaderboards, as you kill enemies you rank up a damage streak. It’s essentially a multiplier and if you stop attacking enemies it’ll tick down. As we cleared an area we often began to panic as we rushed to find more enemies to keep that precious meter filled. Leaderboards are also very smartly implemented to keep you aware of who you have to beat. You’ll see them when you select a stage and you’ll even get notified mid-level if you beat one of your friends score.

Michael Bay’s M.A.S.K. – Renegade Ops comes from an alternate universe where Michael Bay made your favorite Saturday morning cartoon. The story is presented in a minimally animated comic book style, it looks great and while the designs are somewhat derivative they are full of character. It’s the writing and voice acting where this aspect of the game really shines though, with suitably over the top performances and ridiculous dialogue. It’s a zany, albeit occasionally dark, tale of a supervillian’s attempt to rule the world and we love it. 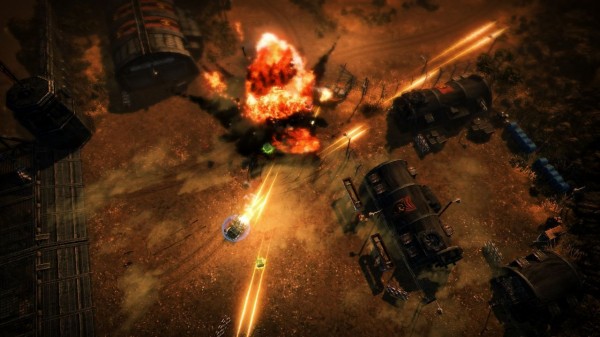 Occasional technical hitches – We experienced a few bugs and glitches during out playthrough, one recurring problem saw the game lock up for a split second. It isn’t game breaking by any means but it is off putting and had us wondering if our Xbox was not long for this world. Another error came after a background download finished  as we completed a level, which caused the  text from end of mission screen to be super imposed on the main menu which we had also been booted back to. None of the problems we ran into hindered our experience too much but they are signs the game could’ve used just a little more polish.

Counter-intuitive co-op – For a game that is clearly designed to be played co-op Renegade Ops has an unfortunate way of dealing with death in a co-op game. If a player loses all their lives then they are out of the current mission, all they can do is spectate the rest of the level or quit. So if you are unlucky enough to lose all your lives three minutes into a game you’ll have nothing to do but wait for your buddies to finish. The problem is made even more prominent by the fact the hardest difficulty limits your lives to three. If you’ve got more than two players you’d ideally want to be on that difficulty setting but it will also mean risking frustration. We’d have loved to see one of the unlockable abilities allow players to revive their co-op buddies, or any other kind of mechanic that avoided the co-op situation the game currently has. 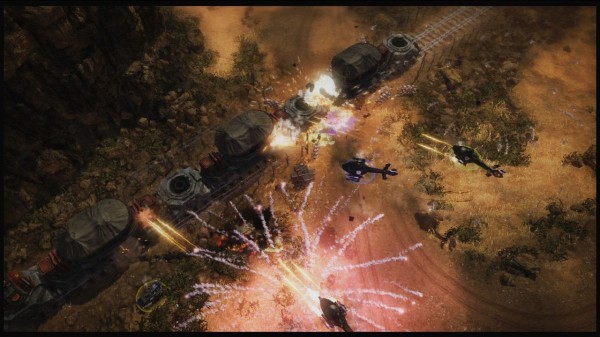 There were a couple of other little niggles, such as the uninspired mini-game when infiltrating  buildings, which consists of mashing the A button as quickly as possible. We also wish there were more special vehicles, the brief helicopter sections were a nice change of pace and we’d have liked to see more. These are small complaints though and don’t take away from the most important aspect of Renegade Ops, it’s a whole lot of fun.

The combat offers so many options that taking down enemies will take a long time to become dull. You’ll get hours of enjoyment riding around blowing stuff up with your buddies or playing on your own to beat their high score.