Radiant Silvergun was developed by Treasure. It was released September 14, 2011 and retails for 1200 MSP. A copy of the game was provided for review purposes. 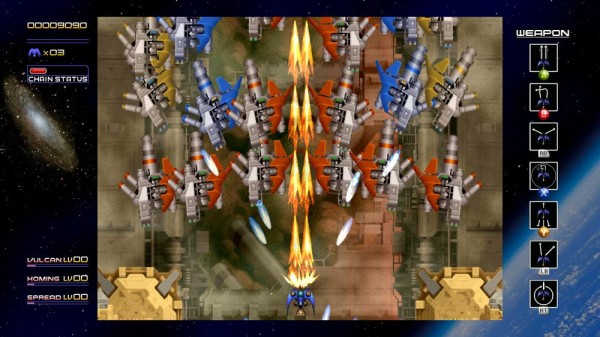 Way back in 1998 a little game called Radiant Silvergun was released in Japanese arcades. Shortly thereafter it was ported to the Sega Saturn, but again only in Japan. But a funny thing happened that really doesn’t happen all that often. Somehow through word of mouth and game magazine hype this little game developed a following in the rest of the world. People started importing the game so they could play it. The only problem was that RSG was a limited release even by Japanese standards. Prices skyrocketed. Even today a copy for the Saturn could fetch between $150 – $200. Out of the reach of most gamers, this game continued to have great word of mouth for the last decade. It was, in truth, one of the most popular games that no one had ever played. But that is all behind us now. Finally the rest of the world gets to see what Radiant Silvergun is all about.

Updated visuals – It only takes one look at the original graphics (which are included in this package) to see how much improved they are. Everything has been re-textured in HD and looks great. The colors are bright and all the enemies look crisp and defined. Rumor has it that Microsoft approached Treasure some time ago about bringing RSG to XBLA. Treasure is said to have told them that the graphics have not aged well and it would be too much work to update them. We are much indebted to Microsoft for insisting because the updated graphics are beautiful.

Finally available – OK it is confession time. I was one of those people who spent big bucks to import this game years ago. Having owned it, played it, loved it, and later sold it I can say that it is wonderful to finally have it available so easily (and cheaply). But it is even better that the average gamer finally has a crack at this classic title. And an added benefit is the internet age we now live in. Online multiplayer and leaderboards with downloadable videos make this version better than the original ever could have dreamed of being. 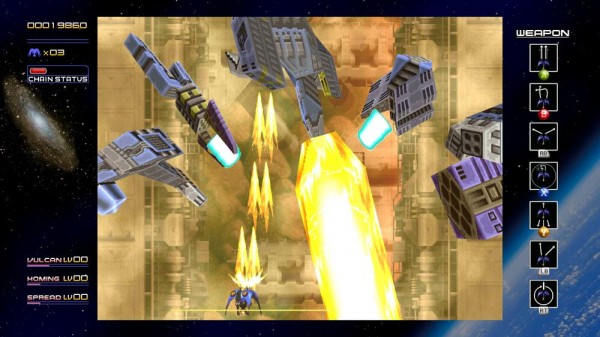 Puzzle-em up – There was no shortage of quality shooters for the Saturn. Why does this title so stand out? The answer is its unique chaining and scoring system. Essentially there are three different colors of enemies: red, blue, and yellow. The basic goal is to chain groups of three enemies of the same color to raise your multiplier and score big points. The original chaining system is fairly restrictive if you adhere to it. It actually forces you to avoid destroying certain enemies which is a paradoxical action in a genre such as this. There is also a new scoring system based on RSG’s little cousin Ikaruga. This chaining system only requires you to chain groups of three of the same color, but all colors are fair game. It doesn’t require a lot of the original strategy. This is great for beginners and for veteran’s looking for something new.

Weapons – There are a total of seven different weapons at your disposal right from the beginning. They all have their place although beginners will likely rely largely on the standard Vulcan shot. Learning to use the right weapon in the right place can make things a lot easier. It can feel overwhelming at first, but you will learn that every weapon has its place. Having each weapon available from the start really kick starts the action as well.

Classic Saturn anime – A minor point but important nonetheless. The Saturn version contained an anime introduction and ending that wasn’t in the arcade version. These videos really establish the story, and they are finally subtitled in English so we know what’s going on! A lot of people wanted these in the XBLA version and Treasure listened. That’s awesome.

Story and Arcade modes – Arcade mode plays much like you would expect. You have lives, you have continues, when you run out its game over. For every hour you spend playing arcade mode you get an additional continue. Story mode is a completely different animal though. This was originally called Saturn mode back in the day if anyone was wondering. In this mode you have no continues and start with only three lives. For each hour spent playing story mode you receive an extra life. The difference is that each time you play story mode you are powering up your three main weapons. They all start at level one and can go to level 35. Having the powered up weapons completely changes gameplay and makes up for the lack of lives. First generation polygons – It seems likely that people will be quick to compare RSG with Ikaruga. It can stand up to almost any test, but graphically it will never be able to compete. As good as the HD graphics are, it doesn’t change the fact that many of the bosses and larger enemies are comprised of loose first generation polygons. Nostalgic to be sure this look has not aged well. Those willing to see past the antiquated look will certainly find a great game. But folks expecting something to rival Ikaruga will be disappointed. Remember, RSG was released well before Ikaruga was even conceived.

Lack of clarity – The chaining/scoring system is complex even at its most basic levels. Beyond that there is a host of other scoring options available to the advanced player. Unfortunately this version of RSG takes almost no pains to explain any of that to you. Moreover, it never once explains the difference between original and Ikaruga style scoring which is brand new to the whole world. Experienced players will be able to discern the difference, but beginners may never be able to tell. With the internet there will never be an inability to find the information you need. But it is ridiculous to explain so little about a game that offers so much.

Overly demanding gameplay – With enough time invested story mode is conquerable. But arcade mode may prove insurmountable without infinite continues. The reason lies in the scoring system. Most shooters have a scoring system and masters will work to achieve the highest score possible. But for those that simply wish to play for survival they can completely ignore all of the more technical scoring techniques. But in RSG this isn’t a valid option. Basically you start the game with all of your weapons at level 1. The goal is to power them up a quickly as possible by scoring as many points as possible. If your weapons are too low of a level later bosses will be all but impossible to defeat. So anyone who is serious about beating RSG is forced to play the chain game whether they like it or not. As good as everything in this game is, it is a real weakness to essentially force players to play a certain way.

Lack of proper 4:3 support – This will be a nitpick to some but serious business to others. As it stands there is no good option for displaying this game on a standard definition 4:3 television. On a widescreen TV there is no problem but on a standard the play field will be extremely truncated and for many, feel unplayable. This has happened before with other shooters and fans have raised such a fuss about it that there seems to always be an eventual patch to allow it. But presently standard def users need to beware. What is particularly odd is that RSG displays natively in 4:3. It has been forced into 16:9 at the expense of the original and many fans. Bizarre. 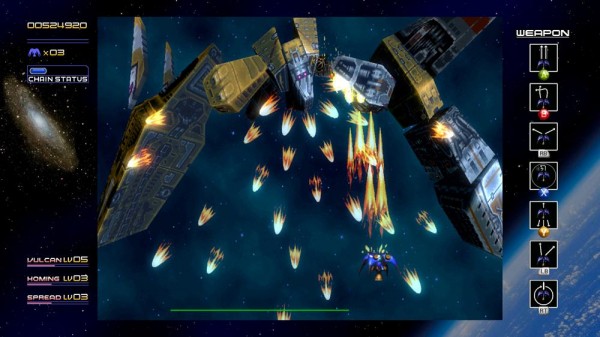 Radiant Silvergun is a wonderful game. The hype is real, the stories are true. Anyone interested can purchase it at about a 95% discount over what others have been paying for the past 13 or so years. The problem is that it is a wonderful game for the right kind of enthusiast. Shooting fans have been salivating at the prospect of getting this game on XBLA for some time. They have already downloaded it and posted ridiculous scores. It’s the causal fan that needs guidance here, and for them this game is something of a mixed bag. It has intense action, steep challenge, and very satisfying mechanics. But being forced to play a technical game plan will be a turnoff for most.

On top of that, it will be a serious time investment to eventually get to infinite continues so you can simply see everything in the game. Credit feeding isn’t the ideal, but if you are going to pay 1200 MSP for a game you might as well be able to see all of it if you want to. After all the Saturn version had infinite continues right from the start. All this is to say that you should download the demo and play it for yourself. See if there is something in it that you like. If so you will not be disappointed in your investment. But if it doesn’t grab you, don’t feel you need to like this game because of all the hype.

Throughout gamer magazine culture, this game would be listed as both a game from the East we never saw here and one of the greatest shoot ’em ups Treasure has ever made. The game has a great sense of style (even if it’s pretty silly in the Story Mode) and the amount of weapons at your disposal feels great and the music sounds rocking. This is a wonderful shmup but for 1200 MSP, it’s a bit of a pill to swallow for this when Ikaruga is 800 MSP and might be easier for first-timers. If you’re a long-time fan of this style of gameplay, there’s no question in your mind that you’ve already gotten it. But for you beginners to the foray, make sure you try it out before you buy it to make sure the game is right for you.