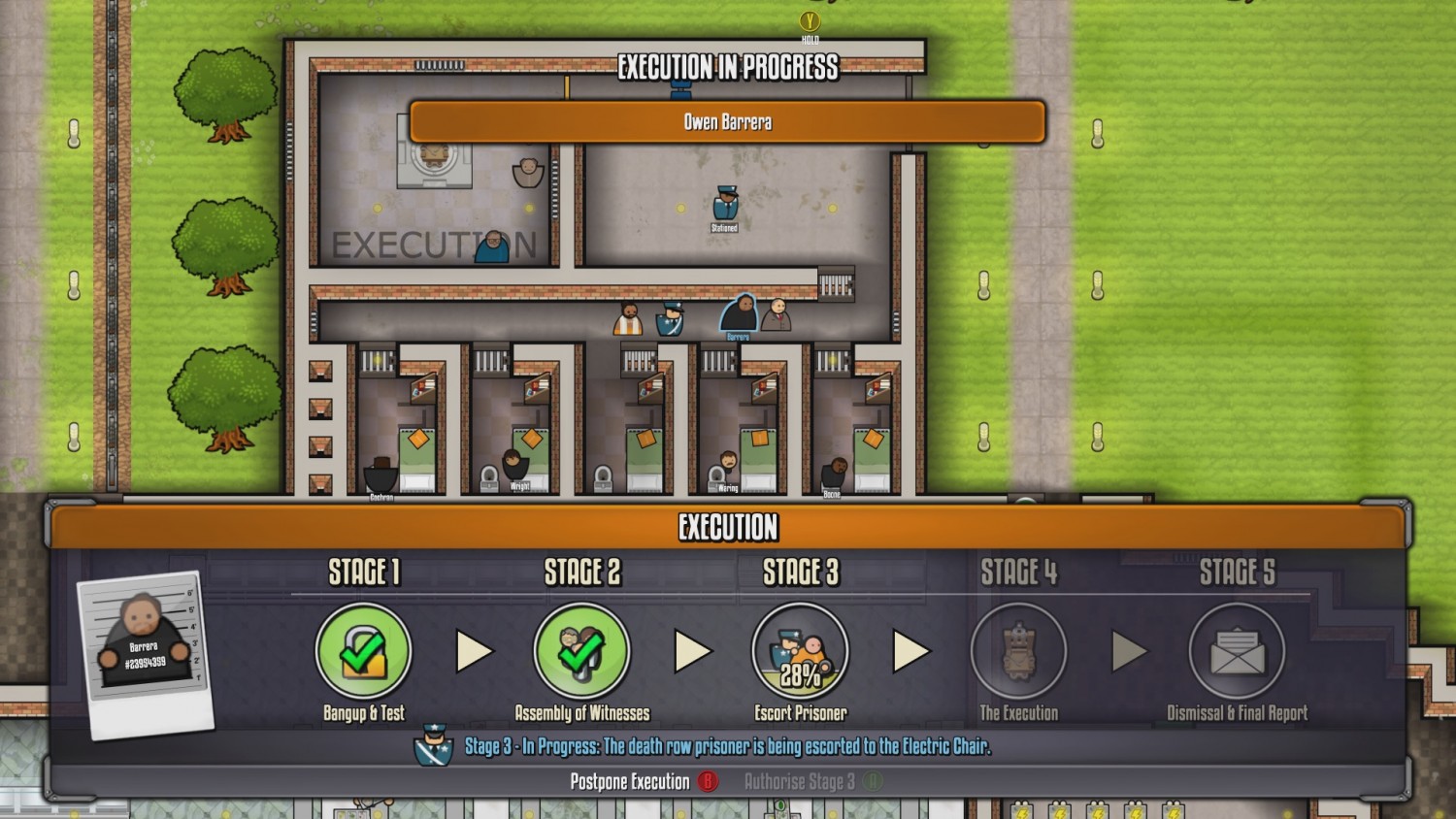 XBLA Fans recently had the opportunity to speak with Double Eleven about the Xbox One version of Prison Architect.

XF: Prison Architect has sold incredibly well on PC, but many console players may not be familiar with it. Could you briefly explain the general concept behind the game? 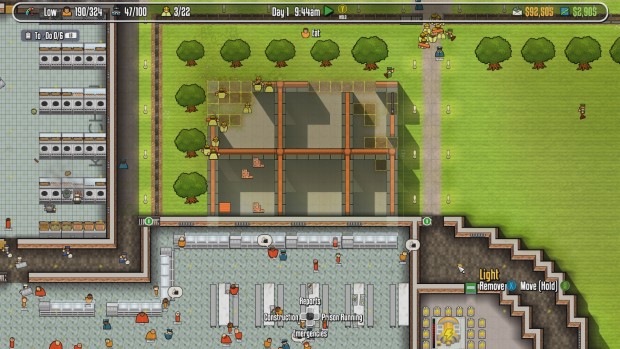 DE: Prison Architect: Xbox One Edition is the world’s biggest lock-em-up, as we call it, where you control and manage the fate of your inmates. How you go about doing that, and the prison you build is entirely down to you. You can design a prison which promotes social order and a peaceful coexistence amongst inmates, offering rehabilitation and plenty of free time or create a brutal supermax that disregards human rights and imposes strict punishment, [h]as armed guards patrolling every corridor. You’ll see the impact of your grand design on the lives of your inmates, but of course even when all of your prisoner’s needs are met, unlike other games ultimately it’s still a prison and no one really wants to be there.

The game also features Prison Stories (our campaign mode), World of Wardens, where players can share their creations online, and Warden mode, allowing players to take immediate control of a pre-built prison, made by our designers and the very best of fan creations.

XF: What’s your favorite aspect of Prison Architect? Was there a moment when playing the game that stood out for you as super memorable? 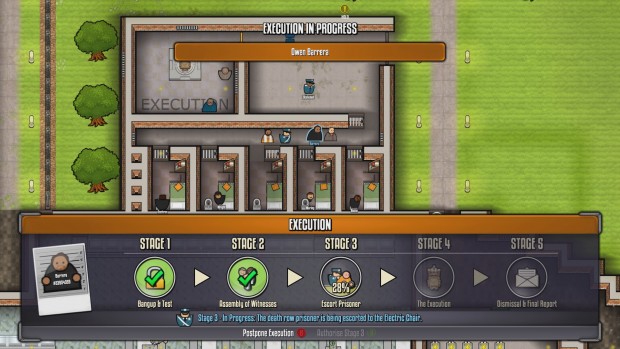 DE: I think I enjoy the death row and execution process the most, but for reasons you might not expect. In the game you really have to think about what you’re doing and there can serious consequences for making the wrong call. Aside from constructing an electric chair and assembling the witnesses, you must also prove to yourself that the inmate is guilty, and even then you may never be fully sure. And then there’s the fact that you’ve developed a kind of bond with all your inmates, versus the reality that there’s a job to do.

We’ve presented the player with a way to deal with this moral dilemma and I find it very engaging and honestly sometimes get a bit of a lump in my throat. The first Prison Story in the game will take players through that experience.

I also like the Needs System. I’m a nice Warden, mostly, so I play my game’s in accordance with the prisoner’s needs, attempting to facilitate whatever they want, from an inmate shop to visitation rights. Once you’ve researched Psychology you’ll be able to look into the minds of the prisoners and it’s pretty cool to see how they’re feeling about pretty much everything, throughout each day.

XF: Prison Architect fits into a unique space on consoles. There aren’t as many simulation and building games on console as PC. Do you think of this as a strength or a weakness for the Xbox version of Prison Architect? DE: I think you said it exactly right, from a genre perspective it certainly sits in it’s own space on console so we see it as an opportunity. Our hope is that people can see the broader thematic areas of the game; while at its heart it and early on it is construction game, equally as a player you’re responsible for the life and wellbeing of your prisoners as they have their own minds. PA gives people all the stuff they need to explore how they would build and run a prison and see the outcome of that play out on the prisoners. So I think it’s really cool that you can run a Prison and treat your inmates any way you want to and see what happens. On those merits alone I think it’s worth checking out, and fortunately I don’t think it would work very well as an FPS :) So we are offering something different and I hope that opens up the space even further for more dissimilar titles.

XF: What have you done to make sure Prison Architect feels at home on console and less like PC port. Are there any specific hurdles you ran into with this game that you had to solve that players would find interesting?

DE: I don’t think we were under any illusion when we began, if we wanted to maintain the original game’s 90% rating it wasn’t going to come from mapping the mouse pointer to the analog stick and then job done. This game really began when we pitched our concept for Prison Architect to the original developers, Introversion Software. So we broke the game into its constituent parts, decided what was core and what needed reworking for it’s new new home. While there were many areas we’ve changed or updated, top of the list was controls and user experience.

There’s a certain immediacy people expect from picking up a pad and as a gamer, when playing a new game you start with what you know; which button to shoot, accelerate, use or jump. In Prison Architect, these things of course don’t exist so this was going to be critical for us to get right. We’re going to have to design a new control system for the game and then teach that to the players in a way that feels as intuitive and natural as playing any good quality console title with more standard inputs.

Our new control system was based around providing access to a new, heavily streamlined menu system that had to work for all the things you could do in the game. The PC game is a heavily mouse driven experience, so one of the biggest challenges was maintaining that immediate feel of being able to build, buy, do whatever you want quickly, but with a lightweight and attractive HUD, which retains as much screen real-estate as possible.

We started this on paper first, with disconnected controllers in our hands, playing it through in our minds before prototyping anything. We believe what we have created helps ensure that players can do what they want, when they want, more quickly and also help inspire players to build or do things to their prison they may not have thought about previously. 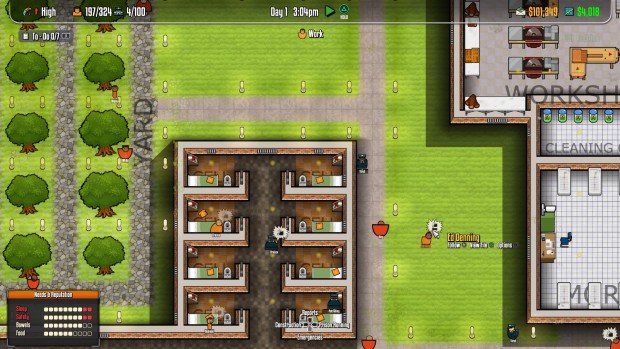 XF: Prison Architect appears to be receiving frequent balance tweak and updates. How will updates be handled across the consoles versions? Is there an anticipated lag period? Will the PS4, Xbox 360 and Xbox One version be identical content wise?

DE: So we’re very aware that the PC game has over 30 updates in the past 5 years, making it what it is today. We are creating our own edition of PA and introducing it to a different audience, over a different time period. Although the versions mainly play the same, we’ve made hundreds of tweaks and improvements big and small to our console editions so we see them as different all together. Our plan is to continue to support the game with features and updates right for the game and the community, not necessarily everything that goes into the PC edition. We’ll look at prioritising what the console fans desire the most. Content wise, on launch all the consoles will be the same as each other.

XF: I’m paraphrasing this, but in a developer blog on Introversions website, they stated Double 11 did a better job in a week at a console interface then Introversion would ever have achieved. What in your background as a studio, without being too humble, do you attribute your success on this to?

DE: We have a pretty unique position in the industry in that we are the ones that go out and find the games and developers we want to work with. It’s for that reason we’re only looking at titles we think are great and that we know our studio can knock out of the park! Every project we’ve undertaken is personal to us and hopefully that shows through the titles we’ve worked on across a number of genres. Keeping that in mind, enter Prison Architect with awesome core game systems in place for building and managing a prison but needing our team’s skillset to work on a number of areas with the biggest being its interface to the player.

As a designer I’ve been studying or working on user interfaces for almost two decades so when I saw that blog post, as a backer and fan of the original PC game it meant a lot! A good interface isn’t just about controls and a new look, it’s equally to do with controlling how and when you present information and choices to the player in a way that’s efficient and makes sense. It’s a way to guide early players, and inspire those who become familiar with the game. We spent months working out an interface so when it came time to start creating it in the game it, thanks to our kick-ass team it came together really quickly. 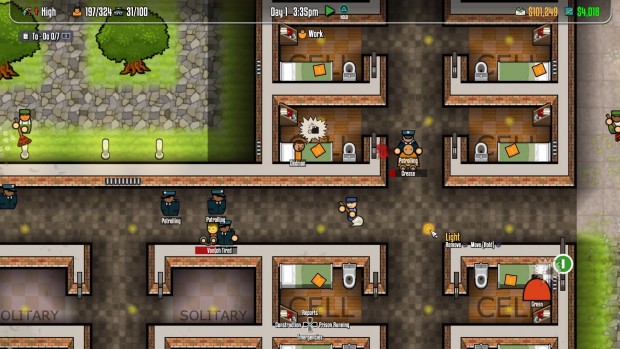 XF: Double 11 as a studio has done console ports for a lot of successful game titles. What’s the hardest part of translating someone else’s vision to a new platform? Is there a dream property you have always wanted to work on?

DE: Believe it or not Prison Architect is a dream project for me. I was hooked in after seeing the game for the first time on PC at a Rezzed in the UK a few years back, it was such a cool idea. I became a backer of the game on PC, playing it a lot, watching it’s success, and eagerly anticipating the next new features that Introversion would reveal in their monthly YouTube dev diaries. It’s my kind of game and I loved the old Bullfrog games, so I tell people it is a real “project of passion”, and I do mean that.

Undoubtedly, the most challenging aspects of bringing a PC game over to console is introducing that “Console Feel” as we call it, which encompasses many elements. Console and PC audiences have distinct differences and it’s not just about adding a sexy new front end, we need to look at how they value the features, and provide better messaging, adapt the controls, provide in-game guidance (as opposed to having to look online), and a provide a more intuitive user experience. 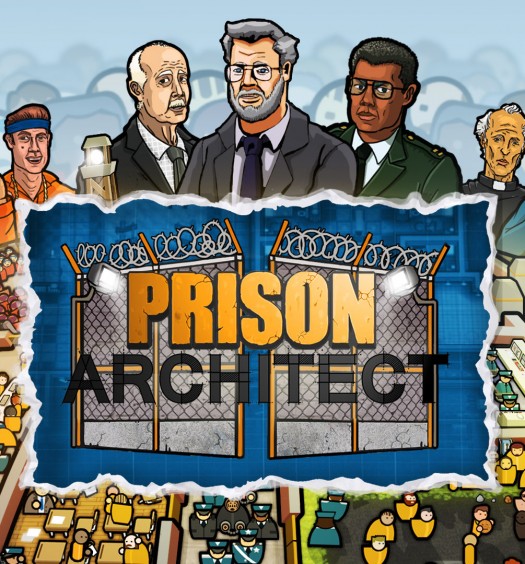 Prison Architect will let Xbox owners build and manage a prison this spring... 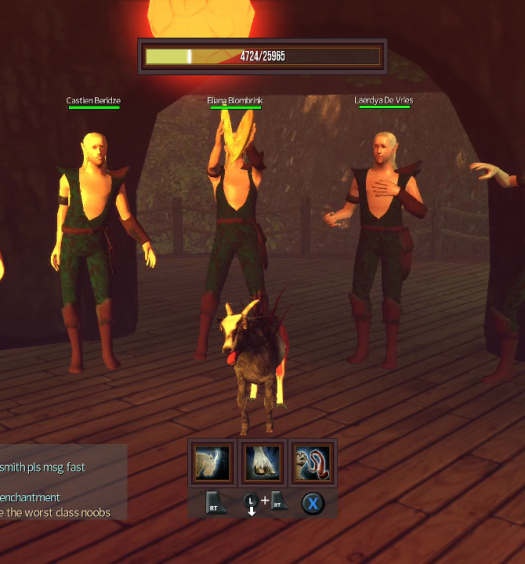