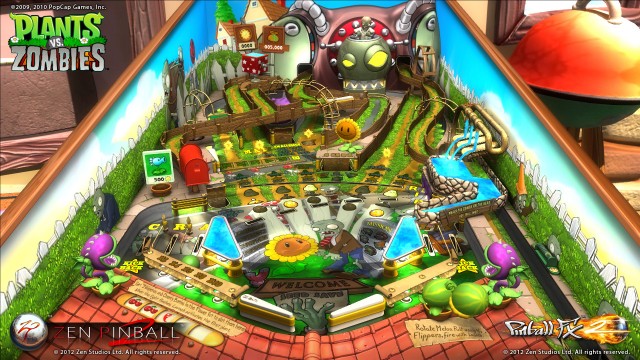 Beautiful table – Simply looking at the pictures should convince you that the table is beautiful and well animated. The colors are perfect and really capture the feel of Plants vs. Zombies. Everything about it looks great, which we have come to expect from Zen Studios.

Zombie hordes – The zombies that constantly attack you are probably the most interesting aspect of the table. They come from different angles that more or less correlate to the different ramps. They are destroyed by shooting them with the pinball. They really add a lot to the table especially when their are multiple zombies onscreen.

Inventive missions – The missions on this table are not easy. But they are interesting. They all center around fending off various zombie attacks. Interestingly some missions utilize animated zombies while others utilize zombie cut outs that could actually be part of a real table. It is refreshing to see some more traditional ideas being used again. 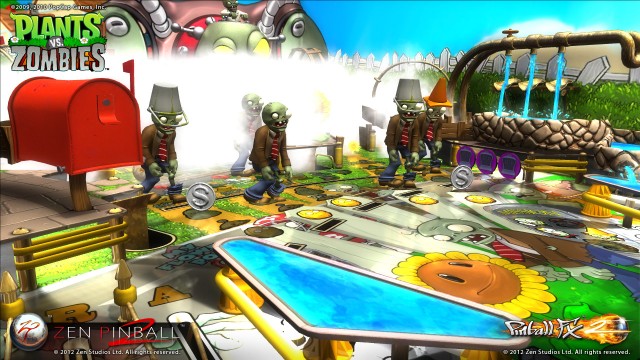 Poor pace – The pace to make any progression is so slow. It is incredibly frustrating to try to do anything on this table. The table really is not difficult. But it is exceedingly difficult to try to accomplish anything intentionally here. This table really seems designed for kids who just want to hit the pinball randomly. In fact we found that randomly hitting the ball seemed to get us higher scores at a  faster pace. The main reason the pace is so slow is the poor layout of the table.

Bad layout – Any table generally has some means of passing the pinball from one flipper to the other. The usual means is to hit a specific ramp that dumps the ball safely on the other side. This table has such a ramp. The only problem is that half the time the mailbox on the ramp stores the ball and then a new ball is shot out on the other side of the table completely killing what you were trying to accomplish. Those balls are being stored for a three ball multiball that is so easy to activate you will feel like you spend more time in multiball then in a regular mode. This gets old really quick, especially because there are not really big points to be had in this mode. The best part is that when multiball gets activated it resets whatever else you are trying to do like buying an upgrade. It is very annoying.

Lack of clarity – The instructions are really lacking. How to activate the different missions is a mystery. We had more success activating them randomly. There have been times when we complained the tables are not well explained but this is a primary offender. 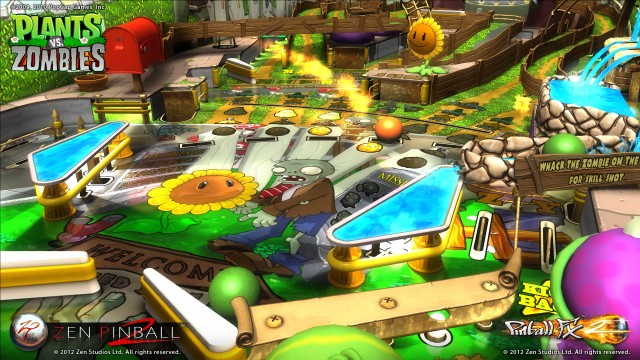 Plants vs. Zombies for Pinball FX 2 is not a complete failure and should not be viewed as such. It is a competent game of pinball. Die hard fans will want to get it to increase their wizard scores and add to their collections. But there is no reason a newcomer should buy this table, even if they are a fan of the source material. To best put it into perspective, I seriously considered intentionally letting my extra balls drain just so that I could stop playing. This table is a miss, but it doesn’t tarnish the overall reputation of Pinball FX 2 in our opinion.