With PAX East now behind us, a lot of attendees are probably reflecting on what a great experience this past weekend was. You’ve heard our thoughts and initial impressions on our three daily podcasts we recorded while in Boston and you have likely read a write up or two on a game that we covered while we were there. But let me tell you about some of the finer points on the PAX East experience that might not be covered on many media sites. These are the unexpected heroes of a PAX experience that truly make it an unforgettable weekend.

The people – You might not realize it because most people attend PAX with the mindset of “I can’t wait to see X game” but the people of PAX are by far the most amazing feature. Imagine an Xbox LIVE filled with only those you would submit a good player review for and you have a general understanding of the PAX community. You can walk right up to Cliffy B, Morgan Webb or Major Nelson and talk to them like you would any other person at the show. Everyone is there to check out some awesome games and talk to some awesome people. Attendees are social and generally interested in the same things as you are. How often do you find yourself in a situation like that as a gamer?

It’s a great way to meet new people as you wait in lines for various events, or meet people you look up to as they are generally walking the floor just like you, and even meet people you have only exchanged with in online interactions before. I even got to meet a few of the team members for the first time (Perry offers hugs below). Twitter was a great tool for me personally to track down some online friends and finally get a chance to meet them. So thanks to all that engaged with either the XBLA Fans account or my personal one making my experience that much better as I finally got a chance to associate a face with your online handles. 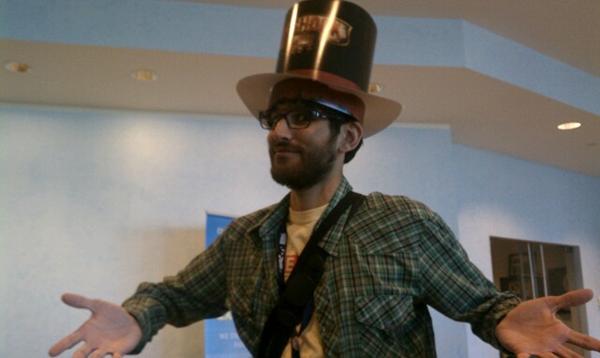 The concert – Every PAX event holds a Saturday night show that you shouldn’t miss under any circumstances. For the past two years, this has been an unbelievable experience. MC Frontalot, Jonathan Coulton, Paul & Storm and VGO put together one of the finest music and comedy sessions any gamer could imagine. The feeling of thousands of Portal fans signing along to “Still Alive” is a feeling you’ll never forget. The comedy sketches that Paul & Storm put together will leave you laughing for days. And then you have amazing moments like this “Build The Wall” Jazz rendition by VGO and Courtney Knott. There were chills going down my spine as I watched this excellence unfold right in front of me:

The panels – If you ever go to a PAX event, you absolutely have to take a few minutes to check out the panel discussion schedules and pick out a few that interest you. Make it a point to make it to these panels. You’ll get a chance to know the speakers on a more personal level. An off-the-cuff honest discussion is not something you get to experience every day with writers, developers and community members. I even managed to get a chance to see Adam Sessler record an episode of X-Play at his panel and that man is a comedic genius. It really is a different experience seeing how some of the industry’s biggest names act off the camera. These moments should really be cherished.

Random moments of unity – There are a few things that don’t seem like they should stand out but will surely be things you remember for a very long time. Let me explain a little. You know the feeling you get when you watch a flash mob video and you are generally impressed with the effort it takes to put something together like that? Now imagine sequences like that happening all around you randomly for three days. During my time in Boston I witnessed a team of people dressed up like scientists in Aperture lab coats singing “Still Alive” at the Rock Band stage. A line of people waiting for a panel break out in a massive sing-along of “Bohemian Rhapsody” and even a group of about thirty shirt-less dudes doing the “YMCA” in perfect unison outside of the Dance Central stage.

In a large part, the majority of PAX attendees are there to check out games that they are excited to get their hands on and that is totally fine, I enjoyed many games myself over the past few days. But it’s these experiences and moments listed above that make this a truly remarkable experience that you can’t really find anywhere else. A feeling of being in a convention center filled with thousands of people that you can truly relate to is a rare feeling for most gamers. If you haven’t ever attended a PAX event, then I urge you to check one out and try to take some time to appreciate the greatness happening all around you. It’s without a doubt three of the best days you’ll ever have. Take my word for it and come say “hi” when you show up. There’s a 99.9% chance I’ll be there :)