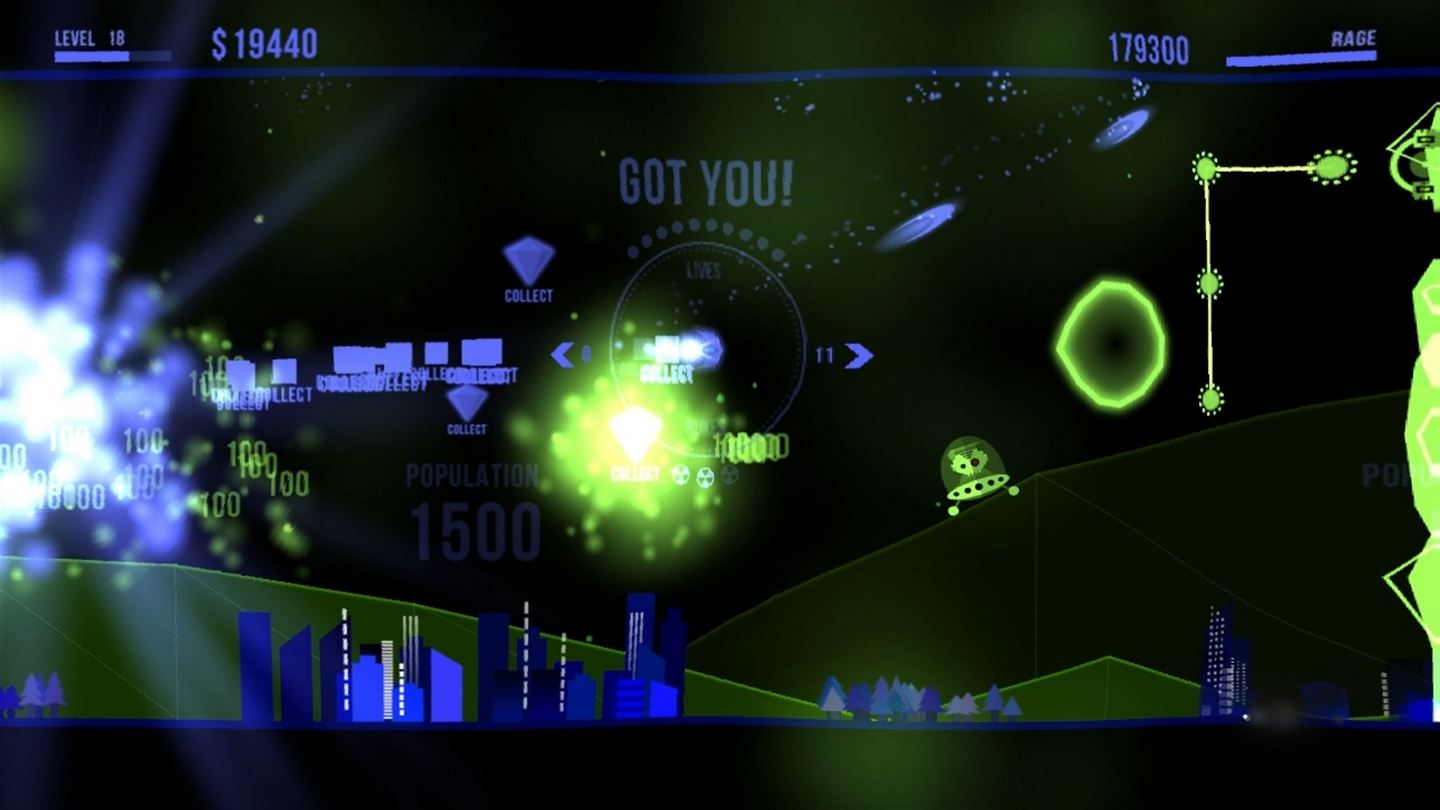 With as much as technology has evolved over the years, it never ceases to surprise me how much gaming tends to trend on ideas from the past. Sky Force Reloaded recently released and felt like a new age Galaga. Now I’ve had the opportunity to experience Pumpkin Games Paladin: a chaotic twin-stick shooter that mirrors the greatness of Defender, while still introducing new elements to give the game its own life. Does Paladin bring honor to the retro theme or are some ideas best left in the past?

In Paladin you play the last hero of Earth. Your one and only objective is to defend the last cities from waves of incoming aliens. Armed with one of five available ships (each having their own weapons and abilities), you will need to survive or die in an onslaught to save your world from total annihilation. The simplistic controls make the game feel very fluent and welcoming to even the newest of players. Left stick moves you around while the right stick shoots. The left bumper activates your rage mode, which helps you shoot faster and output more damage quicker. The right bumper activates a nuke which kills all enemies presently on screen. Lock and load for the fight of your life. 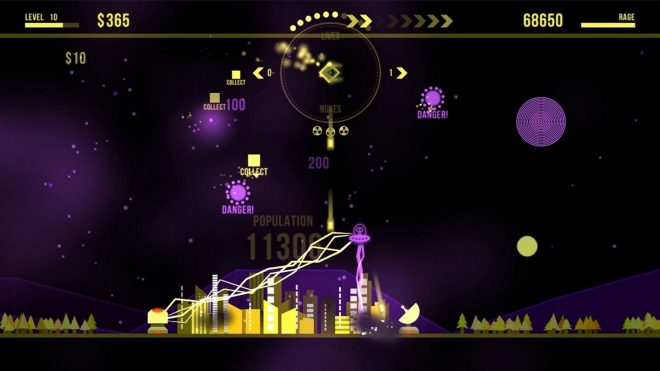 Simplified – For any game that borrows a lot of its inspiration from an old Atari game, one of my biggest concerns is whether or not it will stay true to the simplistic controls and gameplay, or if the newer concepts that are added in will overcomplicate the game. Thankfully in Paladin, everything from the controls to the upgrades you can apply between rounds and even what is required to defeat the enemies is as simple as it needs to be. If anything is complicated at all in the game, it’s deciding whether or not to buy an upgrade to your shots power or extra lives.

Enemies – The enemy types the game has to offer is one of it’s strongest aspects. From a simple ship flying toward you trying to crash into you to a bigger ship with a shield that when destroyed shoots a few “last chance” projectiles at you to try and take your life, there are many different enemies to add to the uniqueness. There’s even an interesting snake-like enemy that requires the head to be destroyed to be killed.  The game does a great job of introducing each new enemy type as the first level this enemy appears in only includes that one type of enemy which gives you an opportunity to learn their attacks as well as what it takes to defeat them. In some of the later levels, it’s very fun to see all the different enemy types binding together in one crazy battle.

Upgrade Complete! – The various upgrades that are available in the shop are more or less a blessing. You can upgrade your rate or fire or power to your shots. Or perhaps you’d rather buy more lives instead. You can even buy a nuke upgrade, which makes it to where your ship will set off a nuke (if one is available) to save you from losing a life if you’re hit. There are even some interesting upgrades to the cities that increase population or give the city a defense mechanism to defend themselves. These type of upgrades are useful, but enemy numbers can still become overwhelming to the point you will need to go save the city. 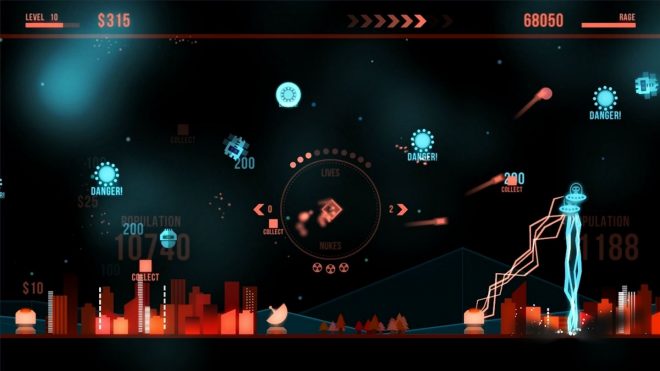 That’s a wrap! – Paladin comes included with forty levels of chaos which may seem like a lot for some when looking at it from an “outside looking in” perspective, but in the reality of it, as fast as some of the levels go by, the game is actually a lot shorter than it needs to be. In about 35 minutes, I finished all forty levels and had finished the game. Once level forty is completed, the game ends. There’s no possibility to continue playing through further levels with your same ship and upgrades unless you replay a level from that ships checkpoint. Each ship has a different checkpoint system though, so it does give you the choice of playing through all forty levels again with a different vessel.

The Bosses – Every 10 levels after you finish eliminating all enemies you will be met with a boss which is required to be defeated to progress further. The boss you encounter from level 10 is the same boss you will face in the future levels, A monster with a diamond shaped face and four little cubes that need to be shot to destroy him. Yes, the monster does bring new attacks to obliterate you with, but when you already know what to do to defeat this enemy each time, it doesn’t really make it challenging. I personally saved my rage ability for the boss levels, simply because the increased damage and fire rate helped destroy the boss in 30 – 45 seconds. What might have possibly added to the challenge and the play time, is different unique bosses, all with different ways to be killed. 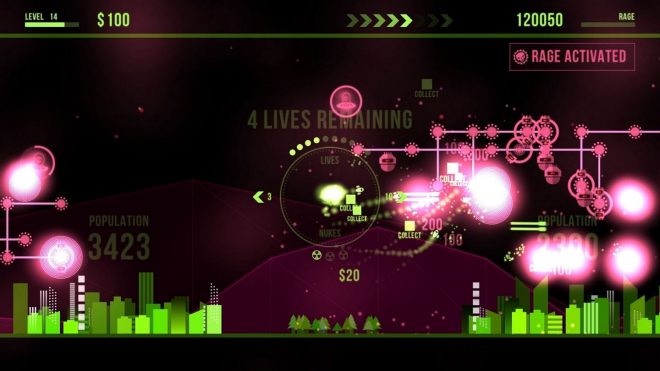 For what it is worth, Paladin was by no means a disappointing game. It brought forth the additions I was hoping it would while paying homage to the classic formula of Defender. It would have been nice to see more than forty levels, or the possibility of an endless mode that keeps going until you die, but alas no such mode is present. Indeed, the difficulty of completing all forty levels and the time it is completed in all bases on the skill of the player and how different elements play in their favor. The 35 minutes that I had spent was definitely worth it, but unless you plan to play the game again using the other 4 ships at your disposal, then the $9.99 price you pay might not seem worth it.

Paladin was developed and produced by Pumpkin Games. It released on December 7, 2017 for $9.99. A copy of the game was provided for review purposes. 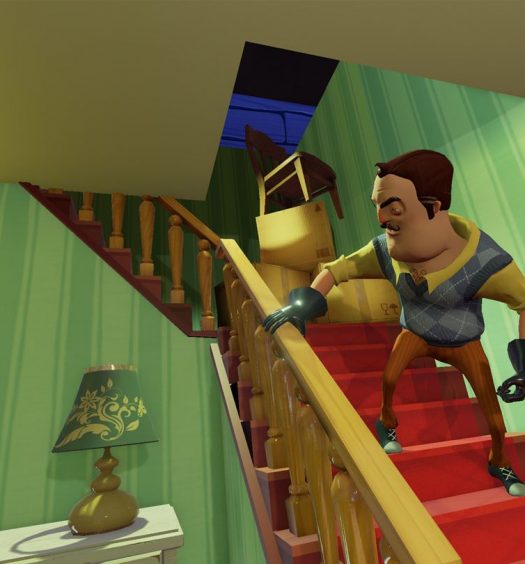