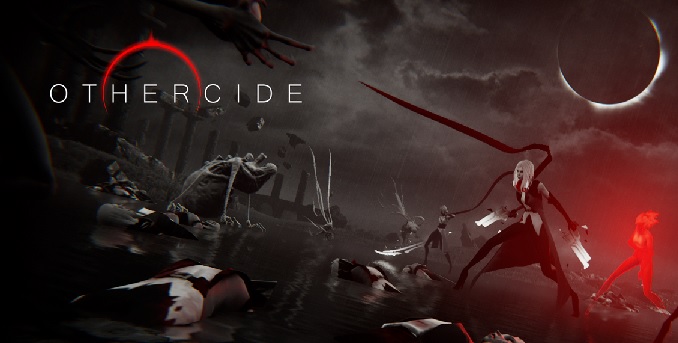 Humanity’s last hope rests on the shoulders of The Daughters. These daughters are clones of the greatest warrior to ever live. They come in three classes (later, a fourth) and you can birth, sacrifice, and level them up. Send them on missions to hunt evil creatures. If you fail, you can start over and put points into permanent perks that make your army of one stronger. Choose from your pool of daughters and send them to battle, choosing whatever combination you desire. There are various types of battles in Othercide that have you hunting evil or even protecting someone. It’s a turn-based grid system and requires the use of ability points to move and attack. You can battle however you want to. Do three long-ranged, gun-wielding daughters fit your style? Or maybe you want a shield daughter and two sword warriors? Do as you please, but know they will most likely die and you’ll need to start anew. Each day is a new battle and you’ll eventually face bosses that will attack you by the week’s end if you don’t attack them first. Will your daughters be strong enough?

Visually Pleasing — There’s no doubt about it, the visuals presented in this game are beautiful yet cool. Black and white is the main theme, but highlights of red give it some color. Besides aesthetics, the movements from the daughters are slick and breathe style into an otherwise void-looking world. The presentation is top-notch, even when just browsing what to do next or looking through your warriors. It all just looks so good! The design of the monsters looks like something out of a horror film, maybe even inspired by Guillermo del Toro. The bosses are even more terrifying. While there isn’t a multitude of environments, none of what you look at gets boring.

Ultimate Sacrifice — In order to heal one of your characters, you must sacrifice another of the same level or higher. This creates a nice little balancing act of choosing who to dispatch. I never got attached to any of the characters because I knew what would be happening to them. It is possible to resurrect them later as well if you want to. It’s a neat concept and actually fits in with the story. If you have essentially an unlimited supply of daughters, why let them heal? It gives more depth to decision-making and adds a bit of a challenge.

Short To-Do List— Early on, you’ll think you’re moving in the right direction. Doing missions, leveling up, and finally fighting the boss. There is no way to beat him. You will lose by a landslide. Here starts a long grind of doing everything over again, just trying to unlock new perks and plan how to get your characters stronger. It is here where I really started to lose interest. The battles are not only short, but there are only a few different variations. You can’t really customize the look of The Daughters either, giving only one goal which is to get strong enough to beat the boss, then to move on to just a more difficult set of days. It’s just repeating over and over the same exact thing. In fact, one of the loading screens say “are you going to repeat the same mistakes, again and again?” Well, even the game admits the problem.

Let’s Start Over — To go along with the above paragraph, I don’t like starting over so often. It’s very forced. If I lose, sure; let’s try again. But even when winning every battle, there will be a point (the boss) that’s impossible and you have to go back to day one. Sure, you get perks, but they require certain deeds to be done. Doing this so often is downright exhausting. Hours of work to move only slightly forward. Maybe it wasn’t “hours” but it sure feels like it when you’re doing the same stuff. Keeping your levels isn’t a problem, however, the cool sacrificing feature must be used so sometimes the highest level is so low on health that you have no choice but to dispatch them. You’ll be fine with that, considering you lose those levels when you restart anyways. Blah! There has to be something that could make it feel better to do it all over again in order to keep the attention of the player.

Whose Turn Is It? — I’ve played my share of turn-based, grid-based combat. This could very well be one of the most confusing. If you highlight a daughter and it’s not her turn, you can’t move. Then you’re wondering if you just don’t have ability points, but really it’s because you have the wrong person. They all look so much alike that it’s often difficult to figure out where they are. This could have been solved with a simple highlight feature, or maybe the names of the characters on the bar that displays whose turn it is next. It’s really quite a mess throughout the battles. Unless I’m just missing something, it’s poorly executed.

Cool on the surface, you’ll likely enjoy what you’re looking at. The style and idea of this evil world with female fighters who are an unlimited supply of clones is just awesome and unique. The major setback is the repetitive gameplay that isn’t varied. It’s like you’re just playing a demo for hours with no feeling of actual progression because of how many times you’ll be restarting. Without a really fleshed out story, you almost don’t have anything to really fight for. Seeing the conclusion of the story isn’t exciting because you expect it to just end without any dramatic elements in place. There just isn’t enough meat in it to satisfy your hunger. It’s a beautiful world, but not one you’re going to stay in for long.

Othercide was published by Focus Home Interactive and developed by Lightbulb Crew on Xbox One. It was released on July 28, 2020, for $39.99. A copy was provided for review purposes.