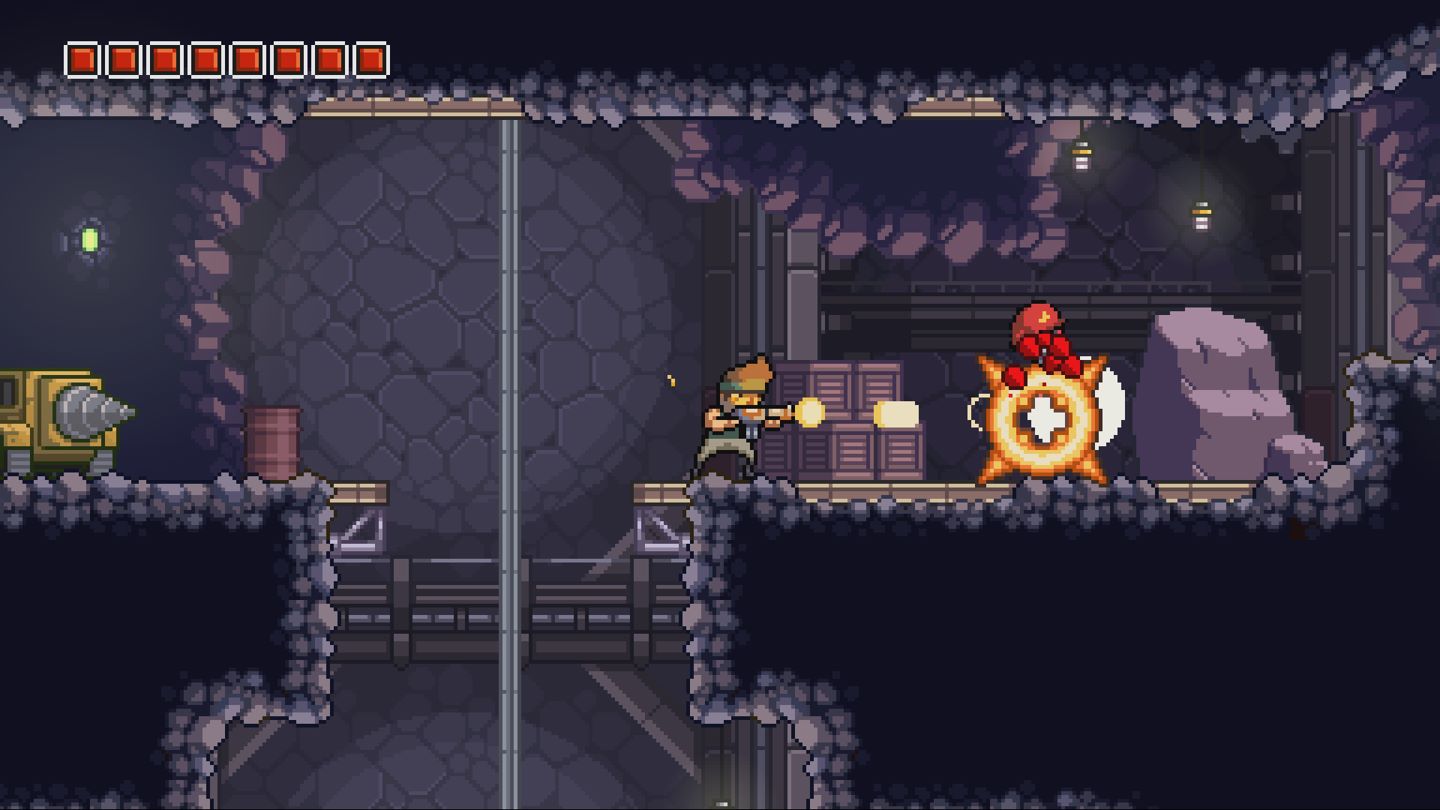 When it comes to gaming, there cannot be any better feeling than your guns blazing while artfully dodging everything your enemy throws at you. It’s a pretty easy task when most games let your character carry an abundance of weaponry so large you start to wonder where your character puts it all. Then there are the games that allow a character to use one specific type of weapon, with different skills or abilities to aid them. Omega Strike is that type of game! This action-adventure Metroidvania game developed by Woblyware pushes you to lead a team of three different heroes all equipped with their own weapons and unique skills.

The story has a similar beat to that of Captain America, but with more evil intentions. The respected Doctor Omega was working on a formula for making soldiers stronger and more effective. The formula worked temporarily though would soon lead to mutations. With his new mutant army, Doctor Omega looked toward world domination. It’d be an easy task if not for three brave freedom fighters standing in his way. Sarge, Bear and Dex are all ready for battle looking to seek out Professor Einhorn, who can help them with assaulting Doctor Omega’s floating omega citadel. Sarge is a brave soldier who carries an assault rifle and later learns skills necessary to survive the fight, such as rolling and clambering along pipes. Bear is a grizzly man who wields a grenade launcher and can push huge blocks out of the way. Dex is nothing short of a ninja with a gun. His pump shotgun is not only the most effective weapon in the game, but he also has a very useful double jump that can help evade enemy fire and certain death.

Variance required – Expect to be switching between characters a lot because Omega Strike isn’t a game where one character rules over the others. Granted, when you play as Dex later in the game and his shotgun is fully upgraded, he will mow over a decent number of enemies, but his shotgun’s range is lesser than that of Sarge’s assault rifle, and neither of their weapons can even hit the turrets on the floor – which require Bear’s grenade launcher and skillful bank shots. Even the various skills that each of the characters possess mean that you won’t be able to stick with just one character even if you wanted to. In most cases, at the time you defeat a boss and unlock a new skill you’ll need to use that skill to reach the next area. Their different skills also help against certain enemies and bosses in many ways as well.

Two Difficulties – Upon starting the game for the first time, the game will ask whether or not you’d like to play on normal or hard. Don’t let the normal fool you: the game still offers some difficulty in areas as well as during certain boss fights. Changing to the hard difficulty led to an exponential increase in difficulty from things like new placements of hazards such as land mines and different shot patterns for a boss compared to what you’d see on the normal difficulty. The difference in difficulty is easily noticeable but it does help those looking for a second playthrough to truly have their skills tested. 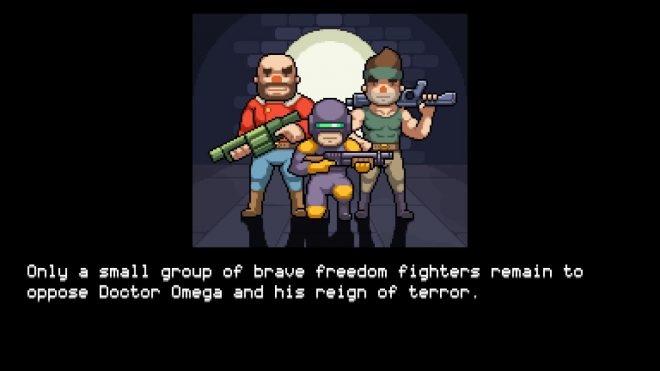 Character Swapping–  Swapping between the three fighters is instant. Whenever the need arises, a simple press of the Y button will immediately bring out the next character. Unfortunately, there’s only one button for swapping to the next character and they rotate in a specific order, so if you’re playing as Sarge and you need to Dex for a double jump, you’ll be required to double tap the button to switch twice. It would have been nice to have two separate buttons to cycle between the two additional characters, but it’s not a big deal. You’re even able to switch characters in mid-air which means some of the abilities acquired later in the game can be chained together in interesting ways.

Ammo Reserves – Thankfully you won’t need to worry about your ammo reserves before fighting a boss with the ability to shoot your guns infinitely. Granted, it can lead one to believe that fights would be easy since you can basically hold down the trigger and run forward, but it’s not that simple. The idea behind why their ammo supply is unlimited and why they can fire their guns without the need for reload is unexplained. It poses the question of whether these guns or their ammo are magical in some way or do they just have an endless pocket of ammo the player cannot see?

Area Maps – Thankfully if you’re confused on where to go, the game does offer an area map of every location you visit. The map fills in as you explore the various rooms of a location. If you become lost you can look over each map to see if there was a room you may have missed, and also help you to keep track of exactly where you need to go if you’re venturing back into an area you’ve already explored. There are so many unique rooms in each area that it can sometimes become confusing just where exactly you are and where you need to go to reach your destination. The maps do also show various save points you have discovered as well as the exit point for the area. 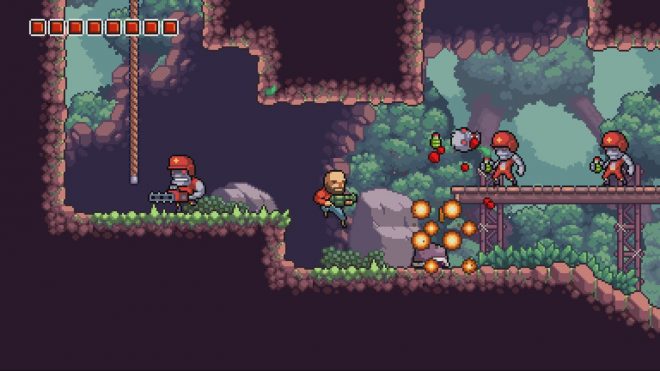 Area Collectibles – In each location there are a varied number of life cubes, chests, and medkits. As you collect these items, it starts to become an issue where the remaining items are. You’ll even get to the point where every map of every area is fully explored, but there are still items to be collected. There are a large number of hidden walls in the levels that you can walk through in the levels. It’s almost as if some collectibles are hidden almost too well and finding them without some sort of guide seems extremely difficult. There needed to be some sort of map you could purchase from one of the vendors in-game, even if for a substantial amount of gold to help track the collectible items in each area. If offered or rewarded post game, that’d have been fine as well. Without a map, collecting these items starts to feel like a chore. 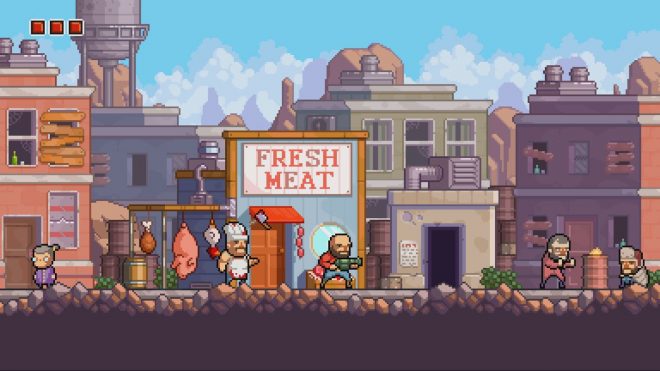 Omega Strike is that game that you go in thinking you know what to expect, but with the overall game design, it comes together into something more special than you could have possibly imagined. The controls are simplistic, the game offers a challenge even on its base difficulty and the story is funny and interesting. You can expect the first playthrough to take around six to seven hours, depending on how many items you’re going for and if you get stuck at any point. It would be interesting to see potential add-on content whether it be story related or new various game modes. How about a prequel? They could call it Alpha Strike. The tagline could be something like, “Before there was Omega, there was Alpha!”. Seriously though, even if this is it and there’s nothing else to expect from Omega Strike, the main experience alone is worth the time and the hard mode adds worthy, challenging replay value.

Omega Strike was developed by WoblyWare and Stage Clear Studios and published by Digerati. The game released on June 15, 2018, for $11.99. A copy was provided for review purposes. 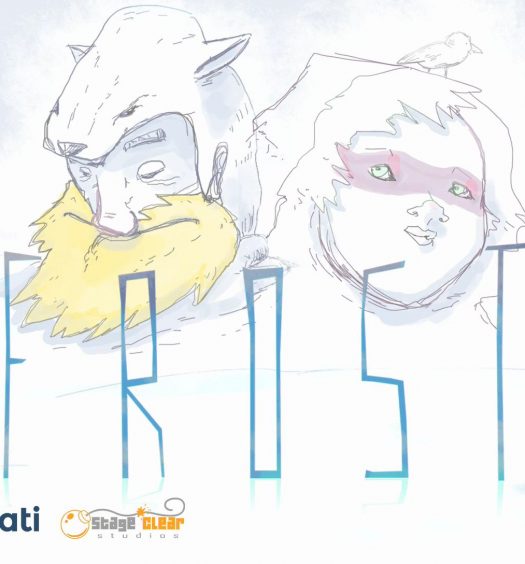