NFL Blitz was developed by EA Tiburon and published by EA Sports. It was released on January 4, 2011 for 1200 MSP. A copy was provided for review purposes. 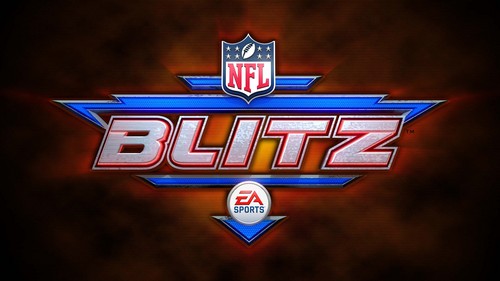 One of the most beloved video game franchises of all-time is back. Although EA now has the right to the license, it means it’s being developed by a studio that knows how to make football games. EA Tiburon has tried to make a full-featured product, packed with several online game modes. This does not mean the newest NFL Blitz in the series is perfect. While it’s not riddled with bugs or glitches, it seems like a much more laid back NFL Blitz experience. Which is unlike the crazy atmosphere that usually surrounded past games in the franchise.

Multiplayer – This is where the game truly shines. Elite League and Blitz Battles are the two multiplayer modes, along with online/offline co-op.

Elite League is very similar to Madden Ultimate Team, except there is no option to play against the CPU, meaning you have to play online to play this mode. Upon starting up the mode, you get a set of cards. These cards will be your lineup in your first game. After completing each game you will then earn Blitz Bucks, which will help you gain more players and powerups. This means, that at the time of this review, you can not buy card packs or blitz bucks with real money. The downside with Elite League is that it doesn’t seem to be too popular, as it was hard to find games at certain times during the day.

Blitz Battles is the more head-to-head game mode, with traditional teams and players. But in this mode you can also create your own team, and add a friend as the co-owner. After you create a team, you can then invite your co-owner into a game and take that team online. It makes teamwork all the more important, especially if you’re tired of beating up on your friend online and want to try something different.

Co-op is also a big feature, as known from the Blitz Battles mode from earlier, with both local and online being available. When playing the aforementioned Blitz Battles mode, once you create a team you can play online with you co-captain against two other players. One person would play the QB and select the plays, and the other player would play the WR. Then every possession, you’ll switch positions. This forces you to use teamwork, but we just wish you could switch between what WR you want to be.

Leaderboards are also a huge part of the online experience. Each leaderboard has three different levels; rookie, pro and veteran. After enough ranking points and wins, you then move up to the regional leaderboard and then hall of fame. For a new game, it’s a bold thing to have so many leaderboards, especially if the online community dies down quickly.

With all of that said about the multiplayer, the overall online experience we had was smooth, with only one disconnection during our playing time. This is the complete opposite of Madden NFL 12, where it was almost impossible to get into an online game during the first few weeks of launch.

Gameplay (sort of) – Upon starting up your first game, you easily know that it’s NFL Blitz. The feel, atmosphere, and Tim Kitzrow all let you know right away what game you’re playing. Only a little has changed from what most of us are used to. You can still knock over your opponents as soon as the ball is snapped, thus making chaos ensue for your opponent. Of course, that becomes an annoyance if that keeps happening to you, but that’s all in a game of NFL Blitz. Jump passing is a little different, though, which will result in more sacks if you’re used to the jump pass in old Blitz games.

The passing can be a bit off at times. You select receivers using the right stick and throw the ball with the B button. Sometimes when trying to switch receivers, it won’t actually switch, thus making the QB throw the ball to the wrong player. It’s a rare occurrence, but when it does happen, it’s without a doubt annoying.

The classic way of entering cheat codes returns. Before each game you can enter big head mode, little head mode, and other old, and new, cheat codes. You can also purchase more cheat codes with the blitz bucks you earn from online games. Also just like past games there is a little bit of rubber band AI involved, just like you see in racing games. If you’re too far away from the defender, they will gain a little burst of speed that makes them catch up to you. It does get annoying when you think you’re going to score, but it also makes sense. Celebrating also returns. By simply pushing up on the right stick, you can taunt your opponent on the way to the endzone.

Nothing with the gameplay seems terrible, with only a few minor annoyances, the game plays well. But just like we said in the first paragraph of this review, it definitely feels like a much more laid back game.

Visuals – It’s nice to have a widescreen, HD version of NFL Blitz, something fans have been clamoring for over the past few years. The outrageous player models still fit the game, even years later. Each stadium is represented, and they look close enough to their real-life counterparts. The downside to the visuals is the the noticeable no left-handed quarterbacks. Each QB, including Tim Tebow and Michael Vick, throw the ball right-handed. For most people it’s not a huge deal, and it was the same way with Madden Arcade that was released a few years back — but for hardcore NFL fans, it’s easy to spot. We like the visuals purely due to the fact we now have and HD version of NFL Blitz, and you just can’t ignore that.

Blitz Store – The Blitz Store is where you’re able to purchase said cheat codes mentioned earlier, as well as special teams and players, with Blitz Bucks you earn in online games. In the store you can purchase a single zombie, or a team of zombies to use online of offline. This way of unlocking characters makes the single player mode, Blitz Gauntlet, almost obsolete. It’s safe to say that the majority of players’ time will be in the online modes. So why play the Blitz Gauntlet mode several times to unlock players/teams, when you can play online, earn blitz bucks, and unlock them that way? With all of that said, the Blitz Store is great for players who could care less about the single player mode, but still want those fantasy characters and teams. 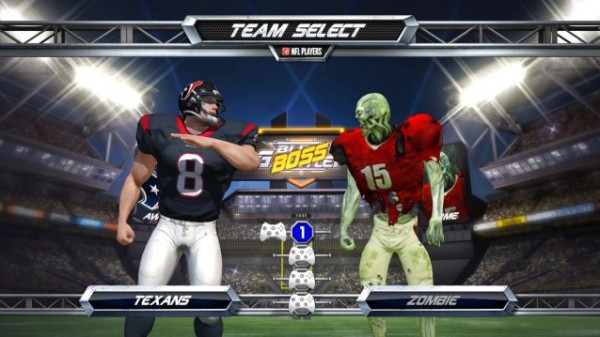 Single player – This could just be a personal opinion, but what makes NFL Blitz fun is playing locally with other people, and with the new version, it’s even more fun playing against people from all over the country. Blitz Gauntlet is the main mode for single player. This is also how you unlock special characters and teams, I.E. zombies or cheese heads, via defeating teams in a ladder (similar to Mortal Kombat). After defeating two real life NFL teams, you then face-off in a boss battle against said zombies, etc. Each boss battle contains power ups that are  on spread out on the field, which does add a little variety to these games. You can select which difficulty you want to play the Gauntlet mode on, but the mode still offers little to no challenge. It’s nice to have a way to get these unlockables, though, but it’s simply not fun to play the game against the CPU.

No late hits – For a majority of the development time for the new NFL Blitz, late hits were actually in the game. The lack of late hits, although not Tiburon’s fault, is still one of the calling cards of the series — and it might deter some buyers. You can also tell they were unable to add in anything to replace the late hits, as there is about a two to three second delay after each play.

Commentary – Tim Kitzrow is back, along with Brian Haley. Some would think that’s a good thing, but the commentary is extremely flat. In past Blitz games, the commentary was never really about the play occurring on the field, but with times changing, it would be nice if the Kitzrow and Haley would talk a little bit about what’s going on. Not only that, but a majority of the one-liners in the game are just not funny. And although comedy is one of the most subjective things in the world, there is just nothing enjoyable about the commentary in NFL Blitz.

NFL Blitz is still not a franchise for everyone, and EA Sports was very ambitious with this iteration. The multiplayer is truly the bright spot of NFL Blitz, with some exceptional modes. And although it has a simplistic control scheme, and is far easier to pick up and play over Madden NFL, the newest iteration is lacking in a few areas. Some of the problems associated with the game can be the fault of the NFL, however. Tiburon just simply did not go far enough with their version of the franchise. By no means is it a bad game, it has its moments, and is actually fun against other human players. For hardcore fans of the series, this version will be just fine, but it’s simply not the NFL Blitz most of us are used to.

Bishop has been writing about video games for years now, and is very passionate about video games. In 2009, he started his own site, www.bishopsgamingworld.com, to let people know his opinions on the gaming universe. Whether it be sports games, first-person shooters, or action games, Bishop has always had a soft spot for video games. He is now turning that passion and soft spot into a journalism career. 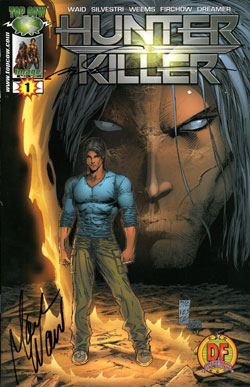 Read More
Comic book Hunter-Killer is getting an XBLA makeover 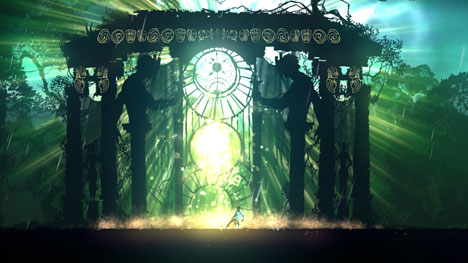