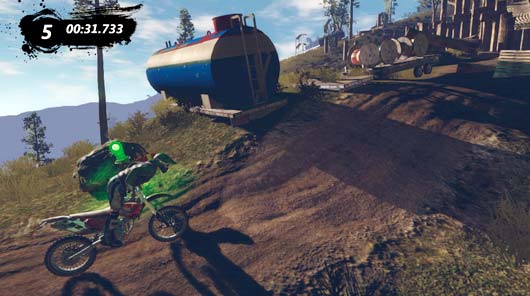 The Inside Xbox team – spearheaded by Dan Maher – has snagged an interview with RedLynx PR and marketing man Jason Bates. In it, Bates speaks about forthcoming follow-up to hit XBLA title Trials HD, Trials Evolution. Specifically, he doles out information on the new editor, track sharing features and, crucially, what hasn’t been tinkered with.

“We are using the same basic gameplay physics; the exact same controls you’re used too. Everything that was perfect in Trials HD we’re not touching, we’re not messing with that part.”

“But [the] multiplayer experience, versus racing somebody’s ghost or trying to beat someone’s time, it’s very different. Up to four players, side-by-side, running at the same time. It’s really competitive. It’s really fast. You can do a whole lot of races in one sitting. It’s a great ‘get the mates over and have a few pints’ kind of game.”

Bates also confirmed that Evolution would leave behind HD’s murky warehouse setting in favour of sunlight and fresh air.

“It’s now totally outdoors… we’ve built this rather large game-world area. These aren’t faked backgrounds. It’s kind of like an overhead map and you choose where to lay out the track; across rivers, over mountains, in forests, in a little town.”

Evolution was original pencilled in for a 2011 release but subsequently overshot and Bates skirts around the topic when asked. The teeth-gnashingly tricky Trials HD rocketed through the 2-million sales barrier last May, and that was without taking into account downloadable content and additional sales garnered through physical sales of the Xbox Live Arcade Triple Pack. It’s very popular indeed and here’s hoping we won’t have to wait until 2012’s Summer of Arcade for Evolution.

Bates went out waxing lyrical about the sheer size of the sequel:

“It’s going to probably be one of the biggest, most ambitious Xbox Live Arcade titles ever.”