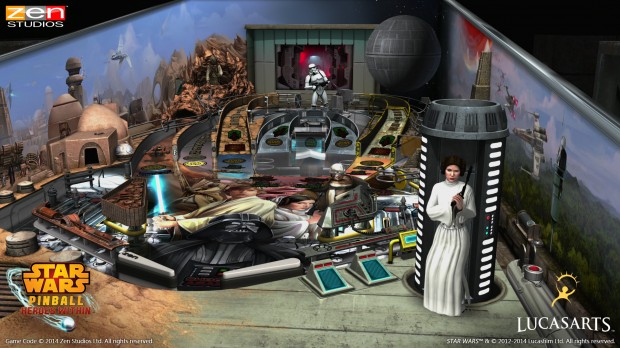 Zen Studios will soon release Star Wars Pinball: Heroes Within for Xbox One and Xbox 360. This pinball pack will complete the original Star Wars trilogy of pinball tables — the newest table revealed in the trailer below features Episode IV: A New Hope. Players can rescue Leia, race to stop the trash compactor from closing in and fly through the trenches in Luke’s X-Wing fighter as they make the final assault on the Death Star. Zen Studious continues to expand the frame of what is possible for digital pinball, and the narrative moments from the film — note Leia’s capture and Luke’s training session with the remote — transfer nicely to the pinball table.

The full Star Wars: Heroes Within package will include three tables, and this is the second of them to be revealed. The first is a table featuring Han Solo, which follows Zen Studios’ pattern of releasing one character-themed table, one general Star Wars table and one film-themed table. The quality of these pinball tables has been consistently high, which only increases the expectations for this promising set, “coming soon” to Xbox 360.