Star Wars is in many ways the ideal environment for pinball. The space battles of the movies invite gameplay focused on delivering armaments (torpedoes, pinballs) to a target (a ventilation shaft, a sinkhole) in such a way as to make the pinball gameplay feel more natural than many other adaptations Zen has created. Balance of the Force continues to push at the boundaries of what video game pinball can do. The tables feature extremely tight pinball mechanics — players will never feel like they failed because the controls failed them; rather, the accurate and chaotic physics of pinball inevitably lead to a drained ball because of the choices made by the player. Pinball FX2 in all its forms remains the gold standard for pinball on consoles. 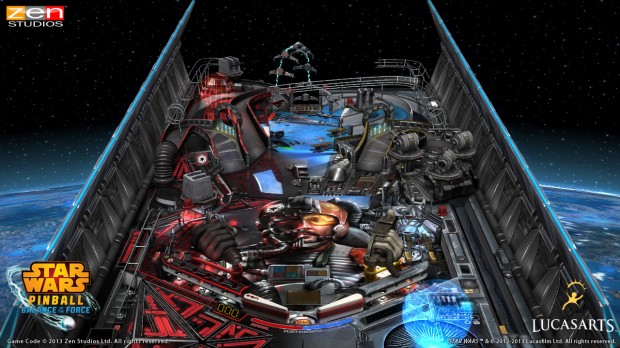 Presentation – This pack of tables features the most polished presentation of any of Zen’s pinball tables. The introduction to Starfighter Assault is particularly impressive, and will make older gamers pine for a re-release of X-Wing and TIE Fighter, as the perspective of the ships recalls those classic flight simulators. The Alliance ball launcher is a particularly nice treat. The other two tables look fantastic as well — with Return of the Jedi taking advantage of the Endor setting with natural wood textures and the Darth Vader table presented in reds and blacks. All three tables have a distinct visual identity.

Wide variety of play – Each of the three tables has a different focus. Starfighter Assault is geared around play in the center and the missions are the focus. This works well for the particular table, as the missions occasionally removes players from pinball temporarily for a Star Wars-skinned game of Galaga. The Darth Vader table is more focused on ramp combos and flow of play, and the missions don’t have the same presence that they do on the other two tables.  This is a refreshing change of pace which helps to balance out all three tables. The Return of the Jedi table is the most dangerous of the three tables in the set with numerous angles leading to a dropped ball, but this makes the gameplay more exciting, even if players will struggle to get a high score on Endor (unless they get lucky off of a timed bonus). 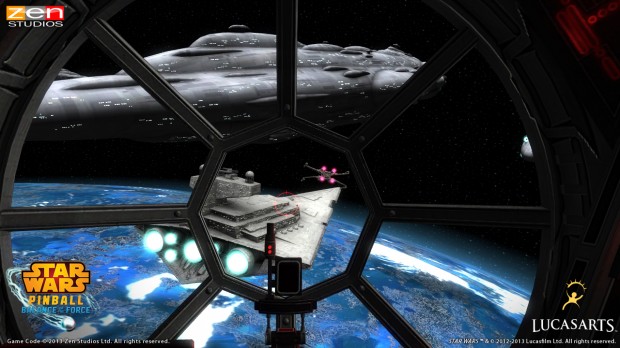 Illusion of choice – Starfighter Assault presents players with the option to choose between the Empire or the Rebel Alliance at the outset of a game. This choice alters some minor aesthetics on the table, but because the table layout, missions and targets are the same for each side. Therefore, the choice is a shallow one. The Alliance aesthetics are more engaging (thanks in large part to the Episode IV targeting computer used as the ball launcher), and it would have been nice to have the table dedicated to Biggs or Wedge, making use of the extensive cast of minor characters.

Score creep – The Darth Vader table has an optional introductory sequence in which Vader is constructed. For players who have seen all six films, the table essentially re-creates the final minutes of Episode III. This works very well, and the criticism here is not of gameplay but of score. The event grants players an easy 10 million points for completing it, making for another “non-choice” in the sense that everyone should undertake this task every time. While the 10 million is not a lot of points for expert players, having a table that every player starts the game millions of points higher than all of the other tables sets a dangerous precedent. 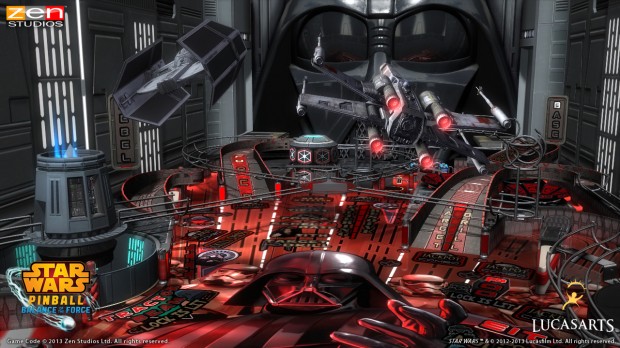 Overall, these pinball tables are among the best tables Zen has ever produced. Star Wars continues to be a rich environment for video game pinball, as gravity manipulation and tractor beams allow for gameplay impossible on a physical table. The cutscene quality also continues to improve with each subsequent pinball set, and these are among the best for the entire Pinball FX2 platform. Zen has now produced a largely Empire Strikes Back themed set of tables and a pack (this one) centered around Return of the Jedi. Even with six tables available, there are still many more opportunities for Star Wars pinball moving forward — here’s hoping for a Mos Eisley cantina table next time around.

Star Wars Pinball: Balance of the Force is the second set of Star Wars themed tables for the Pinball FX2 platform, developed by Zen Studios.  It was released October 16, 2013 for 800 MSP. A copy was provided for review purposes.