Nero was developed and published by Storm in a Teacup on Xbox One. It was released May 15, 2015 for $19.99. A copy was provided for review purposes.

If you asked me what I thought of Nero the moment after I finished it, I wouldn’t have been able to say anything. I had just completed a walk through a gorgeous storybook world, and it reduced me to an emotionally exhausted husk. Even as I write this review, I’m not sure if I’ve fully processed my experience with the game. Either this is one powerful game, or my heart is just really weak.

Nero straddles the line between a first person puzzler and a pure storytelling game. You spend half of the game walking around absorbing the game’s text-delivered tale, while the other is spent working on head-scratching brainteasers. It doesn’t take long to realize which half is stronger, as the puzzle gameplay often feels superfluous compared to the sections that are just walking and reading. The story a page-turner, but the game itself may be a harder sell. 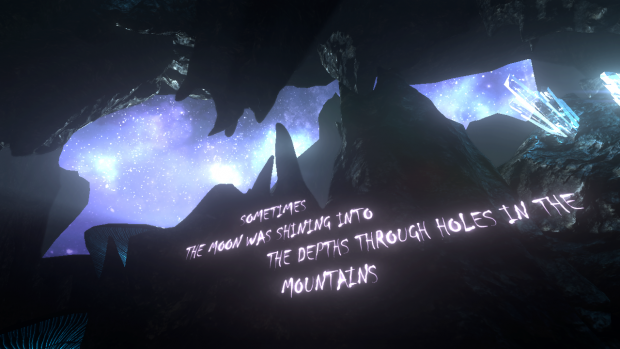 Beautiful story – The story plays out mostly through bright text spread along your path. At first it seems like an odd choice; even though the game is introduced by a narrator, you’re required to read a large amount of text throughout your journey. As you progress further through the game this narrative style starts to make sense, resulting in a beautifully constructed fable that is weaved perfectly into the world around you. I’ve been doing my best to avoid spoilers, as the less you know beforehand the better, but you should be aware that it’s extremely emotional with a powerful ending that will stick with you long after you play.

Beautiful scenery – I don’t need to tell you this game looks great, you can see the screenshots. Every moment of the game is visually remarkable as you explore dark environments accented with colorful neon highlights. CGI cutscenes take the visuals to the next level, as each chapter is accompanied by a short scene of mellow beauty. It’s a world you just want to walk through slowly and admire the scenery, and thankfully the game’s slow pace allows you to do just that. 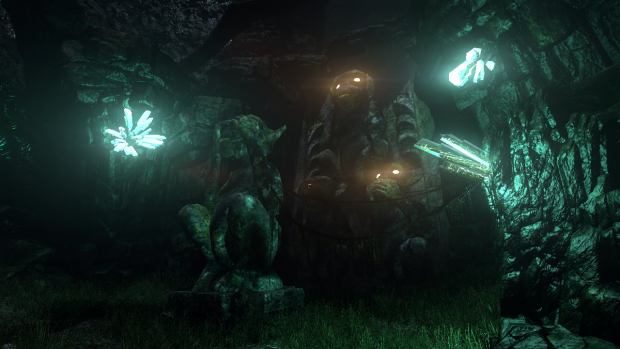 To puzzle or not to puzzle – I feel like this belongs in some odd limbo between a “like” and “didn’t like”, because Nero is a decent puzzle game. Nothing about the puzzles feel particularly unique when compared to other similar games, but that isn’t to say what’s there is bad. The game makes good use of its mechanics, the challenge scales fairly and many puzzles double as metaphors for the story. An odd choice was made in the level design, as the game is constructed to make most of the puzzles optional. A few puzzles block your path, but most you can just walk past. Completing these puzzles will give you a bit more narrative and often a collectible. While having some puzzles not be required can prevent some frustration, it can also lead to players (like me) unintentionally missing some of the game’s content.

Casting a spell – The controls in the game aren’t the best. General movement is sluggish, so much so you’ll never let your finger off the run button. The biggest annoyance comes from the mechanic where you cast balls of light from your hand. Left trigger draws the hand to aim, and right trigger shoots. After firing you can’t just leave your hand out and shoot again; you must put your hand away and re-draw for every single shot. Many puzzles require multiple light balls, or small targets you’ll frequently miss, so the control scheme can be a clunky nuisance. All in all everything in the game works, it just could be better. Nero is such a beautiful game, in more ways than one. The game creatively intertwines its graphics, story, and puzzles into an artistic cohesive whole. Gameplay is unfortunately the weakest facet, where awkward controls can make things more of a hassle than they should be. The puzzles themselves are designed well enough but are ultimately forgettable in the larger scheme of the game. This is the kind of game you play for the atmosphere, and while it’s usually hard to sell a game on story alone it’s nearly perfect in that regard.

Achievement notes: About half of the achievements in the game involve the game’s collectible, picture fragments scattered across each level. There’s also a secret achievement to complete every puzzle in the game. It’s completely possible to get these on your first go-round, as long as you keep your eyes peeled and always wander off the obvious path.

Nero Storm in a Teacup
Top