What’s old is new – Everything you’d want from the original ‘Splosion Man comes back. The three splode system, the steak giblets, the humor, all of it. Most of the obstacles you encountered in the last game come back, some of which are redesigned but function the same. The presentation is still great and the graphics show noticeable improvement. The lead character is new, but just as crazy as the original. She’s much more feminine, having walk cycles that include dancing and skipping, and instead of finding hidden cakes in each level you collect shoes. The tight and difficult gameplay requires thought, precision and careful timing. The co-op mode has been improved with less focus on bouncing off each other and more on fast-paced teamwork. It’s good, but single player is still where the game is at its best. Playing the first game is not necessary to play this one, but veteran sploders will have a slight edge in conquering challenges. 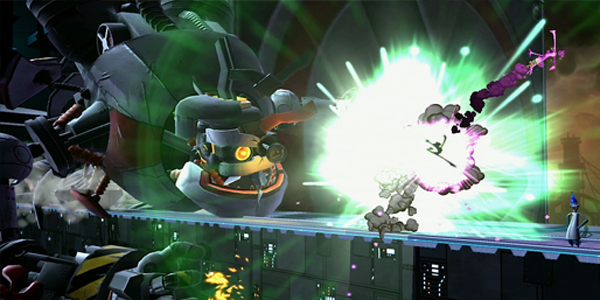 And what’s new is fantastic – The game has loads of new elements which enhance gameplay and level design. Among other things there are zip lines, trampolines, and Donkey Kong-esque cannons which keep gameplay fresh. The new items also allow for harder and more complex puzzles, which double as elegant deathtraps for scientists. The levels are now displayed on a nice overworld map, which branches so player can bypass some of the trickier levels, marked in red. There are also a handful of new hidden levels which require you to find a hidden exit in a previous level. They can be hard to find, but the hole in the overworld map will show in which level it can be found. There are only three worlds, like the original, but these are more diverse and freeing, as much of the game is played outside the laboratory. The wonderful mix of old and new, plus a handful of random surprises, keep everything exhilarating.

2 Girls 1 Controller mode – Truthfully this is more of a love/hate relationship. One person uses two joysticks and two bumpers to control two splosion women to play through all of the co-op levels alone. Sometimes you can get by controlling one at a time, or moving them both in the same direction, but multitasking is a pain. The single player campaign reaches a high level of difficulty without feeling impossible, but 2G1C is borderline infuriating. This mode is by far the most difficult part of the game. It’s definently an experience worth trying, no matter how much trouble you have with it. Completing a level will take a while, but reaching the end has a very satisfying feel.

Small glitches and annoyances – While playing through the game there are a few noticeable glitches. Maybe a certain part of the wall can’t be sploded off of, maybe the music won’t change when it should, maybe a barrel won’t land directly on the return platform. These glitches are rare, so rare that each were only encountered once during a whole playthrough, but can be annoying. Some puzzles expect you to finish the first time, therefore if you are forced back to the beginning in the same life, you have to die to reset everything. Normally these would be game breakers, but they happen so infrequently you may not even notice. 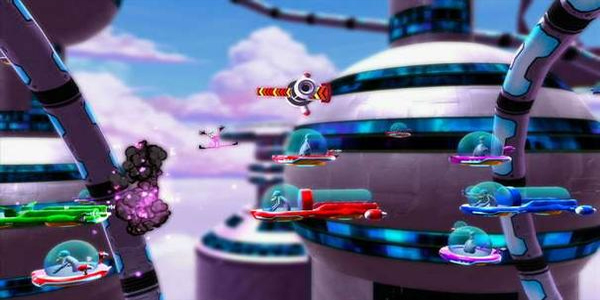 Ms. Splosion Man is one of those great sequels; it has everything that made the original great but still has a new feeling about it. The new features are great and add complexity and replay value. Everything about the game is tight, fast paced, hilarious, and screams fun. This game is not only a must have. Not only is it Twisted Pixel’s best work to date, but may be one of the best XBLA games of 2011. When the pause menu can put a smile on your face, you know the developers have done something right.

There’s something charming about Twisted Pixel’s characters, and our new pink heroine exudes that same gotta-love-her allure. Everything about her, from her visual design to her animations and vocal quips it lovable. Mix in a dash of the old ‘Splosion Man mechanics with new gameplay elements and it feels like something that’s truly a sequel. Everything is bigger and badder about this game. The difficulty is also ramped up, but thankfully the game now features a Super Mario Bros. 3-style overworld system which clearly marks the harder levels. It gives more novice players a way around while providing hardened veterans with the challenge they desire. The multiplayer is also top notch, both playing online and using 2 Girls 1 Controller mode. There’s no reason anyone should keep this out of their XBLA collection. At 800 MSP it’s an outright steal.