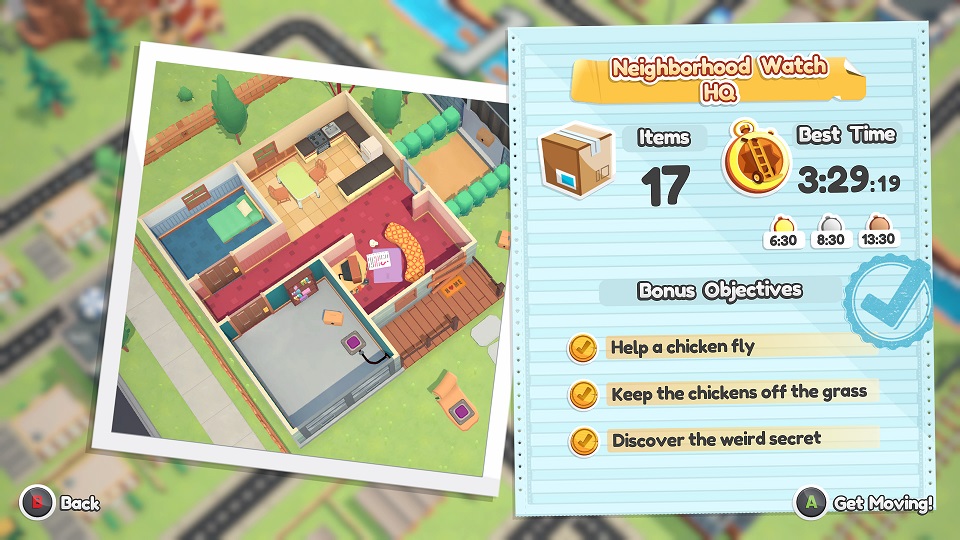 In Moving Out, there are several things to collect and obtain. This guide will walk you through everything so that you can obtain a full completion. If you’re having a difficult time, you can tone down the difficulty to assisted mode to earn the gold medals, which I didn’t know was possible until just a few levels left. I would have personally just started with this mode in order to complete it much faster, but I was afraid it would block achievements or not count for the gold. Indeed it all works and you can do it the easy way or the fairly difficult way. I’m sure it’s also much easier with multiple people because of being able to throw bigger items out of windows, but it’s still very manageable without any help, even without assisted mode.

Note: Remember you can always use Control F to search this guide for keywords such as the level or for example “Mailbox 8”. If on a mobile device using Chrome, click the dots in the corner and go to “Find in page”.

Misc Achievements: There are a few achievements you won’t get along the way of playing through the story and following the below guide.

The Friendly Ghosts – There are three levels with ghosts (Atari Office, Dread Manor, Roundabout Mansion). Complete each without slapping a ghost

Smash 100 Windows – Should come naturally, just find a level and break the windows if you don’t have it by the end

You Don’t Got Mail – Above Obadiah’s Orchard is a path, drive the truck into the mailbox

Go Long – Throw 500 items, could come naturally but if not just keep throwing the same item over and over to grind it out

Minute Mover – This will not really be possible on normal levels, you’ll get it during memory stages. The 2nd stage is a soccer field and you just need to deliver two items. Should take you less than 10 seconds

Quantity Over Quality – Deliver 1337 items. It could be natural but if you finished the game without the achievement, replay Deserted Depot which has 52 items on it and takes under 3 minutes

Look left, then right… – Get hit by 125 cars. Can play Packmore River and just keep letting yourself get hit

Remember the Time/Winners don’t move rugs – There are a VHS store and arcade located by the mandatory training building. These are bonus stages unlocked by completing objectives and obtaining gold medals. There are a total of 24 to complete.

Mailbox 1: A few rooms in, you’ll see a ghost and the mailbox

Mailbox 2: In the center by the flamingos
Toilet 1: In the green bathroom
Hidden Console: To the left of the front of the truck in bushes

Mailbox 3: By the front door
Toilet 2: Blue bathroom, must move the box first
Hidden Console: Move the picnic table in the backyard
Pet (Turtle): Turtle with red “eye mask”, move him to the truck

Mailbox 4: Front of house again
Toilet 3: In the white bathroom, move the box
Hidden Console: Backyard on the hammock
Pet (Chicken): Chicken runs out after you move the box in the backyard

Toilet 4: In the blue bathroom
Hidden Console: In the kitchen, jump on the counter to the left of the refrigerator. It’s against the wall (Opposite bookcase)

Mailbox 5: Yet again, in front of the house
Toilet 5: Pink toilet in the bathroom with green bathtub
Hidden Console: The bathroom is a popular place here. It’s next to the bathtub against the wall

Mailbox 6: By the red door next to the gnome
Toilet 6: Blue bathroom in the corner of second story
Hidden Console: There’s a game room with a red car. Once the car drops down you’ll see it in the corner
Pet (Goose): After you slap the mailbox, the goose will appear

Mailbox 7: To the right of the staircase
Toilet 7: In the blue bathroom with purple shower and sink
Hidden Console: In the corner bedroom between the snow slides. It’s behind the basketball hoop

Mailbox 8: In the oil that’s in front of the house
Toilet 8: In the orangish bathroom
Hidden Console: To the left of the red car in the garage
Pet (Sheep): This is part of the inventory you must throw into the truck

Hidden Console: In the back, there is a staircase. Go up and move the three haystacks to find it
Pet (Pig, Sheep, Chicken): All a part of the mission, not missable

Hidden Console: In front of the river on the left, by the bridge
Pet (Frog): Just lead the frog into the truck, you might have to give him a little push

Hidden Console: Upstairs you’ll see a trolley. Move it or jump over it and find the console at the end of the hallway

Hidden Console: Upstairs a piano will chase you. In the corner to the left of the window (be quick) you can grab it

Toilet 9: Upstairs on the right, a grey tiled floor with pink bathroom accessories
Hidden Console: In the room with sculptures, in a corner

Toilet 10: There is an outhouse on the right where a chicken runs out of. Go inside and try to jump around it’s hard to see but if you go to the bridge you can get a better look
Hidden Console: Next to the truck is a stack of hay. Slap it around and you’ll find the console underneath
Pet (Chicken): Part of what you need to pack in the truck

Toilet 11: Right when you enter the mansion you will see the bathroom
Hidden Console: Near the pier in the forest area, in a corner by a tree

Mailbox 9: In front of the truck
Hidden Console: In the fan area there is a giant stuffed giraffe. Look behind it

Hidden Console: Middle area back room, there is a yellow couch. Behind it is the console (easy to spot)

Hidden Console: Far back left, room with the water cooler (in a corner)

Hidden Console: From the switch, go to the bottom right corner

Hidden Console: Within the first few train cars, you should see a car that has a console on it. Grab it and jump back after tossing it inside the truck

Hidden Console: After passing over the colored symbols, go into the corner where the items are to find the console

Hidden Console: Behind the truck out of view

Hidden Console: In the yellow section against one of the last half-wall

Hidden Console: At the bottom left area, there are two pink walls. In the corner, you’ll find the console

Toilet 12: On the cliff behind the desk. It’s green
Hidden Console: Back of the cliff where there is a tv set up
Pet (Sheep): This is also one of your bonus objectives, easy to spot

Hidden Console: Behind a brick wall on the island to the left side of the screen

Mailbox 10: Possibly the best-hidden mailbox, go to the bottom-most right island that has a button and a speaker. You’ll see it
Toilet 13: The middle cliff area where the soccer ball is. It’s hanging there
Hidden Console: On the toilet, you can’t miss it going for the challenges

Hidden Console: During the 2nd phase of him throwing junk, the hidden console appear