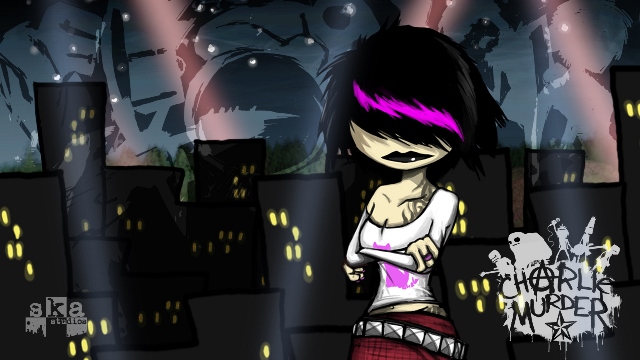 There’s a scene in Ska Studios’ Charlie Murder in which the members of the titular punk rock group do what rock stars do best. No, they don’t rock out, though the game does dedicates several scenes to just that. During the scene in question, the band does the rock star thing and tears apart a hotel room. The rambunctious five behave the way we’ve all come to expect rock stars to behave: irresponsibly. Furniture is destroyed, a mattress gets kicked, hell is raised.

So what, right? That’s all standard rock star fare, and it fits right into a game that celebrates nearly every aspect of the (undead) punk rocker lifestyle. That little mattress-kicking bit, though, well, that seems to have upset at least a few game critics. It’s not so much that the mattress is being kicked that caused the issue, but it’s the individual doing the kicking and the role she plays in the game on the whole that caused some reviewers to be put-off by the character.

The character is Kelly “Skelekitten” Skitten, and she spends most of the hotel scene meagerly kicking at a mattress while the rest of the band — which itself raises from hell in the game’s opening scene — raises hell. Eventually, a male member of the band walks over and does the job of destroying the mattress that Skitten apparently could not accomplish on her own. I noticed it while playing through Charlie Murder for review, but I thought it merely a harmless joke about a woman who looks to weigh all of 90 pounds not being capable of destroying a mattress by kicking it. Another critic felt differently.

In his Charlie Murder review, The Penny Arcade Report’s (PAR) Andrew Groen spoke ill of Kelly’s treatment during this scene as well as other unspecified ones during the game: “These moments are few, but gave a slightly icky feel to an otherwise masterful experience,” wrote Groen. Furthermore, his review stated that he found “the game’s treatment of its lone female character a little bit unnerving.”

Groen wasn’t actually the only reviewer to raise an objection about Kelly’s appearance in the game. Though he made no mention of the hotel scene specifically, Polygon’s Arthur Gies wrote in his Charlie Murder review that he was “surprised and more than a little annoyed” that Ska elected to make Kelly the band’s manager rather than giving her a larger part in the band proper. Continuing, Gies noted his displeasure with Kelly’s role in the Rock Band-like sequences that pop up a few times over the course of the game. “During any of the several performance mini-games,” he wrote, “every other character plays an instrument via timed presses of the different face buttons. Kelly’s stuck shaking a tambourine using a single button.”

My co-op partner who chose to play as Kelly during XBLAFans’ time with the review code also pointed out how simplistic Kelly’s notes are compared to the rest of the bands’. Really, it’s pretty hard to miss the fact that Kelly has relatively few notes to play, and that those she does have are all assigned to the same button. Is this an indication of yet another case of gender inequality in video games?

No other major publication seems to have thought so. Joystiq, GameTrailers, IGN, Official Xbox Magazine, GameSpot and Game Informer’s reviews gave no indication that their respective critics had any problem with Kelly’s in-game treatment. The closest any other professional games media outlet’s review comes to even talking about her seems to be Destructoid; however, reviewer Chris Carter had no problem with Kelly or any other character in the game. In fact, though he didn’t specifically mention Kelly in his review, Carter praised Ska Studios’ treatment of its characters. “All of the game’s characters, from the lowly fiend, to Charlie’s Band [sic], to the final boss all exude personality,” he wrote. 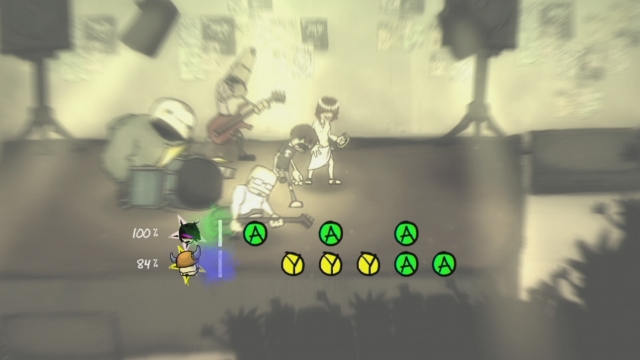 So, while the majority of outlets apparently had no problem with this particular issue, two well-known reviewers intimated that gender inequality exists in Ska Studios’ punk rock-themed XBLA brawler. The game’s creators — James Silva and Michelle Juett Silva — disagree. “I find it very interesting that a number of reviewers are commenting on Kelly having a smaller role than the other band members,” Juett Silva told XBLAFans via email, “when in fact A. she has a much BIGGER [Editor’s note: emphasis is Juett Silva’s] role than the other band members that maybe isn’t as obvious: yes she plays tambourine but she also plays trumpet, backup vocals and is the band’s manager because the rest of the guys are hopeless when it comes to organization and management and then B. She used to be a kidnapped girlfriend with no role other than a prize to be reclaimed.”

According to Juett Silva, Kelly is, in fact, quite the renaissance woman of punk rock. While Gies used the title “band manager” pejoratively in his review, Juett Silva believes the character actually deserves credit for being capable of managing a major punk rock band in the world of Charlie Murder. Her male counterparts in the band don’t have the skills necessary to manage it. The game is light on the story, so these realities are more implied in-game than directly acknowledged, so players and reviewers can probably be forgiven for overlooking these subtleties.

Regardless, Kelly is an important character in the game, even if her particular skill set doesn’t include guitar, drums or bass playing. She’s organized and runs the business. Interestingly, some of the same could be said of Juett Silva’s real-life role at Ska Studios. In addition to contributing artwork, she also handles all of the public relations and marketing efforts for the two-person developer. Is there a connection between Michelle Juett Silva and Kelly Skitten, then? That certainly seems to be the case. In fact, though the real-life Skelekitten said that her husband would have to confirm whether or not that was so, she did admit that she does “believe it was at least partly to do with my coming on board.”

There’s more to it than that, however. Specifically, there’s Juett Silva’s mention of Kelly’s original role in Charlie Murder: kidnapped girlfriend. Years ago, Ska’s brawler was being developed solely by James Silva and was intended to be an Xbox Live Indie Games release, rather than an Arcade one. The game was far smaller in scope at the time — 20 minutes in length, according to the developers — and it relied on the classic video game trope of the male hero setting out to rescue the damsel in distress. Two events occurred during development that prevented that version of the game from being released. First, it made the jump to XBLA, necessitating a major shift in its scope. Second, James Silva and Michelle Juett fell in love and got married. Those events led to Ska becoming a two-person team, Charlie Murder getting a whole lot bigger and Kelly becoming playable.

James Silva shied away from specifically identifying Kelly as an in-game embodiment of his wife, instead choosing to focus on the game’s transition away from XBLIG and towards XBLA. “Regarding Kelly’s evolution, I think it’s important to bring up how small of a game Charlie Murder was originally intended to be,” he told XBLAFans. “It was a small game with small ideas, like mash X to win, insert virtual quarters to continue, and kill the last boss to rescue the your [sic] girlfriend. And small ideas do have their place, in fact, many very critically successful indie games follow a very familiar pattern of small ideas with a mind warping twist. But Charlie Murder was fleshed out into a big game, its characters became — at least in my mind — actual characters, its story became a deep and sometimes personal thing, and ‘save your girlfriend’ was shed, becoming instead a saga about fame, jealousy, guilt and redemption.” 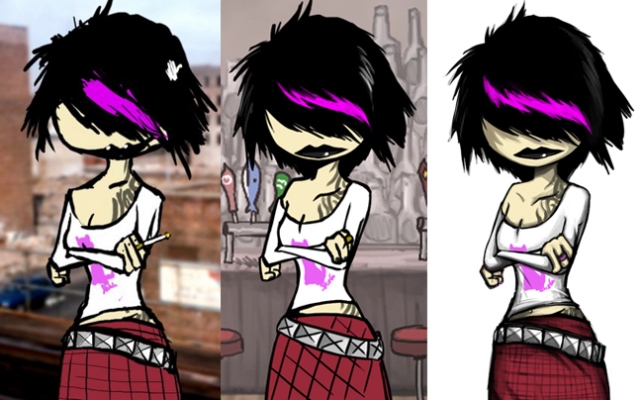 Back to the scene of the crime

So Kelly is a multitalented musician and a businesswoman. She may not play a sexy instrument in Charlie’s band, but her role is larger and more important than some have given her credit for. But what about that hotel scene? It still seems like a harmless joke at best and belittling towards women at worst. It’s neither. It’s all just a matter of misperception.

“The hotel trashing scene seems to be a misunderstanding,” explained Juett Silva. “If you aren’t playing as a band member, they’re just in the room ALL feebly wandering around trying to destroy stuff. If they happen to destroy something, that’s random and if they aren’t able to then that’s random too. No character is purposefully weaker than another. Each time will be different. It’s weird that’s what was interpreted. It actually took a lot of my energy to stop myself from shouting SOMEONE IS WRONG ON THE INTERNET and trying to correct them.” [Editor’s note: emphases are Juett Silva’s]

The other half of Ska Studios also opened up and shared his feelings about the PAR review of his game. And he had some further words of clarification about Kelly being a tambourine player, too. “Yeah, that PA Report writeup was hard to read. To me, I know all of the characters, and I know what their roles are, and none of the roles are for the sake of being mean, or sexist, they just are,” James Silva told XBLAFans. “Kelly is Charlie’s girlfriend, but she’s a small business owner and the only one with any organizational skills and business skills, so her primary role is manager of the band (basically this only comes out in the credits of the good ending), but she adds backup to a lot of the songs.

Transforming a one-time damsel in distress into a full-fledged playable character that’s at least partially based off of your wife was likely a tough transition to make, especially while also turning a 20-minute game into one that lasts for many hours. Ska may not have pulled off the transition flawlessly, but it’s clear that the studio at least meant well; it even included a slightly deeper explanation of Kelly’s character for those who dig deep enough into Charlie Murder. Regardless of whether or not that resulted in a character critics could appreciate, it at least resulted in one its creators are proud of.

“I think the important thing for us to do is make games we want to play, make characters we want to be, make worlds we want to save,” said Silva. “People will draw conclusions based on experiences and trends, and we’re open to feedback, but the most important driver in our process will always be our own creativity.”

Considering the inclusion of a 50-foot-tall robot Sasquatch, kamikaze sharks with dynamite strapped to their bodies and one very confused half-hamburger/half-man in Charlie Murder, no one who’s played the game would accuse it of being driven by anything else. Perhaps after reading the Silvas’ explanation of Kelly’s character, no one will accuse the game of being “slightly icky” either.