Charlie Murder was developed by Ska Studios and published by Microsoft Game Studios. It was released August 14, 2013 for 800 MSP. A copy was provided for review purposes. Charlie murders. Charlie — in concert with the other members of the band of his namesake — brutally, bloodily murders undead and demonic foes by the score. Oh, he also skateboards, puts on concerts, drops acid, flies on a broomstick and does a whole bunch of other crazy crap. Mostly, though, Charlie murders. He makes a point of stomping on downed adversaries’ defenseless faces, sending their eyeballs and somehow-still-intact brains flying out of the noggins that contained them only a second earlier. He shoots, he slashes, he bludgeons, he punches — he murders. Such wanton destruction might prompt another round of those discussions as to whether or not those damn video games the kids play really have gotten too violent, whether or not they really are rotting gamers’ brains (at least they have the good courtesy to leave them in their respective noggins). It might do that, but it shouldn’t. It shouldn’t do that because the death and dismemberment is all so outrageous, so ridiculous, so…hilarious, that no one should take any of it seriously.

Absurdity is never in short supply in Charlie Murder. The two-person team of James Silva and Michelle Juett-Silva have distributed it with liberally enough here that Charlie Murder crashes right through genre convention, and, for the most part, keeps on rockin’. Silva once commented to XBLAFans that he had no need for a design document. It wasn’t entirely clear at the time how serious he was about that statement, but it’s obvious now that there was at least some truth to his words. It’s impossible to believe that anyone at Microsoft told the Silvas what they could and could not do when designing their game. In fact, it’s hard to believe that they themselves were even capable of as much. Yes, the tried-and-true brawler staples are all here, but so are myriad off-the-wall ideas that somehow come together in a way that (usually) works. Charlie Murder isn’t the first brawler to load up on crazy — but it is one of the best. 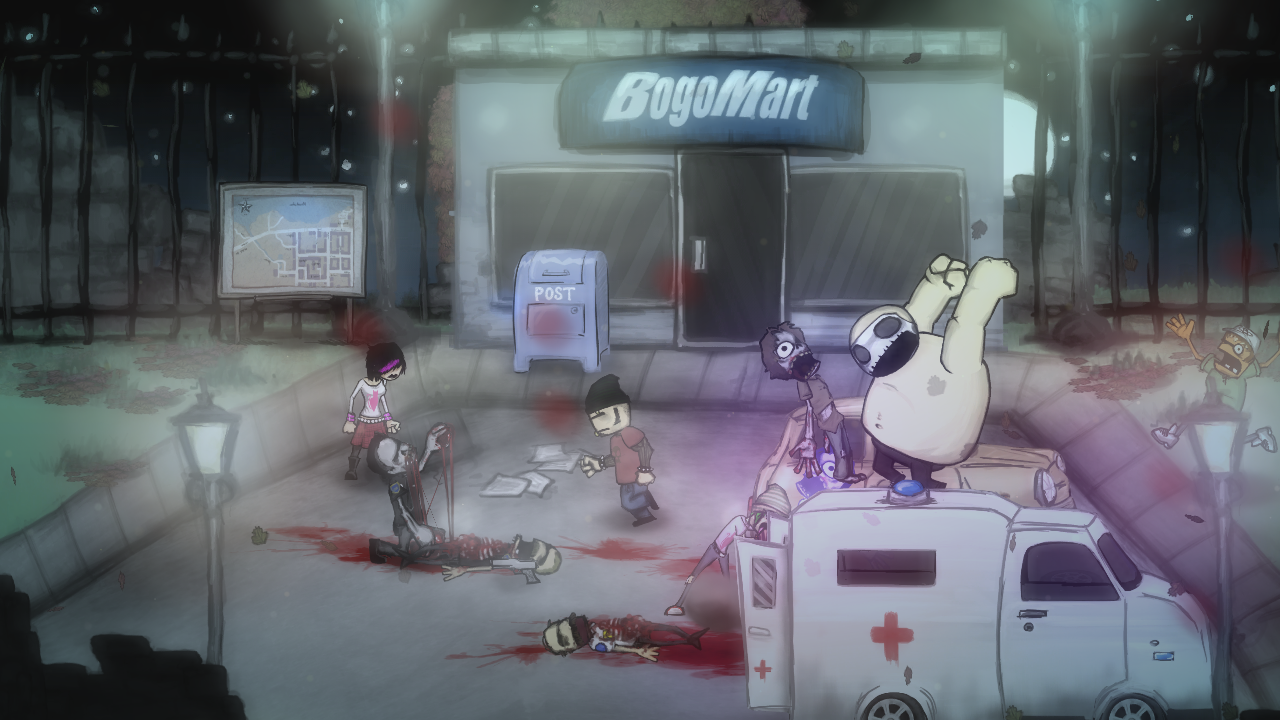 What the hell?! — A punk rock ode to lunacy, Charlie Murder gets a little crazy in the opening moments, gets a lot crazy in the middle and somehow never runs out of new ways to entertain the player while he moves from left to right beating the crap out of everything in sight. If you’ve played dozens of co-op brawlers in the past and feel like you’ve seen everything the genre has to offer, you haven’t. It might be the — Dr. Evil, eat your heart out — sharks with dynamite strapped to them that make you realize that. It might be the acid trip with the surprise ending that’s as hilarious as it is horrible. It might be the part where you take to the skies a la Harry Potter and do battle with a 50-foot-tall Sasquatch that isn’t quite what it seems. Or it might be any of dozens of other inspired sections of gameplay that does it for you, but you will realize sooner or later that this is a brawler that is nothing if not original. There are a few random interruptions to the brawling that fail to add anything to the experience, but most of the capriciousness somehow works.

CaSILVAnia — A co-op beat-em-up that was informed by a single-player action-adventure series may sound like a strange choice, but Charlie Murder somehow does manage to be a loving send-up of Konami’s Castlevania series. In addition to a pair of the bad guys aping Dracula, there is a large, ongoing quest that’s completely optional and is directly inspired by the Belmont clan’s adventures. This means a somewhat Metroidvania-like penchant for voluntary side treks, which include some of the game’s best areas and boss battles. It’s possible to barrel through the game in a straight line and skip all of the side content and still get many hours of enjoyment out of Charlie Murder. Don’t do that. It’s worth it to explore every inch of Ska’s brawler. Then it’s worth it to do it again.

Getting the band back together — Charlie Murder is one of XBLA’s finest co-op experiences. It’s a game that seems to have been flying under the radar of many despite its multiple years of development time and countless video game convention appearances, so your friends may not be aware that their next multiplayer obsession is about to land on XBLA. Be sure to let them know, if for no other reason than for the laughs that come from cooperative attacks that allow two players to wreak havoc on the baddies by playing the drums on the back of a bucking hellhound. Yeah, that happens.

Rock on, Charlie Murder — What would a game about a punk rock band be without great music? It’s hard to say, because Charlie Murder doesn’t answer that question. It won’t be long before you’re humming along to the overworld map jingle while playing and screaming the only coherent lyrics (“Charlie Murder”) of the game’s main song in the shower…and, naturally, mumbling your own made-up lyrics through the rest of the tune. Solo tour — The best rock stars are usually at their, well, best when their band is behind them. For example, do you remember that time when The Who’s Roger Daltrey (youngsters: ask your parents) had a bit of a solo career in the ’80s? Yeah, neither does anybody else. OK, in fairness it did have a few highlights, but it paled in comparison to the experience the full band had delivered throughout most of the ’70s. A band needs band members, and those members need chemistry. Similarly, a brawler needs players, and the brawler experience is at its finest when those players have chemistry. In co-op, everyone can’t be the lead singer in Ska Studios’ band; players must select different characters and leverage their unique strengths and abilities to maximize the takeaway. Charlie Murder proves to be a stellar multiplayer game, especially when played with friends, but it loses much of its appeal when played in single-player mode. The same could be said of virtually every beat-em-up ever made, but that doesn’t make it any easier to overlook in Charlie Murder.

I’ve fallen, and I can’t get up — Anyone who has ever played a game of Charlie Murder‘s ilk will recall experiences of getting pinned down after leaving themselves exposed and being subsequently beaten to a bloody pulp. If you don’t play with extreme caution this issue will pop up from time to time, especially during solo play when there’s no one to come to your rescue. The game’s difficulty is mostly perfect, providing enough challenge to keep things interesting but not so much as to turn anyone off from loading up on health items and coming back for more after dying — and you will die — and having to restart a level from the beginning. Sometimes, though, the perpetual cycle of standing up and getting beaten right back down again can be irritating. 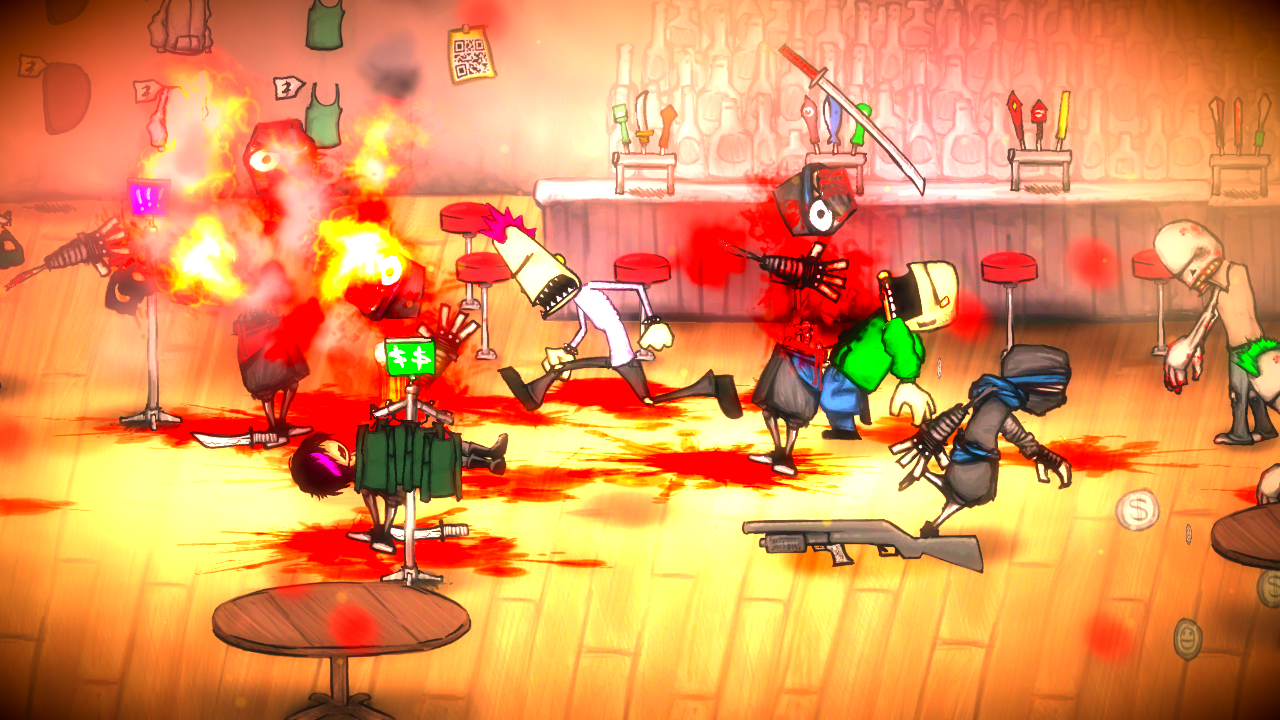 Charlie Murder is not the first XBLA game to bring sublime absurdity to the cooperative beat-em-up genre, nor is it the best. Forget about what it isn’t, though, and focus on what it is: a game that is unapologetically indie; a game that refuses to stick to a script; a game that rarely takes its players down an expected path; and a game that should be many Xbox 360 owners’ new cooperative gaming obsession. Charlie Murder is proof that a whole bunch of senseless crazy can make for a whole bunch of perfectly sensible fun.