We here at XBLA Fans love ourselves a good platformer. There’s dozens of them out there, and we’ve played them all and loved them… well most of them. Games like Limbo and Braid often stand out as those sort of out-there platformers with a lot of quirk to them. Looks like we’ll be able to add Pid to the list of interesting, strange and unique platformers soon to grace the digital download marketplace. However, as Pid does leave one filled with wonder and intrigue, we took it upon ourselves to seek out Pid‘s developers, Might and Delight to acquire further elucidation on the cosmic entity that is Pid.
XBLA Fans: Might and Delight can be read a million different ways, but it’s far more likely you guys had a pretty good idea of what your new company’s name means. Care to share?
Might and Delight: We wanted the name to be rich in contrast and something that makes people smile when they hear it.  There’s something silly and an 80’s attitude in the rhyme when you say it which we really liked.

This feeling is contrasted by the logotype design; classic, rigid and looks more like a family law firm— We fell in love with that combination.

XF: How did Might and Delight end up making an XBLA game as your first original game?
M&D: Firstly, to clarify, Pid is at the moment a self published ‘Original’ title for the Downloadable marketplace which we plan to release cross platform.
Basically, Might and Delight came together about a year and a half ago with the idea to develop and pitch retro remakes; since we had such a great experience working with Capcom on Bionic Commander Rearmed. We wanted to make something that really reflected that time and we love retro arcade. We pitched a lot of really cool remakes but the Industry was shifting and nobody really was taking a chance on us. So, we decided to create our own unique retro-esque platformer and that is how it was born. 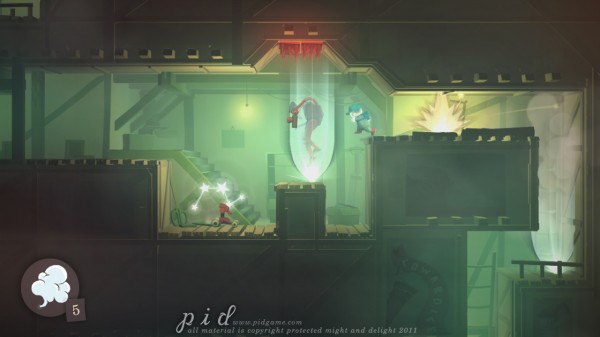 XF: Members of the Might and Delight team worked on Capcom’s “Bionic Commando: Rearmed”, how is their experience playing into this new XBLA title and what roles are those members filling?
M&D: In the beginning, when we founded Might and Delight, we didn’t know which members from ‘BCR’ would want to be involved. Basically, it started with 3 founders all whom were on ‘Rearmed’ and then we were able to reach out to the other core members; of course not everyone was able to come on board, from the original team, due to the industry climate at the time.  Currently, there is myself as Creative Director (founder), the Managing Director, the Producer, the Lead Tech/3d Artist and the Lead Animator(founder) who are at Might and Delight and all worked together on Rearmed.  Their industry experience, friendship and time working together has been invaluable in general; now they fill multiple roles on ‘Pid‘ and within the Company.  We have also expanded the team to 13 bringing some other exciting indie ‘up and comers’ to our Might and Delight family.   The great thing is that we are in regular contact with almost all of the old team and they really have been supporting us along the way —- which means a lot.

XF: There are a million things about this game that beg questions. However, by far the most demanding is the title. Why Pid? Admittedly it’s very fun to say.
M&D: ‘Pid‘ has been the working title for a long time. It’s light and has a nice sound to it. We came up with different incarnations of the name using the same letters like: Planet in distress and Peculiar ! destination.  Ultimately, we went with ‘Pid‘ it is easy to say and easy to spell.

XF: How did this pastel world with strange creatures standing three times the main character’s height come to be?
M&D: We came up with the graphical style because we wanted the backgrounds to have a lot of information. We want to show fun and charming places in direct contrast with the story and encourage player exploration using these devices.   Plus, It’s always been our ambition to make a game that dares to do something silly and creative – in a serious way. 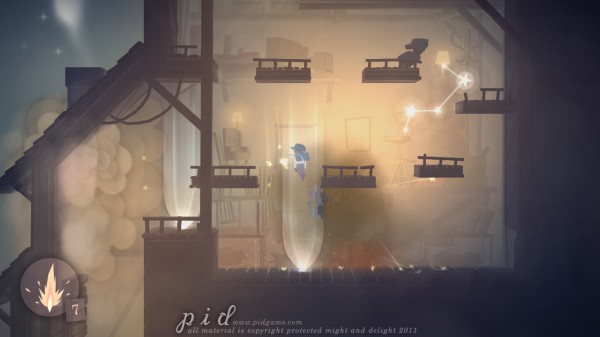 XF: Why a school boy? Because neon backpack straps would be cool? Be honest now.
M&D: Ha,ha. Honestly, we have created a world that is very strange and imaginative. The entire presentation and visual design of ‘Pid‘ revolves around playful, surreal and eccentric tones. Kurt’s ‘common’ appearance makes the ‘peculiarity’ of the world stand out and he perceives the world in the same way that the player does.  Kurt is a “normal” character and he is designed in this way so people could relate to him; it just makes sense.

XF: The main character seems to have a bow which shoots elevator-light, is this the only weapon/tool the players will get, or are there more?
M&D: The slingshot is one of the permanent items in the game. It really opens up new approaches to solving different gameplay obstacles; since it can reach areas that the normal beam cannot.
Our game is filled with ALOT of fun and useful items that are introduced in different areas along your journey through this peculiar planet…. but you will just have to play the game when we release this summer to find out all our hidden treasures.

XF: What role will the player’s backpack or otherwise inventory play? Are there shops, currency, and other traditional adventure style elements?
M&D: Absolutely. The backpack is the player’s inventory where all the items and trinkets that he collects during the adventure will be gathered. The stars are our in game currency, of sorts, that can be used to purchase gameplay items; such as tools, weapons and sheilds.  In addition, there are several story related items and other goodies to be found— if you take the time to look.

XF: Is this planet Pid takes place on a massive “room-based” world (ala Metroidvania) or is more mission based?
M&D: Even though the level progression is mostly linear, it’s fair to say that each part of the game will be very unlike the next; each level has its own distinct flavour.  There is a lot of variation and on some parts of the planet, Kurt is trapped in narrow room-like spaces, advancing puzzle by puzzle; In another, he can freely explore a larger enviroment with mulitple paths and non-linear structures.  We are really creating something challenging and different. 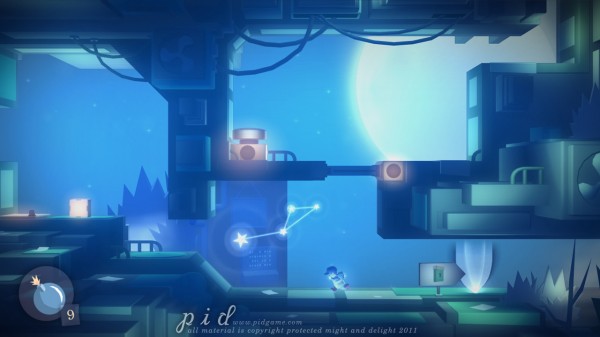 XF: How is health, death and saving handled in Pid?
M&D: You can only take one hit in ‘Pid‘.  But, there are several inventory items that the player will find or exchange (‘star currency’) that give additional lives and/or ways to escape danger.
We really wanted to create a system that encourages the player to advance through the levels with care and thought.  However, in more actionpacked parts of the game, we hand the player more weapons and life, to stimulate a faster run and gun way of playing.

XF: Does the sort cheery, effervescent (with a hint of mystery?) theme featured in the announcement trailer permeate the entire game?
M&D: That’s a great way to define it actually. There is a tone of melancholy in all the fiction which we hope players will sense but definitely the style/theme you see in the trailer is very representative of the game experience.

XF: What differs between coop mode and single player? Are they separate story lines, or just missions, etc.
M&D: It’s the same adventure in coop. However, the experience of playing that adventure will be extremely different. We didn’t want to create an easy coop mode by giving the players twice the tools and strengths.

In the single player campaign, you have two beams to solve puzzles and play around with but in 2 player-mode you need to share the two beams with your friend; one beam each. This makes our coop a tough challenge that forces players to really communicate – not a casual walk in the park per say.

That wraps up our interview with Might and Delight on their adventure-style platform puzzler, Pid! There’s clearly a lot to this game and we’ve only scratched the surface. For a good look into the gameplay of Pid, check out the awesome announcement trailer, complete with fantastic theme music and hints of things to come.