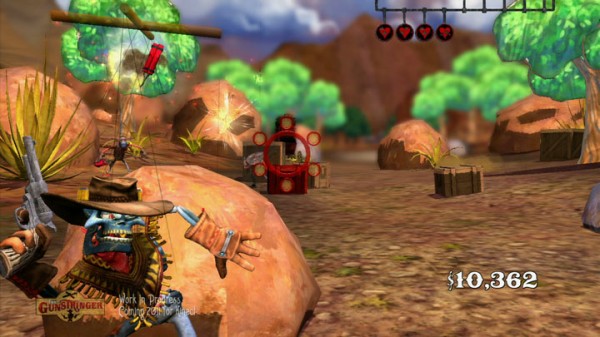 Sophia Tong caught up with Twisted Pixel’s Michael Wilford this weekend at the Microsoft Event.  Wilford described their desire to make a unique Kinect title.  “We tried to do something a little bit different with Kinect, we’re making a shooter.”  He also set up the game’s plot, stating “It’s about this undead marionette puppet that you control.  He comes back from the dead after being betrayed by his posse and you’re out for vengeance.”  Wilford went on to describe the controls for the game.  Movement is handled with the player’s left hand.  Moving the arm up quickly will cause the character to jump, and other movements will direct the character’s walking and running.  The right hand controls the character’s pistol.  An on-screen reticule shows where the player’s hand is aiming, while a flick of the wrist fires the gun.  Wilford described the controls as a “little bit like Rez or Panzer Dragoon“. 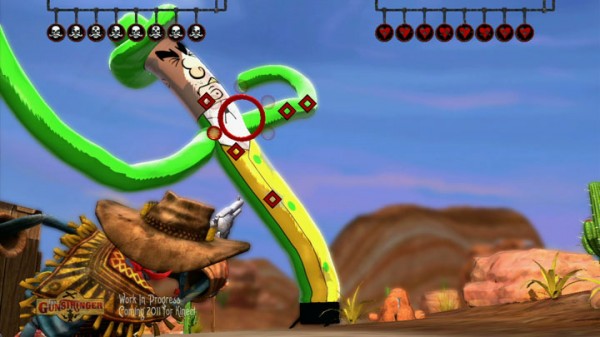 Randy Nelson wrote an in-depth preview of the game.  Describing the game’s opening moments, he said:

The Gunstringer kicks off with an audience — of real people — sitting down in Austin’s Paramount Theater to watch a puppet show, inter-cut with scenes of the Twisted Pixel crew rushing around with props for the opening scene: the revenge-fueled star of the game rising from the grave. He did just that when I reached out my left hand and yanked him out of the ground.

Bill Muehl, Game Director on The Gunslinger was interviewed by Kinectaku’s James Newton prior to this weekend’s Microsoft Event. In the interview Muehl described the origins for the game’s protagonist:

“The Gunstringer character is from the mind of Josh Bear, Twisted Pixel’s Creative Director. He was having lunch with our publisher and he saw the profile of a skeleton cowboy marionette in his quesadilla, like some people see Jesus in their toast, and The Gunstringer was born. Most of that sentence is actually true. The western theme followed the whole cowboy idea and the skeleton marionette in a stage play led to the whole hand-crafted style of the props and characters.” 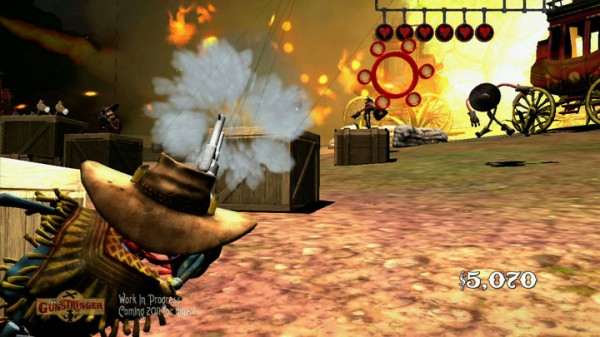 Perhaps one of Twisted Pixel’s favorite compliments from the industry came from Cliff Bleszinski, Design Director at Epic Games and the man responsible for the Unreal and Unreal Tournament games as well as the Gears of War series.  Posting via his Twitter account Bleszinski said “Just played Gunstringer. Damned cool and intuitive. Watch this one!”  Twisted Pixel later retweeted Bleszinski’s comment, adding simply “Wow, cool!”

There are so many more folks that have posted about and been impressed with The Gunstringer.  What you see here is just a sample.  XBLAFans will be continuing to post information on the game, as will our sister site, XboxKinectFans.  You can also watch the game’s official blog for more information.  This may just be a decent reason to buy Kinect.