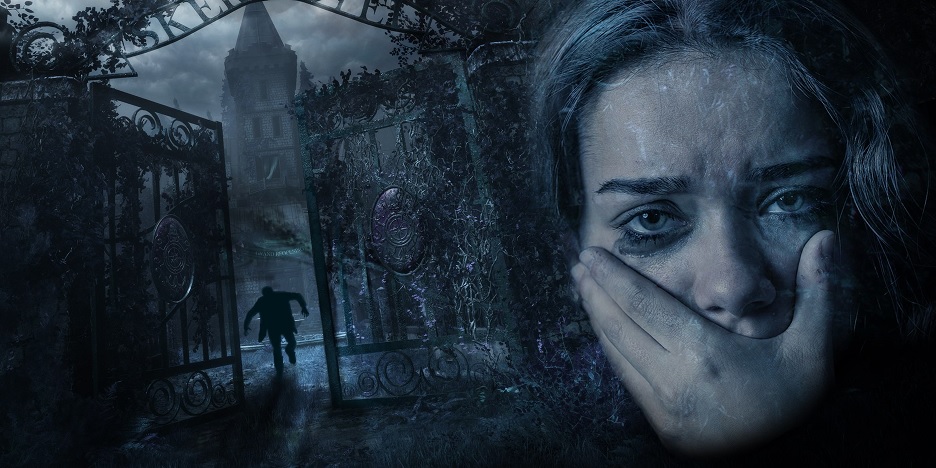 Based loosely on the novel of the same name, the story of Maid of Sker is set in the 18th Century featuring a character named Thomas. He is led to a remote hotel where he believes the love of his life is. Here, the horrors start to unravel as he must attempt a rescue mission while a cult of people wanders the hotel. They are called The Quiet Ones because they cannot see and will be drawn to sound. You must use stealth to get around the hotel and avoid making noise in order to stay safe. You have no way to attack the men but will have a defensive sound device that can stop them in their tracks as you flee. An eerie atmospheric adventure awaits your check-in, but there is no time for you to check out.

Horrifying Immersion — There’s an unsettling feeling while walking the hallways of the hotel. The game is designed around sound. While you’re listening to footsteps and trying to stay quiet yourself, you will feel helpless if something goes wrong. Music and sound effects are above average and deserve to be listened to through good headphones. The hotel is run-down and spooky, looking like a lot of bad things have happened there. And they have. The true horror is knowing you’re basically alone, with no means of disposing of the enemy. In other survival horrors, you can usually dispatch the enemies, clearing an area that’s always a safe place to go back to. But here, backtracking means you’ll be seeing the enemies you had already snuck past. Late in the game, you’ll even meet a character much like Nemesis from the Resident Evil franchise. He stalks you and it doesn’t matter how quiet you are. I don’t like those chase scenes, so I was glad it didn’t last long. It’s actually a very short adventure, maybe taking you just a few hours or more to complete. Yet, somehow it feels like much longer. The constant struggle to be sneaky and slowly get to the next area feels like forever. This is how immersion works; it captivates you in another world and makes it feel like you’re really there.

Tread Softly — Enemies cannot be killed or disposed of. You have to avoid them or use a sound-based defense tool against them. Stealth is your only option, and avoiding these evil cultists is your only option. For most of the game, you’ll likely be crouched, being careful around every turn. Once you see the enemies, you must watch and learn their walking patterns — which are mostly a loop — but sometimes they steer off course. Because of the nature of noise, there are many things that will attract an enemy. Walking or running in the proximity of an enemy will cause them to chase after you. It’s a beautiful cross between stealth and horror, giving you that nervous feeling when you make a loud noise or have an enemy walking towards you and there’s a wall at your back. A unique use of the noise is the act of coughing. There are dusty areas in the hotel, and if you walk through them you start to cough, possibly giving away your position to the Quiet Ones. To counter this, you can put your hand over your mouth and hold your breath. You can’t do this for very long, so it creates panic to get out of the dust and away from the enemy. It’s quite scary to be noisy.

Replayability — Oftentimes, you finish a game and don’t feel the need to run through it again. After my first playthrough, I missed several items and achievements. Because the game is so short, the more you play it the faster you get. This just means there is even more reason to go through it again knowing what to do so that you can one hundred percent complete everything there is to do in the wretched hotel. It’s just a nice bonus to be able to enjoy second and third run-throughs.

Am I Lagging? — If you’ve ever used xCloud or any other similar streaming-based service, the first thing you always notice is the feeling of sluggish movement. It’s almost like a delay when you turn or move. There is a noticeable slowness when you turn your character. I was able to ignore it and forget about it after a while but only because I got used to it. In an immersive atmosphere, it takes away a little bit of the experience when you feel like you’re sluggish.

Stale Tale— Luckily there’s a lot of fun sneaking around the hotel. The actual story is nothing spectacular. I found it quite boring. There’s some backdrop of the creepy place and what’s going on but overall you’re just grabbing some things and heading to the final area. There are no self-reflections or “aha!” moments. You aren’t going to have any emotions towards the characters (well, maybe just the dog). I cared little about what was going on because I just didn’t like how it was unfolding. There weren’t any high stakes. I didn’t even trust the woman on the phone. Nor did I want to save her. My real goal was to get the heck out of there! In my playthrough, I was supposed to collect four items and I missed the very first one. For some reason, the game let me continue on and now I can’t go back to get it. So I was forced to get a good ending. That doesn’t make any sense to me, I should be punished for not collecting the items I was told to grab! Instead, I am rewarded for not following the objectives. I think I had grabbed it but had to reload and forgot to get it again (no auto-saving, quite the problem). If you’re wanting an awesome story that will make you cry, laugh, or show any other emotion besides fright, then you may want to look elsewhere.

For such a short game, the time seems to run in slow motion as you sneak around. There is no problem at all with the game’s length. Instead, the real struggle is with a lackluster story and movements. Besides these issues, everything else is brilliant. From the stress of being quiet to the chase scenes that leave you needing to take a small break in the comfort of a safe area. It feels like forever since I have played a good stealth game, and now I can say the counter has reset. The uneasiness of walking around the hotel with random jump scares and nerve-wracking sounds is quite remarkable. It’s also very replayable, with two different endings as well as lots of things to collect around the hotel. There are even achievements for completing it without getting hit and without saving. This is an all-around great title to own, especially for horror fans.

Maid of Sker was published by and developed by Wales Interactive on Xbox One. It was released on July 28, 2020, for $24.99. A copy was provided for review purposes. Read More
Outlast and The Whistleblower DLC review (Xbox One)

1 year ago
ReviewsFeatured ReviewsXbox One Reviews