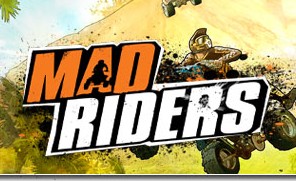 If you’re a racing fan then you’re already somewhat spoiled for choice on XBLA, with games like Hydro Thunder Hurricane, TNT Racers and Skydrift, and many more are on the horizon. However for all the diversity of those games, XBLA has yet to see an ATV racer. Techland and Ubisoft are changing that with the release of Mad Riders, a mostly fun racer that doesn’t quite have as much personality as its name would imply.

Event variety – When playing by yourself, you will no doubt spend most of your time playing the Tournament mode. This is split into eight different events, which themselves have five different races within them. These range from a standard race or time trial to a stunt event or waypoint-based arena race. While you do see the same environments and parts of tracks throughout the different events, most of them include their own unique routes, jumps and general feel.

Steady progression – As you play through the aforementioned Tournament mode you’ll earn stars for coming first in the various events, a maximum of three per event. Earning a certain amount of these will unlock access to the next tier of events. In addition to that you also receive experience points for every race. If you come in first, second or third you’ll get a chunk of points and will get a nice little bonus for all the tricks you do. As you might expect as you gain experience you will also gain levels; with each new level comes new unlocks. These consist of paint schemes for your ATV, new ATVs with better stats, and different outfits for your rider. Assuming you’re doing well these are doled out at a reasonable pace and give a nice sense of progression. 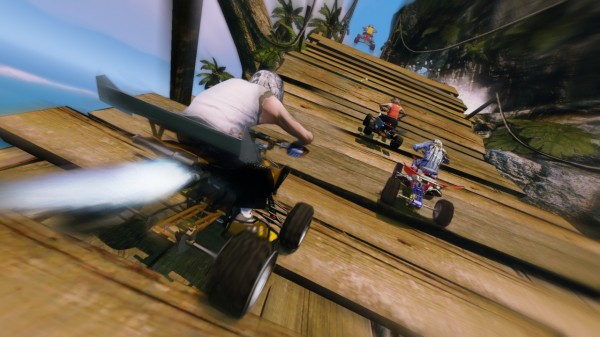 Need for speed – Once you start unlocking new ATVs the pace of races really picks up. More tricks will be at your disposal, allowing you to pick up more boost. During the second half of the tournament mode you’ll likely be boosting through 90% of the races. There’s a great sense of speed in these situations, though a certain uncontrol-ablity too. This can sometimes feel ok when you manage to wrestle control back just in time to take a corner and keep ahead of your opponents.

Mutliplayer integration – At XBLA Fans we are more aware than most of the issue that many multiplayer modes face: a lack of players after the first few weeks of release. It’s hard for a game on XBLA to hold an audience with so much choice for multiplayer gamers these days. Mad Riders has an excellent feature that tries to help alleviate this issue. While playing a single player event, if there is an open multiplayer lobby a prompt will appear telling you to hit left on the d-pad to join the multiplayer session. You’ll then drop into the lobby and be on your way. It works really well. If you try to join a little too late and the session is no longer available you’ll get a message telling you as such and can simply carry on with your race. It’s a great feature that will hopefully keep people playing, and one we hope to see in other XBLA game with a strong multiplayer component. 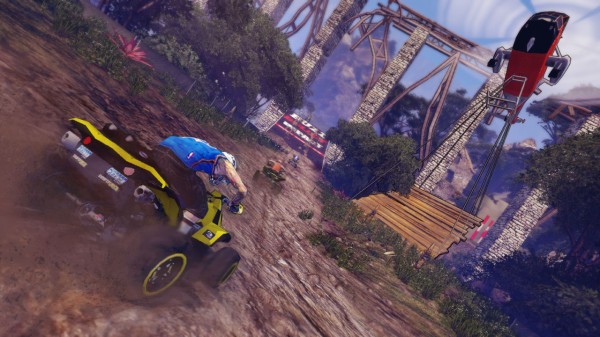 Respawn, respawn, respawn – It’s not uncommon for racing games to have a feature which will place your vehicle back on the track if you go too far off road or flip over. Mad Riders has such a feature but it is perhaps the most sensitive one ever featured in a game. If for example you land a backflip at a slight angle, even one you could easily recover from, you will get automatically respawned. Get a little too much air in a jump and go higher than the game would like? Respawned. Slightly nudge an obstacle while in the air? Respawned. Go two feet off the track while taking a corner? Respawned. Some of these cases are almost acceptable but there are also countless times when you will be respawned and have absolutely no idea why. It completely breaks any momentum you might have had and becomes immensely frustrating. What’s worse in multiplayer these respawns last longer and the time will increase with each one.

No style – Mad Riders does very little to make itself stand out, the most character you’ll see in the game are the outfits you unlock for your rider. You can dress as a gorilla with a baseball hat (worn sideways of course) or eventually as a Ninja with a couple of swords on his back. Outside of those though there’s no real identity, if you were sat down in front of Mad Riders you’d have trouble discerning it from just about any other ATV game out there. It’s a shame. Had Techland embraced the one spark of wackiness they put in the game it may have stood out from the crowd.

Mad tracks – Track design is fairly inconsistent, which leads to many situations where it’s unclear where to go next. Though there is signage that indicates an upcoming corner or jump, you’ll often be going so fast you won’t see them till the last second. There’s no logical sense to the tracks at times, even after going through a track multiple times in a row we still struggled to find our way. The tracks also often aggravate the respawn issue we talked about earlier, with later tracks encouraging large jumps and lots of tricks. This can then lead to even more situations where the game will inexplicably respawn you. We imagine discouraging players from using jumps, tricks and boosts was not the intention.

A minor annoyance we had came from a menu option for “Platinum Tracks”, if you select this you will be prompted to download a DLC pack. Now we aren’t entirely against the idea of day one DLC but a menu option that sits alongside the regular content and gives no indication it relates to DLC? We take umbrage with that. Integrate it when it has been purchased not before so it feels like something is missing. 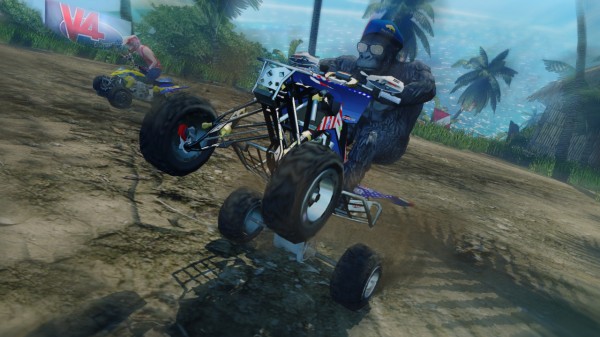 Mad Riders is a lot of fun and if it develops a healthy multiplayer community it could definitely have a lot of replay value. We found the issue with respawns to almost be a deal breaker, it led to a lot of frustration that could have been easily avoided. For 800 MSP there’s definitely a ton of content and enjoyment to be had in Mad Riders if you can overlook some of its bigger flaws.