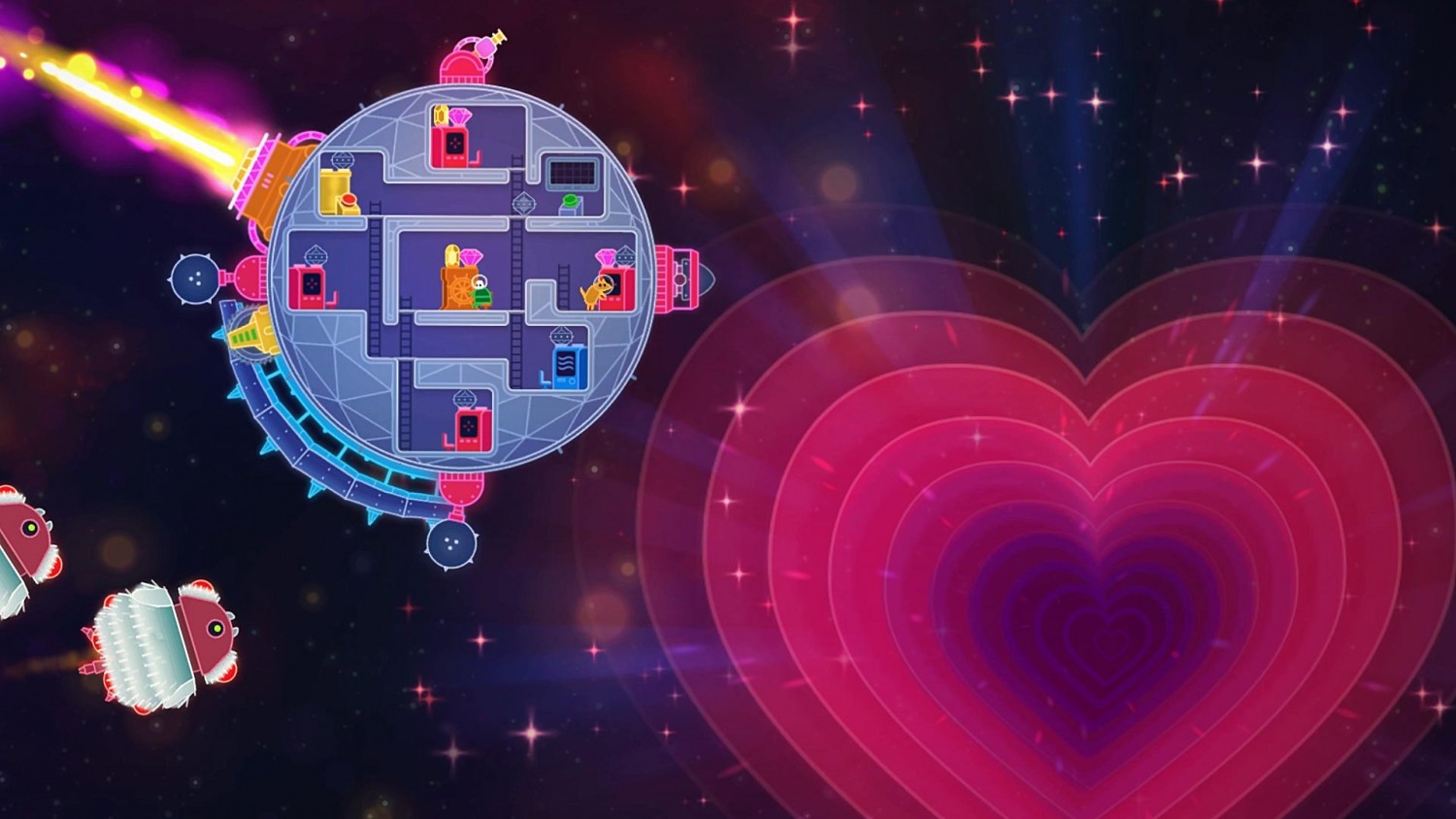 The moment you turn Lovers in a Dangerous Spacetime on it communicates to you that playing it is going to be a fun experience. The winsome sights and sounds that greet you in the menus will put a smile on your face and prepare you and a friend for the cheerful adventure ahead. Don’t have a pink neon Death Star co-pilot handy? Well, then you’re in for drastically less fun. Lovers can be played in single-player with an AI dog or cat partner and be an enjoyable enough time waster, but the excellence of its game design shines through only when you and a buddy are balancing communicating where you want the other to go with getting yourself where you need to be.

Your ship will be under near constant siege as you pilot it across the procedurally generated stages of Lovers‘ four worlds, and you won’t survive it in co-op playing only for yourself. Each of the unlockable ships has shield, navigation and battle stations, and you and your partner will scramble up and down ladders to get into the best positions possible to fend off threats coming in from all sides. It feels as if you’ve been placed inside an undermanned tank flying through a space war; your ability to perform as a tandem under pressure will be tested, almost prohibitively so in later levels. You and your co-pilot will inevitably grow frustrated and bicker with each other. When you complete a stage, thereby freeing imprisoned space animals and restoring some love to the galaxy, however, you’ll breathe a sigh of relief, smile and start the next stage. 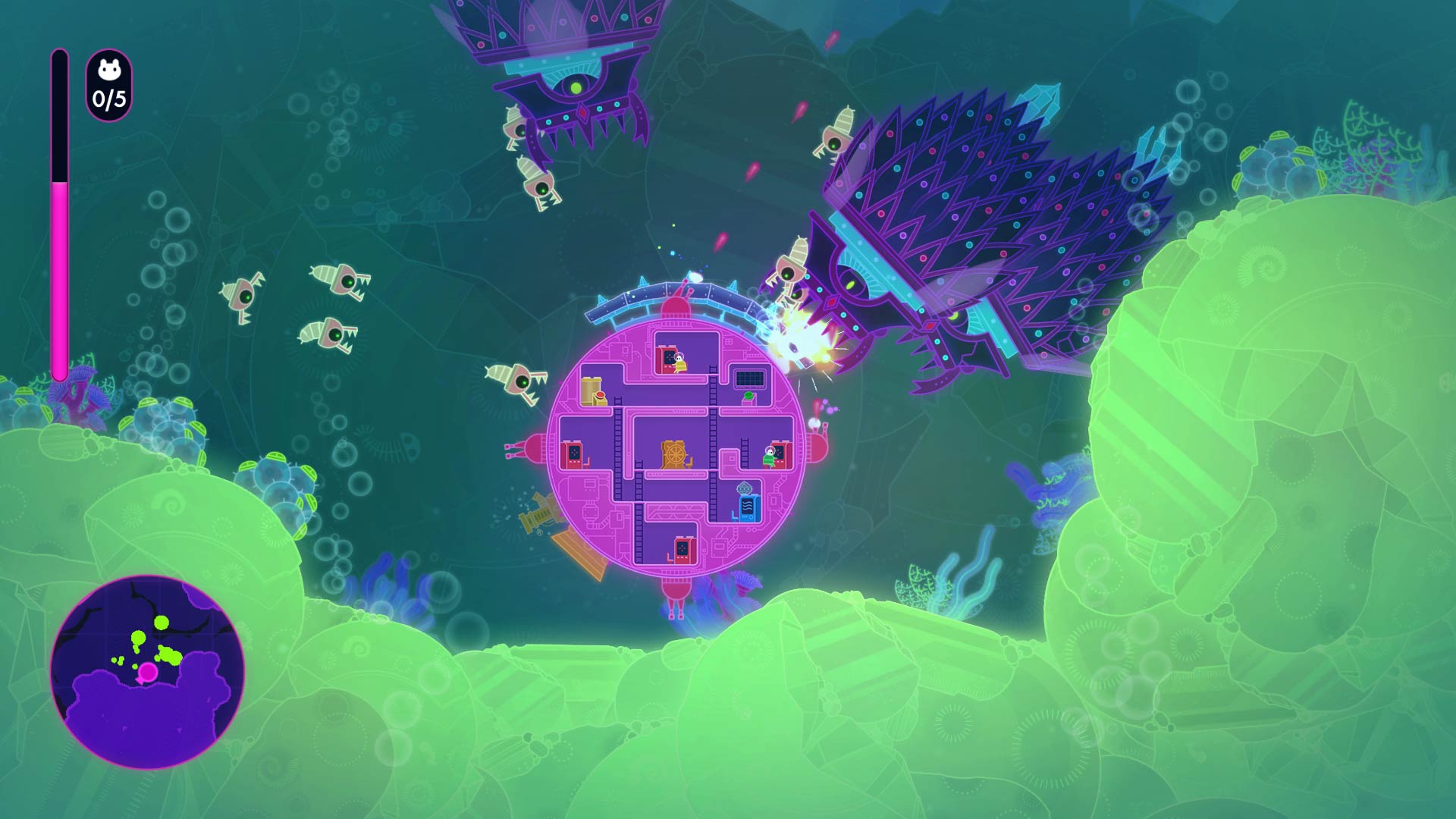 An out-of-this-world idea — I don’t remember the last time I played a game like Lovers in a Dangerous Spacetime, because there is no other game like it. Reading that a co-op space shooter is truly worthy of the descriptor “unique” might raise an eyebrow. But the one thought I couldn’t escape during my time with Asteroid Base’s title was that I’d never played anything else like it. An entire game based around two players controlling a handful of ships — additional ones are unlocked as you play — while constantly switching between offensive, defensive and piloting controls is one of those ideas with such an immediacy of gratification that you won’t believe no one else thought up this seemingly basic concept before. They haven’t, though; you’re not going to read any reviews stating Lovers in Dangerous Spacetime is like Game X meets Game Y. Asteroid Base wrote with its very own alphabet here, which is exactly what gamers and the press are always asking the industry to do.

Giving and taking orders — A great many games have co-op modes, and a decent many of those are optimized to play best with one or more partners. Few succeed at this endeavor in the way Asteroid Base has. There is no chance you will advance far in co-op mode without direct and regular communications. Only one person can fly the ship at a time and only one person can control the shield at a time. And even though there are multiple weapon stations on each ship, each has a limited radius in which it can deal damage, and enemies are not going to approach one at a time from the same direction like in a bad samurai flick. Stress builds as the ship takes damage and someone navigates away from where you want them to go or isn’t able to get the shield in the best position. Only by clearly vocalizing what you think needs to be done and responding quick and appropriately to directions can you and a friend restore love to the galaxy.

Sights and sounds — I’ve mentioned already how welcoming Lovers‘ art and music direction are. The upbeat menu music will make you smile as it hints at the type of game you’re about to experience. In game, there’s more to love than just the music. The sound design is exceptional, with the comical whimpers of imprisoned bunnies, frogs, etc. inducing chuckles every time but also making you feel like a legitimately horrible person if you’re unable to save them. Visually, your Death Star-like ship is the center of attention, of course, and it’s a battlestation flamboyant enough for David Bowie, whose Space Oddity the team has liberally riffed on in press releases and marketing materials these past years. My personal favorite sight, though, are the globules of water that sometimes make up their own satellites and other times encase solid terrain. Some enemy ships and firepower pass through these orbs of water, but some are stopped dead in their tracks upon impact making for games of aquatic peekaboo. 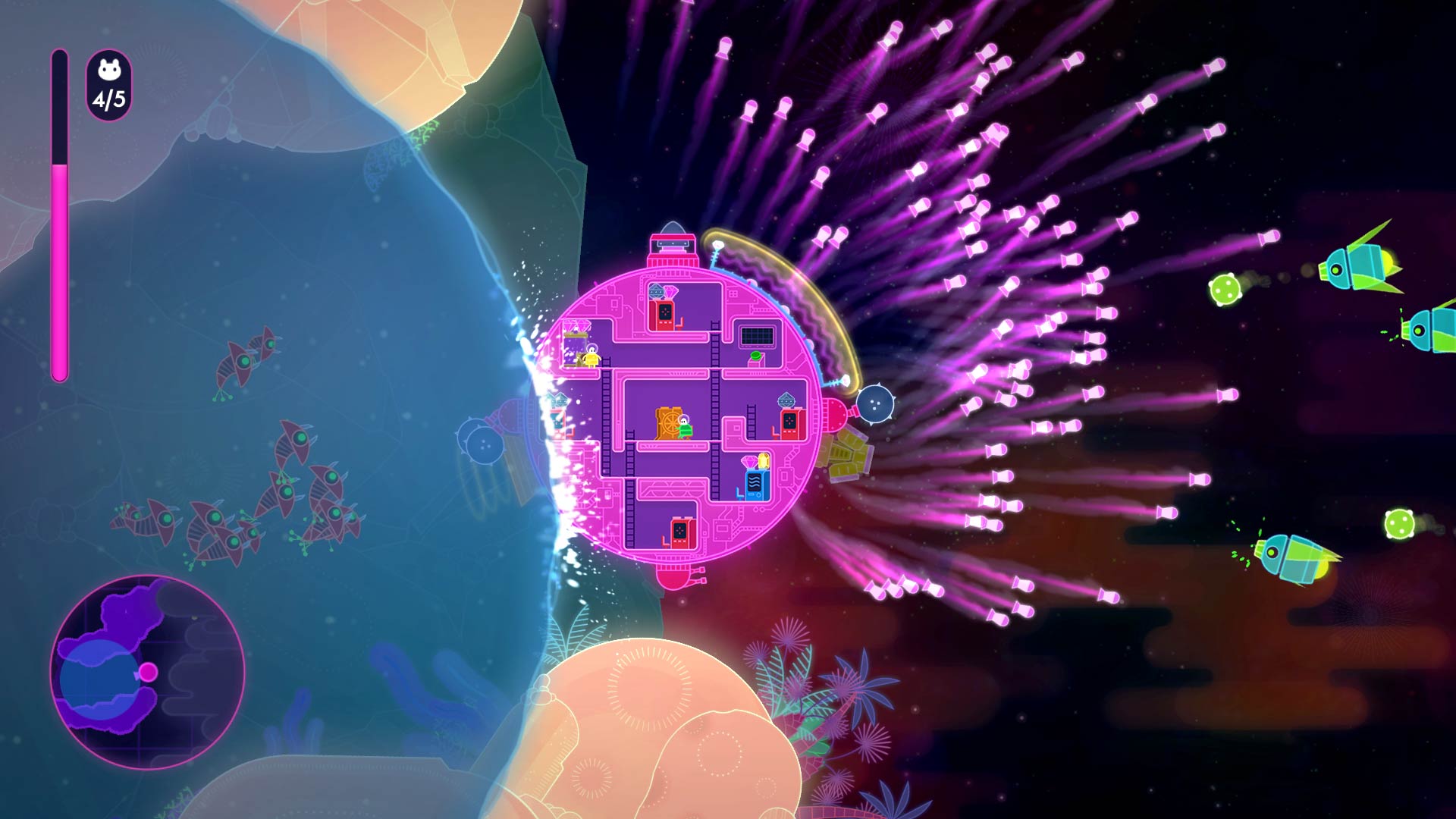 Did I beat it? — Though a representative for Asteroid Base assures me no one — play testers or fellow reviewers — encountered the problem save me, a single glitch did hamper my enjoyment of Lovers. The game froze up on me and did not save my progress after my play session ended when I completed each of the last few levels and final boss. Achievements were unlocked as was the path forward to the next level, but I had to exit out and manually select the next level from the main menu. Worse, the animals I had saved, ship upgrades I had unlocked and my world progress were all erased when I turned off my Xbox. The next time I played, the glitch magically corrected itself, allowing me to complete levels without issue again. Asteroid Base is working to remedy what they believe was a temporary issue with my Xbox writing the save to the disc, but it’s possible neither they nor anyone else will be able to replicate it. Still, it happened, and it was particularly annoying given that Lovers‘ late stages are somewhat arduous.

Spacetime, not cyberspace — If you can’t get a friend to play with you in person you’re going to be playing Lovers alone; there is no online co-op. Asteroid Base cites the fact that it’s a tiny studio with a lone full-time programmer as the reason for this omission. It’s an understandable reason, and it’s certainly preferable to have the excellent game the studio ultimately produced rather than one with online play but shoddy netcode or one with other concessions made in order to fit in online play. But that doesn’t make it any less unfortunate that you can’t play Lovers over Xbox Live. 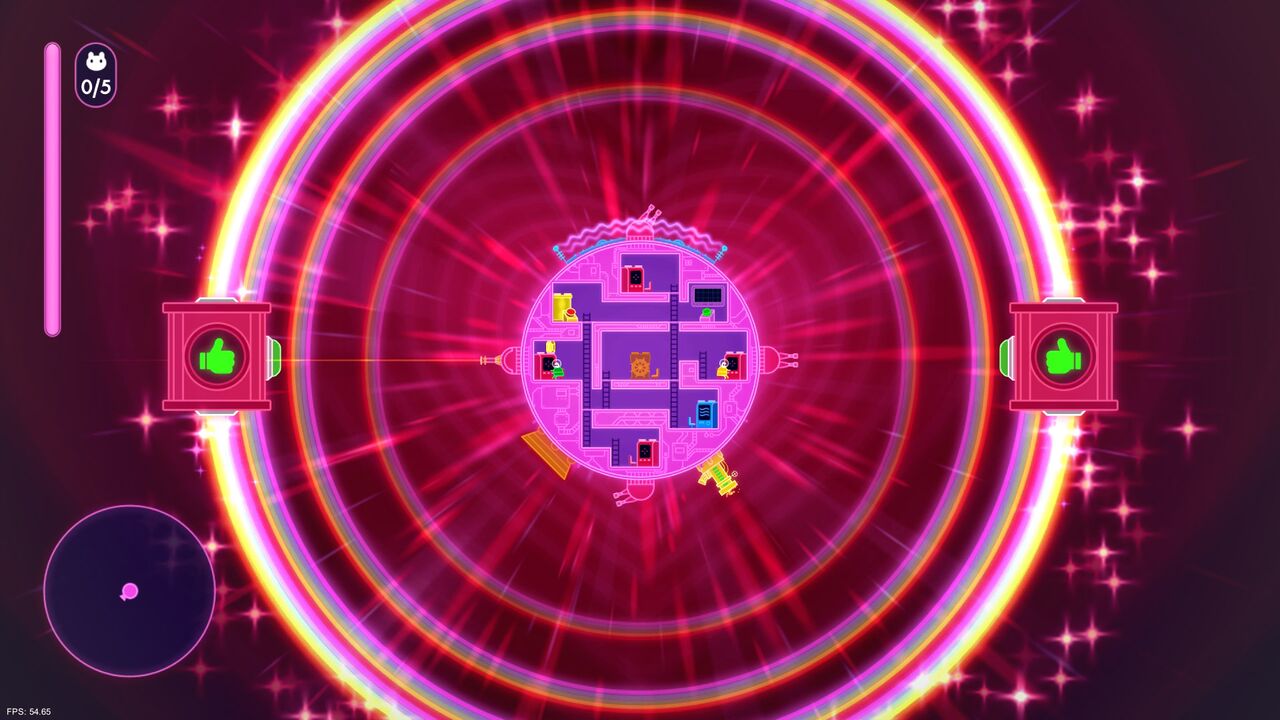 Lovers in a Dangerous Spacetime is spectacular fun with a friend but considerably less so without one. You can’t rely on Microsoft to provide a friend for you, either; you’ll have to convince one to join you on your couch. If you don’t already know someone eager to rescue space bunnies with you, though, you should find and convince someone. Teamwork doesn’t get much sillier or more serious than it does here — nor does it get much more entertaining or original. 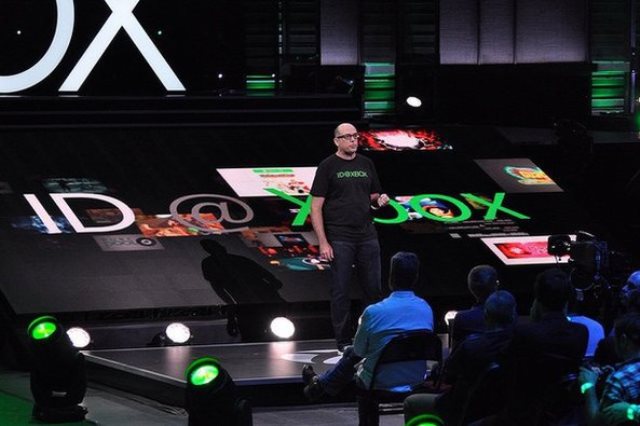