With the nights drawing in and the party season beginning to ramp up, Microsoft has made a wise decision in ensuring that Knight Squad launches as the main Games With Gold freebie offering in the run up to Christmas. Positioned as a hybrid between Bomberman and Gauntlet and supporting up to eight players, Knight Squad is an absolute dream for multiplayer gaming, especially when friends and family gather around the same television.

As the Bomberman/Gauntlet reference suggests, Knight Squad is played from an entirely top-down perspective in single-screen arenas. It’s a well-featured game, with nine surprisingly varied modes crammed into the base offering and four more included in the “Extra Chivalrous” day one DLC. The gameplay is incredibly simple with only a single button used (attack), but don’t let that fool you: there are plenty of gameplay nuances. Swinging the knights’ basic sword, for example, requires perfect timing to ensure it lands true, and those who run into combat hammering the attack button usually end up losing. 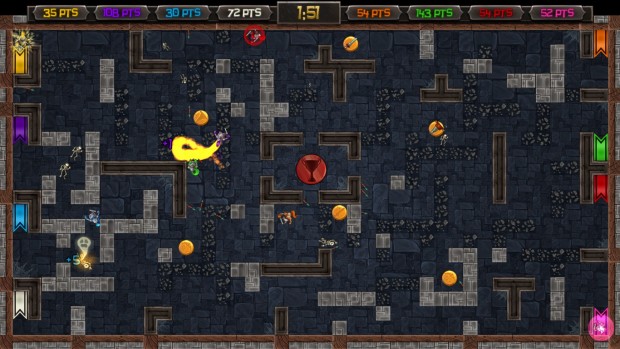 Knights in — Gather your friends and family and tell them to bring a pad, because Knight Squad is definitely best when played locally with lots of people you know. With support for up to eight players (bots will fill any gaps) and simple, pick-up-and-play gameplay, this is arguably the most inclusive game on the Xbox One to date. The wide variety of modes ensures variety and longevity despite the simple gameplay, and there are team and and objective modes included to help balance things when players bring with them a mixture of gaming experience or if everyone wants to team up against the AI.

Knights out — If you struggle to muster a large number of local players — or even if you don’t– you can jump into games with up to seven other people from around the world. Playing solo against opponents via the internet is fairly entertaining, but Knight Squad is still exponentially more enjoyable for each human you have in the room with you to share in the highs and lows of victory and defeat.

Suited up — An occasional problem of past Bomberman games has been one of repetition, but Knight Squad features such a wealth of modes that it basically never becomes boring. The weapons and power ups are also well balanced, meaning that in most modes, the games will end up pretty tense right to the end. 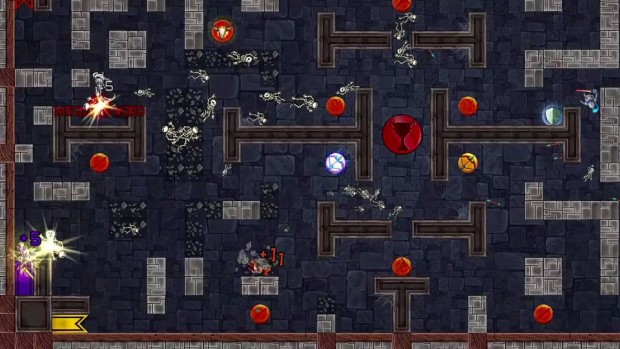 Lonely, lonely knight — Unfortunately, whilst it is completely functional and equally well-featured, Knight Squad isn’t much fun when played alone. The AI bots do a fine job of fulfilling their roles in each and every mode, but they don’t punch, slap or distract you like good friends do, and they don’t throw their pads down and tear their hair out when you beat them either. It’s just not quite the same when playing alone. In addition to all of the base modes featured in Knight Squad, the game also includes a decent challenge mode with six increasingly difficult score attack type stages that lone players can focus on. To be fair, this mode offers the welcome opportunity to practice in a non-competitive environment with the added motivation of online leader boards. Considering that most XBLA Fans readers likely have an Xbox Live Gold Membership, many of you will be able to pick up Knight Squad for free this month thanks to Games With Gold, and there’s absolutely no reason why you shouldn’t do that, even if you are exclusively a solo player. For those without a Gold Membership, I still recommend Knight Squad wholeheartedly if you enjoy local or online multiplayer. The only people who probably shouldn’t consider Knight Squad a worthy purchase are those with Silver Memberships with no interest in multiplayer.