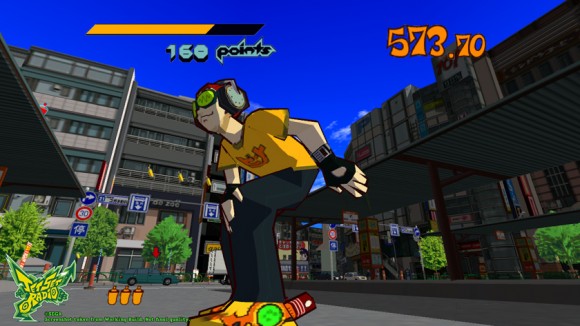 Wicked port – There’s something to be said for a job well done when HD-remastering games. Perhaps it’s the cel shaded art, or perhaps SEGA’s just really experienced at the process by now, either way Jet Set Radio is a fantastic looking port. If it weren’t for old models and level design limitations, it’d be tough to tell this game from Jet Set Radio Future without actually playing it. The music is back, the visuals are fresh, couldn’t ask for much more when it comes to this remix.

Cool locations – We’ll get to the issues with the floor plan in a bit, but the actual areas featured in Jet Set Radio are pretty darn rad. A busy bus-station reminiscent of Shibuya (aptly named Shibuya-cho), the dark and rugged streets of Benten-cho and the cramped residential district of Kogane-cho combine to make up some very interesting, mostly-fun areas to explore and observe. When each zone is fully open (something that doesn’t happen until later in the game) and level transition is seamless the game really delivers a strong sense of flow and momentum.

Rockin’ soundtrack – Just had to give a quick shout out to the soundtrack to Jet Set Radio as well as the actual Jet Set Radio element of the game. The soundtrack is freaking amazing, a great period piece for the times, and the transitions as the songs change keep everything moving forward. DJ Professor K, the absolutely ridiculous character who runs the pirate radio station Jet Set Radio within the game is a fantastic narrative framing device- his setups and transitions between missions are enough to keep you going beyond any frustrations you incur while playing. Inconsistent level design – When you enter an area for the first time, you have to do three missions in three different sectors of the level. These areas are small, confined spaces which often lead to transitions to other parts of the map but are blocked off. Many of these areas really don’t sustain gameplay very well on their own, so each of the first three missions in an area is more like an extended tutorial. Some levels work well on their own, some are too small, some are needlessly big or vertical; there isn’t enough cohesion between the elements in each individual sector.

Infuriating opposition – The majority of the missions in Jet Set Radio consist of finding red arrows on the map and tagging them. Spray-paint cans are littered throughout the level usually in logical areas that actually encourage flow and momentum- the game at its finest. Unfortunately, the graffiti can only be sprayed while standing still. This wouldn’t be that bad if there weren’t constantly a myriad of policemen who give chase anytime and all times they can. The later enemies, referred to as numbered assassins, are so unjustifiably annoying and intrusive it’s mind-boggling- the final Kogane-cho mission’s assassins might incite baby-punching.

Momentum disruption – Beyond the police, assassins and even trains and cars (the drivers of which have no concept of pedestrian right-of-way) running all over most of the levels, anything that’s not grinding or skating can be pretty frustrating. Kogane-cho (note: Kogane-cho is a cool area, but it’s got the worst gameplay outside of the sewers, hence the harping on it) is littered with roof-top graffiti spots and general pathways involving janky roof transitions. Verticality is also handled poorly in most situations as grinding up-hill eventually ends in going the reverse direction, disappointingly. So much for the fancy magnets in the roller blades. 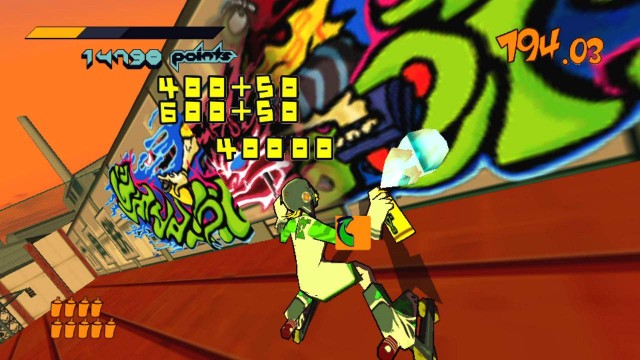 Jet Set Radio isn’t bad (or good), but damn is it old. So many of the design decisions just don’t make sense. For those that appreciate theme, there’s a lot to love about the game- everything, really. The characters don’t have much depth but their designs are interesting and they stand out among each other and the levels also have a lot of thought put into presentation, not to mention the awesome soundtrack. Those searching for a challenging action platformer will also find that here in Jet Set Radio, especially in the latter missions. However, those expecting a game about flow and freedom (in gameplay) will be disappointed- Jet Set Radio is just too small. The levels aren’t that big and most of the game has them cut into even smaller slices, so much so that players will feel choked- their curiosity stifled.

Really, the game is worth checking at least to understand what this strange counter-culture sensation is. The unfortunate (and supremely disappointing) truth is that the evidence for this game being just a slight improvement above mediocrity is in Jet Set Radio Future, the Xbox spiritual successor/remake of Jet Set Radio. It addresses momentum while grinding, level size, exploration and game flow- SEGA clearly knew what was wrong with Jet Set Radio, but that doesn’t make it magically disappear from this remake.